Today we are delighted to celebrate character actress Sandra Gould (1916-1999).

Brooklyn-born Gould went from small roles on Broadway in Thumbs Up! (1934-35) and Having Wonderful Time (1937-38) to radio, where she replaced Shirley Booth on Duffy’s Tavern, and became a 15 year regular on The Jack Benny Program. Her first screen appearance was in a musical comedy short called The Gay Nineties (1942) with Johnny Downs and Clyde Cook. Diminutive and round-faced, and with a distinctive high-pitched voice and Brooklyn accent, she found her niche as a bit payer in features and television, amassing over 100 credits over five decades. You can see her in small roles in The Girl from Jones Beach (1949), Excuse My Dust (1951), The Clown (1953), Beau James (1957), Imitation of Life (1959), The Ghost and Mr. Chicken (1966), Airport (1970), The Barefoot Executive (1971), Whiffs (1975) and The Nutt House (1992), among others. Starting in the 1950s, her TV work was more voluminous with guest appearances on dozens of programs, including I Married Joan, Our Miss Brooks, I Love Lucy, The Red Skelton Hour, My Three Sons, Love American Style, Columbo, Kolchak: The Night Stalker, and more. 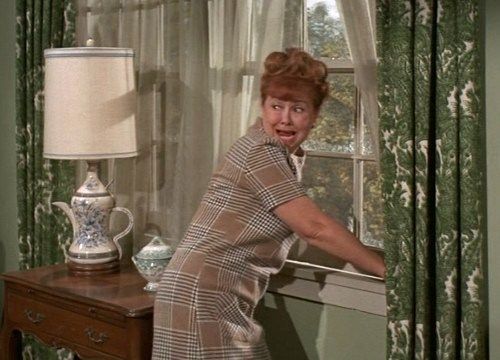 Gould was best known for playing the role of nosy neighbor Gladys Kravitz on Bewitched from 1966 through 1971, replacing Alice Pearce, who originated the role. Her role in any given episode would consist of her spying on the magical Stevens family across the street through the window, and reporting to her husband (George Tobias), “I tell ya, Abner, something strange is going on over there.” She would then cross the street to investigate and get more than she bargained for and run back screaming, crying and disheveled home to her husband, who never believed a word of what she said. But you never felt bad for her because she was such a terrible person.

Gould’s talents were in demand right up to the time of her 1999 death, due to complications following heart surgery.