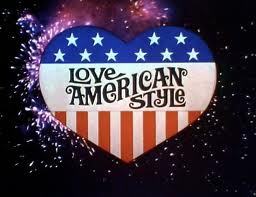 Not forgotten to the folks who actually watched it in the early 1970s…but younger people have been less fortunate!

I had last seen the show when I was about 7 or 8 years old, so was very excited to be able to Netflix the first couple of seasons several months ago. CR and I plowed through copious episodes in great marathon sessions, a feat made all the more hallucinatory by the fact that it was an anthology show with usually three separate stories in each episode. In fact, the concept for The Love Boat pretty much seems entirely lifted from Love, American Style. A better way to put it is that The Love Boat is Love, American Style…on a boat. (I have NO doubt that’s how it was pitched).

Each week, there would be celebrity guest stars (and normally — rather unlike The Love Boat — the stars were either hot at the moment or actual stars from Hollywood’s golden age)…and the stories in each segment would be some zany riff on changing attitudes about sex and relationships (things were changing at what must have seemed a bewildering rate to older folks at that point).

The tone of the show is strange to modern eyes and ears. Often they would seem to push the envelope and be really risque…but in an apparent bid to please all demographics, they always stopped shy of seeming to endorse anything that was too far out, and would always come back to the thesis that a legal marriage (between a man and woman, and only one of each) is best.

Still, the show is a gas — I would gladly watch all of those episodes again at this very minute. There is the episode with Arte Johnson and his blow-up date. The episode where Robert Reed plays a “swinger”. The episode where Paul Winchell falls in love with another ventriloquist. And the one where Karen Valentine and Robbie from My Three Sons are accidentally mis-assigned as college room-mates. Or the one where Red Buttons gets a surprise visit from the geisha girl who serviced him during World War II. Shall I go on? 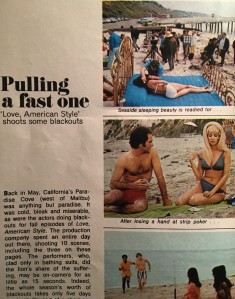 Tying the show together were these interstitial bits, sort of Laugh-In style burlesque black-out sketches featuring Stuart Margolin, who later played “Angel” on The Rockford Files. This may have had something to do with the fact that Arnold Margolin was executive producer. The latter also co-wrote the show’s theme song, which is a total ear worm. So play this clip at your own risk.