I confess to having something like a mental block when it comes to most of the screen work of the late Peter Falk (1927-2011). It’s entirely my hang-up. I’ll try to articulate what it is, or what I think it is. If you’ll read through to the end you’ll find that this is an essay very much in praise of Peter Falk, so don’t get your knickers in a twist.

We’ll start with his assets. Falk, intrinsically, was himself a character. With his gravelly voice, his glass eye, and his diminutive, scrappy stature, Falk had a very narrow range. So he made it his business to be extremely truthful, using the instrument he was given. That doesn’t mean he doesn’t create different characters. He played a different character for every role he was given to play, though the variations are often subtle given the idiosyncratic nature of his physiognomy. But this is what seems to be the rub: I love his greatest creation so much, everything about it, that every antibody in my blood seems to reject everything else he does. He brings so many tics and traits and touches to Lt. Columbo, that I can scarcely look at his other performances. And he’s in a lot! And I’ve seen a lot of it.

Falk studied with the great Eva La Galliene, who saw his talent and set him up with an agent in New York. He started out off-off Broadway and then wound up in gangster roles (and comedy gangster roles) in films like Pretty Boy Floyd (1960), Crime Inc (1960), Frank Capra’s Pocketful of Miracles (1961), and the very similar Robin and the 7 Hoods (1964). He’s in the classic comedy tributes It’s a Mad Mad Mad Mad World (1963) and Blake Edwards’The Great Race (1965). He’s in the Cassavetes‘ films Husbands (1970) and A Woman Under the Influence (1974). He was in the 1976 made for TV romance Griffin and Phoenix: A Love Story with Jill Clayburgh. Then another stretch of comedies: the Neil Simon films Murder by Death (1976) and The Cheap Detective (1978), followed by William Friedkin’s The Brinks Job (1978), and Arthur Hiller’s The In-Laws (1979). Then came Robert Aldrich’s last film …All the Marbles (1981), a kind of dry-run for G.L.O.W. with Falk in the Mark Maron part. This was followed by Cassavetes’ last film Big Trouble (1986) which reunited Falk with Alan Arkin, of The In-Laws. Followed by the Wim Winders films Wings of Desire (1987), and Faraway, So Close (1992). And The Princess Bride (1987), of course. There’s the 1995 remake of The Sunshine Boys with Woody Allen. A 2001 TV remake of The Lost World where he was cast against type as a Christian preacher . Etc etc etc.

That’s a lot of work, a lot of it with some pretty prestige people, yet I just can’t make it add up to a coherent body of work in my head. It’s like wet sand that won’t stick together. All I can see is Columbo, really, and just the first phase of Columbo, 1968 through 1978, not the later reboot (1989-2003).

Is it nostalgia? Because there certainly is a lot of that when I watch old Columbo episodes. Those enormous boat-like cars — they remind me of D-Day landing craft. The bad taste of Los Angeles in the 1970s, a kind of grotesque travesty of glamour. Every mansion looks chintzy and temporary; every suit looks like it’s made of nylon; every drinking glass looks like a give-away from the gas station.

And yet it’s still so atmospheric and stylish. The murders in the opening act invariably have a quiet moodiness not unlike the feeling one gets in Kolchak: The Night Stalker. Awful things happen at night, monsters bubble out of the the loveless, materialistic wasteland like maggots, drawn by the malevolent trilling of an angry flute. I find the seriousness of these opening beats to be crucial. Because, as we all know, Falk (and the show’s writers and directors) find MUCH humor in Columbo’s character and his quirks: his smelly cigars, his rumpled rain coat, his junky car, his homely basset hound, his perpetually unseen, almost mythical hausfrau (a bit of magic that was later spoiled by the advent of Mrs. Columbo). But humor is a well known Aphrodisiac — it serves to make us love Columbo. Our devotion to him is given increase by the admiration we feel when he proves also to be a genius. Like many classic detectives he notices small things, especially anomalies, and files them away until he can match them up with explanations. But on TOP of that, his real brilliance lies in his skillful manipulation of suspects. He is like a magician, presenting feints of misdirection, convincing the arrogant murderers of his stupidity, guilelessness and incompetence, before he springs the trap to catch them just a split second before they figure out that it’s all been a ruse. The schemers have been outschemed. And lastly, we love him because he is down to earth. He is without affectation, pretension or inflated self-regard, for all his gifts. A cigar smoking Italian guy on a civil servant’s salary, he is low man in the social hierarchy amongst all these WASPY and wealthy movie stars, executives, heiresses, spoiled playboys, book authors, art dealers and so forth (played by the delicious likes of Jack Cassidy, Patrick McGoohan, Robert Culp, Ray Milland, and the like). And yet these tin foil titans do not, cannot buy their way out of justice. The little guy — representing US — wins. He does all this, and he still never gets mean about it, and rarely even angry. He’s usually very gentle about the arrest. He takes no pleasure in ruining someone else’s life, even the horse’s asses who’ve been pushing him around and insulting him throughout the show.

The character had been created by writer William Link nearly a decade earlier on a 1960 episode of The Chevy Mystery Show. A live stage version called Prescription: Murder went on the boards two years later starring 70 year old Thomas Mitchell, who died in the middle of the run. As originally conceived, the character was older and beat-down. As retooled for Falk in the 1968 TV movie version of Prescription: Murder, the character was now middle-aged and beaten down. Another TV movie was made in 1971. Then Columbo was made part of the NBC Mystery Movie series, along with McCloud, McMillan and Wife, Hec Ramsey and other shows. (The very first episode was written by Steven Bochco and directed by the young Steven Spielberg! This is an auspicious beginning). The show was a much-beloved Sunday night ritual in our house, but Columbo was cherished past all measure…waning perhaps only towards the end of the original run, circa 1978 when Falk’s hair was getting puffier, and the “one more thing” ritual getting a bit threadbare. 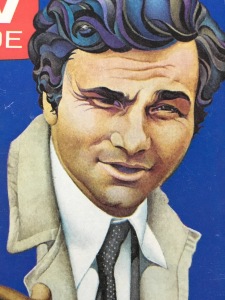 At any rate, Columbo is Peter Falk’s Hamlet, or if you prefer, his Holmes. He seems to have put 110% of his ingenuity into the role, and when you see him just playing an ordinary part, giving an ordinary performance…I find that it somehow lacks the same spark and magic, the romance is gone somehow. Forgive the metaphor, but it feels like perfunctory lovemaking from someone you know to be capable of being a Casanova. I’m not saying I don’t like some of his movies. Murder by Death and The In-Laws are particular favorites. But of course those are intricate comedy machines with much else to sweep us along in addition to his performance.

At any rate, Columbo is my idea of what a true American hero looks like. He doesn’t punch things or shoot things, he solves things. He is democracy in action — in this setting, there were opportunities for this brilliant character to get a dream job and to shine in it. A job that allows him to enforce the most sacrosanct of human laws: Thou Shalt Not Kill, and to bust whoever commits it, no matter how highborn. Since we seem to be living in an age of fantasy-as-politics, in my sweetest of dreams, HE is the man who’ll put Donald J. Trump in the back of a squad car in handcuffs.