Jack Benny: Not Stingy With the Laughs

JACK BENNY: (to orchestra leader upon entering) How’s the show been going so far?

JACK BENNY: Well, I’ll put a stop to that.

Except for Will Rogers (who doesn’t count because he was a saint) Jack Benny was the most beloved figure in show business history, by both the public and his colleagues. So loved was Benny that Bob Hope, who apparently loved no one, delivered the eulogy at his funeral. In it, Hope called Benny “the undisputed master of comedy timing”, a sentiment that is universally shared to this day. It was that skill as a comedian that allowed Benny to become one of the handful of performers to conquer stage, screen, radio and television.

He was born Benjamin Kubelsky in Waukeegan, IL in 1894. Contrary to his self-created popular image, he was actually an an excellent violinist. He began playing at age six, was considered a child prodigy, and was sent to take lessons from a prestigious teacher in Chicago. But Kubelsky was not cut out for long hours of study. He dropped out of music lessons – and school – in the 9th grade. At age 16 he began working as a violinist at the Barrison Theatre, a vaudeville house. He worked there for two years, until the theatre folded. At the point, he formed an act with Cora Salisbury, the Barrison’s 45-year old pianist: “Salisbury and Kubelsky, from Grand Opera to Ragtime”. A lawyer for a violinist named Kubelik sent him a letter ordering him to change his name (it was too similar to his client’s), so he became Ben Benny.

In 1914, Cora dropped out, to be replaced by a young man named Lyman Woods. Benny and Woods became a top second rate act, earning $3-400 a week, very good money for those days. The hook was that the two of them mugged and made faces while they played. In 1917, the team got a shot at the Palace, but they bombed, mostly because they followed an animal act and the audience hadn’t arrived yet. There was no time to mope about it, though. Soon thereafter, Jack Benny was drafted into World War I. Oddly enough, it was Benny’s service at the Great Lakes Naval Training Station that provided him with his real big break.  When asked to perform at a camp show, he first essayed some classical music on his violin – which of course went over like a lead balloon with the mostly working-class 18-25 year old men who comprised his audience. A fellow performer William O’Brien (later to become a famous movie star under the name “Pat”) urged him to go out again and pad for time. Instinctively, Benny told some jokes he knew, and he scored a big hit. He was recruited next for a touring Navy show The Great Lakes Revue which is very successful. Now he had a couple of years as a comedian under his belt.

In 1919, he returned to vaudeville as Ben K. Benny, doing “Fiddle Funology” a single act wherein he told jokes, sang and played the fiddle.

Then it happened once again, like something out of one of his own routines: a lawyer for bandleader Ben Bernie wrote insisting that he cease using his current stage name, it being too similar to his client’s. At this point, Benjamin Kubelsky finally became Jack Benny. During these years, Benny began playing the violin less and less, until it became almost completely vestigial. Benny clutched it as a prop for confidence during his monologues, seldom playing it except for the occasional comical-dissonant scratchings. At one point, he partnered up with Dorothy MacGuire, better known as “Penny Singleton” the actress who played Blondie in the film series based on the comic strip).

You can get a really cool (and rare) glimpse of Jack Benny the pre-radio vaudeville star, stand-up comedian and m.c. in the movies The Hollywood Revue.

Benny’s long career in broadcasting started in 1932 with the Canada Dry Ginger Ale Program and continued with a half dozen other sponsors through 1955, by which time he’d already begun his tv series, which ran 1950-65. Over the course of those 33 years, America followed the adventures of “Jack Benny” a wholly fictitious character who was famously stingy, self-centered and vain (claimed to be 39 years old for the last 40 years of his life). Around him grew a cast of characters almost as beloved as he was: announcer Don Wilson, bandleader Phil Harris, Irish tenor Dennis Day, his “manservant” Eddie “Rochester” Anderson, Mel Blanc (in various character roles) and Benny’s wife Mary Livingstone.

Benny continued to do a couple of tv specials a year in the remaining decade of his life; indeed, he was planning one at the time he died in 1974. 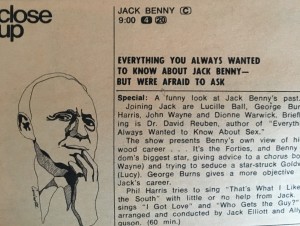 These specials were how I first knew Jack Benny — he was a much-beloved contemporary fact of life when I was a kid, and I adored him. It was only later that I was able to go back and discover the famous Benny of earlier decades. He was also very present on other peoples’ talk and variety shows, to wit:

Benny also had a movie career from 1930 through 45. Though he never set the world on fire as a movie star, he did some very solid pictures, including George Washington Slept Here (1942) and Ernst Lubitsch’s 1942 To Be or Not To Be, which was remade by Mel Brooks in 1983. A bad experience with his last film The Horn Blows at Midnight  (1945) persuaded him to retire from the movies. His last film was to have been Neil Simon’s The Sunshine Boys (1975), in a part written for him, but he died before shooting began, and so was replaced by George Burns. I think Burns would agreed with me that Benny would have been much, much funnier in the role.

To learn about the roots of vaudeville, including stars like the great Jack Benny, consult No Applause, Just Throw Money: The Book That Made Vaudeville Famous, available at Amazon, Barnes and Noble, and wherever nutty books are sold.