On the Sometime Genius of Mel Brooks 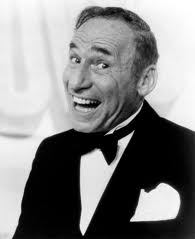 That he is one of the greatest comic minds of the 20th century (and a little of the 21st) there is little debate. So successful an impression did he make on the minds of the public that he has become the gold standard for a certain kind of comedy that existed long before he came along, and will exist long after he passes, the stylistic parody or spoof.  I can’t give an uncritical thumbs up to everything he does, as some people seem to do, but when he has been brilliant, he has been SO brilliant — like comedy lightning.

His style of comedy is absolutely a product of his origins as an entertainer in Catskills resorts after the Second World War. Initially he was a musician (drums and piano) but then he began filling in for comics, eventually working his way all the way up to being the Tummler at Grossinger’s — that’s like being head jester for the Borscht Belt. One liners, rim shots, unabashed corniness, “anything for a laugh”, a bit of music, a bit of show biz, this would be the foundation of his comedy style.

He met Sid Caesar while performing at these hotels. Caesar too had gone from being a musician (sax player) to being a comedian while working in the Catskills. In 1949 he hired Brooks to be one of his writers when he got his first tv show, The Admiral Broadway Revue. Brooks was to be one of the key members of his legendary writing staff until 1957.

From 1959 through 1962, he performed what was essentially a two man vaudeville routine with Carl Reiner (also part of Caesar’s writing staff and stock company). Reiner, as he often did on Your Show of Shows, played straight man…Brooks was the low comedian, a “2,000 Year Old Man” who, for some reason had a Yiddish accent. This became a hit on television and on comedy records, keeping Brooks before the public.

In 1965, he began his career as a spoofmeister, by creating (with Buck Henry) the legendary tv sit com Get Smart, which ran until 1969.

By then of course he had made The Producers (1968), one of the most perfect comic motion pictures of all time: every angle, every line, every take, every performance, every song, every moment just the RIGHT thing, and all of it adding up to something greater than its parts. (Though the end is a little abrupt. A saving grace is that it seems derived from Warners Brothers cartoons).

This is a good opportunity too to plug Brooks’ SECOND film, the seldom seen or even mentioned any more The Twelve Chairs (1970). This was a personal favorite of mine in my early 20s, but I haven’t seen it since. I used to think of it is Brooks’s last “real” (i.e., non-parody) movie, although later he would make the atrocious Life Stinks (1991). It casts Frank Langella, Ron Moody and Dom Deluise as a bunch of guys scrambling around early Soviet Russia trying to get their hands on some jewels. It’s based on the same source material as Fred Allen’s It’s In the Bag.

Next came the first of what was to become his signature type films, Blazing Saddles (1974). As I wrote at length in this earlier post, while I enjoy many aspects of this film, I also think it has many serious flaws which keep me from enjoying it completely, and so can’t sign on to that unadulterated enthusiasm so many people have for it. I am much more enamored of Young Frankenstein (1974), which I think of as Brooks’s second (and probably last) work of total comedy perfection (and at least some of that due to the contributions of Gene Wilder, whose idea it was).

In here came his terrific second spoof TV series, the Robin Hood parody When Things Were Rotten (1975). His first mis-step was Silent Movie (1976), which failed due to his inadequate understanding of the genre. His Hitchcock parody High Anxiety (1978), however was spot on — seems to get better every year. I saw it at the drive-in when it came out and was majorly obsessed with it – -I even bought the sound track album.

In 1980, Brooks’ first serious competition of his career arrived when the Zucker Brothers released Airplane! , a deadpan parody of the Airport series of disaster films that rivaled or exceeded Brooks’ joke-per-minute ratio on his best day. I was a huge fan of the movie when it came out, and began to think of Brooks as passe, so much so that I didn’t pay any attention to History of the World Part One when it came out a year later.  I watched it for the first time about five or ten years ago and was surprised to find that I liked it a lot (or most of it, at any rate). The Roman segment, by the way, is lifted whole cloth from the Eddie Cantor vehicle Roman Scandals!

But Brook’s hot streak really ended about there. I saw Spaceballs (1987) when it came out less because of Brooks than because it had two of my then-favorite SCTV comedians John Candy and Rick Moranis in it. My extended post about my revised admiration for the movie is here. (Meantime, he had some interesting experimentation with mainstream moviemaking, producing The Elephant Man, and starring in a remake of To Be Or Not to Be, among other films). By the 90s, though the comedy well seemed to have run dry: Robin Hood: Men in Tights (1993) and Dracula: Dead and Loving It (1995) are both pretty terrible. And from here it was on to making musicals out of his older scripts.

I learned something cool this morning. He has something very old in the hopper….an adaptation of Goldsmith’s She Stoops to Conquer he originally intended to be his third movie, but could find no backer for. Make it, Mel! That would be awesome!

To find out about  show business, consult No Applause, Just Throw Money: The Book That Made Vaudeville Famous, available at Amazon, Barnes and Noble, and wherever nutty books are sold.