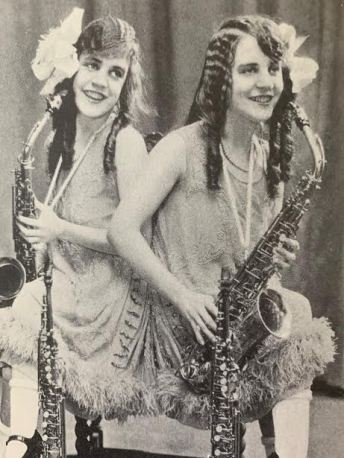 The Hilton Sisters (no, not Paris and Nickey–NEVER them) were the ultimate sister act – they were Siamese Twins, joined at the base of the spine. Jack Benny told an anecdote about one night answering a knock on his dressing room door and receiving Daisy and Violet Hilton, whom he’d performed with on a bill many years before. “Remember us?” one of them asked. He did. 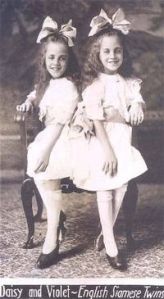 The girls were born in Brighton, England in 1908. They first worked in circuses, but the mitigating factor was that they were both too pretty and too talented to stay in a freak show. They played clarinet and saxophone and did an impression of the Duncan Sisters; that already made them too classy for a sideshow. 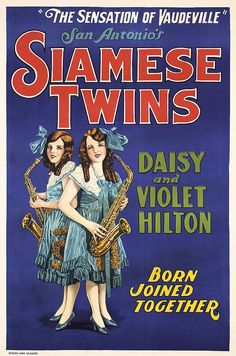 Vaudeville manager Terry Turner realized their potential and got them a booking on the Loew’s circuit in 1925. They received top dollar for their act: $2,500 a week, a sum very few vaudeville artists were privileged to receive. One of Bob Hope’s very first jobs was as a dancer, touring with the Hilton Sisters.

The girls even had a film career, appearing in Tod Browning’s 1932 film Freaks and a 1951 film, supposedly based on their real life called Chained for Life.

The 1997 musical Sideshow is loosely based on their lives. 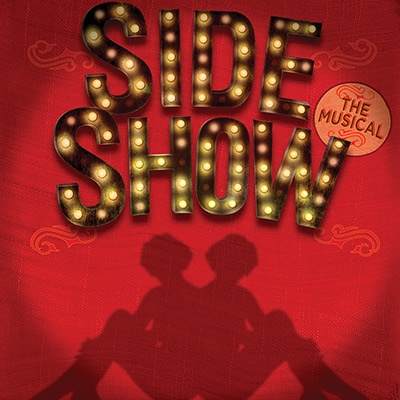 In 2013, Leslie Zemeckis, director of Behind the Burley Q, made a new doc about the Hilton Sisters called Bound by Flesh. Read my review here.

Daisy and Violet Hilton were inducted into Coney Island USA’s Sideshow Hall of fame in 2014.

To learn about the roots of variety entertainment, including unique acts like the Hilton Sisters, consult No Applause, Just Throw Money: The Book That Made Vaudeville Famous