Born Yansci and Rozicke Deutsch in Budapest in 1892, the girls moved to Brooklyn at age 5, where they quickly became “Jennie” and “Rosie”. Their mother enrolled them in ballet school; this was to be the full extent of their formal training. A completely unreliable Hollywood movie has them doing Hungarian folk dances in a social club in 1904 to cover their uncle’s gambling debts. The verifiable record has them debuting professionally at Keith’s Union Square in 1909. Legend has it that they chose the name Dolly because a friend said they were as cute as little dolls. 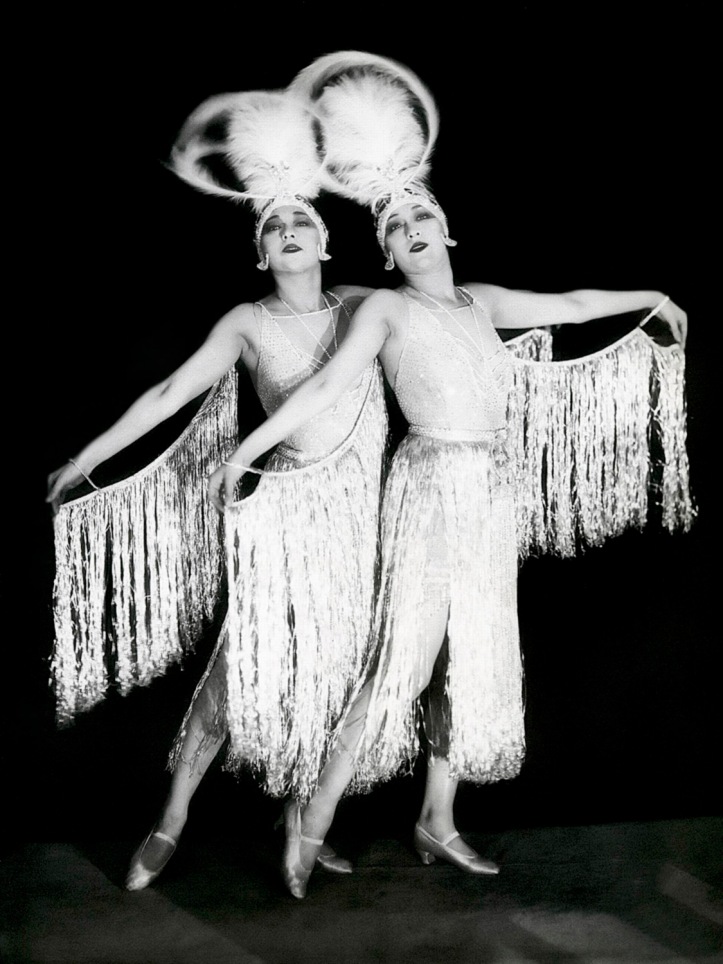 In 1911, Ziegfeld booked them for the Follies, and in so doing created the personae and mystique that was to be the basis of all their future stage (and offstage) success. For their Siamese twin dance routine, Ziegfeld draped them in fabulous costumes of the sort that were to be their mainstay throughout the rest of their careers, accentuating the latent exoticism of their almond-shaped eyes, black hair, and small, svelte bodies, with Asiatic finery, jewels, head-dresses and finger-cymbals. They seemed to be from the Far East, and back then, Hungary was pretty far east. To this reviewer, the whole concept bears an unfortunate resemblance to the miniature twin goddesses in the 1961 Japanese horror film Mothra. “Return the egg! Please, return the egg!”

Throughout their careers, they were as famous for who they were dating, who they were marrying, and how much money they had, as for any stage “accomplishment”. They went around with the likes of Diamond Jim Brady and the Prince of Wales. When they were marrying, they tended to do it tandem, perhaps each independently following the rhythmic imperatives of their identical DNA. In 1913, Rosie married Jean Schwartz, author of the Jolson hit “Rock-a-bye Your Baby (With a Dixie Melody)”. The next year, Jenny married Harry Fox, inventor of the Fox Trot.

Jenny and Fox made a sort of team for awhile, appearing at the Palace and Hammerstein’s Victoria together and in revues like the 1915 Stop! Look! Listen! Jenny and Dolly starred in separate films in 1915, Rosie in D.W. Griffith’s The Lily and the Rose, and Jenny in The Call of the Dance. In 1916, they were back as a permanent team again, starting a relationship with the Palace that was to last many years, and co-starring in the Far East espionage thriller The Million Dollar Dollies. 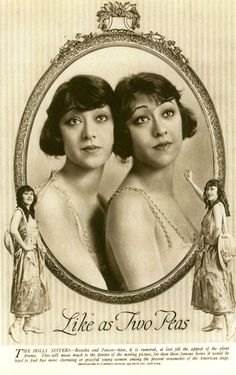 The Dollys not only had twin marriages, they had twin divorces. Jenny divorced Fox in 1920; Rosie and Jean Schwartz split up in 1921. In the 20s, Paris became their home base, becoming the toast of the town with engagements at the Folies Bergere and the Casino de Paris. Their last American engagement was the Greenwich Village Follies of 1924.

Like Josephine Baker and Peggy Hopkins Joyce, the Dolly Sisters became closely identified with the spirit of the 20s, the opulence, the decadence, the frippery and the frivolousness. They mattered not for how they sang or danced, but how they looked while doing it. Nor did they have any desire to be artists. It was clear that, to them, the stage was just a means to an end. Once they were well fixed (by the late 20s), they retired, and spent all their time dating royalty and gambling in Monte Carlo.

In 1927 Rosie married tobacco heir Mortimer Davis, whom she traded in for department store heir Irving Netcher in 1931. In 1933, Jenny was involved in a major auto accident with her fiance, the French aviator Max Constant. She endured 15 separate operations to restore her once matchless face, selling off her jewelery in the process. In the end, it was futile; her looks were forever gone. It is said that she regretted having survived without her beauty. In 1941, she proved it by hanging herself.

In 1945, George Jessel made the lives of the Dollies into a preposterous bio-pic starring June Haver and Betty Grable. The film was a huge hit in its day – but it has nothing to do with the Dolly Sisters. In 1962, the seventy year old Rosie unsuccessfully attempted suicide with an overdose of sleeping pills. She was to live on in ignominious old age for another eight years.

To find out more about vaudeville past and present, including the Dolly Sisters, consult No Applause, Just Throw Money: The Book That Made Vaudeville Famous, available at Amazon, Barnes and Noble, and wherever nutty books are sold.