Bob Hope: Master of All Ceremonies

Perhaps no more polarizing figure exists in these annals than that of Bob Hope. Years ago, a baby boomer friend spotted a copy of Don’t Shoot, It’s Only Me, Bob Hope on my shelf. “In that case,” he said, “I’ll be sure to take careful aim.” No doubt for this scraggly ex-hippie, Hope was the enemy – a mummified square who performed for the troops in Vietnam, starred in creaky, stodgy, phoned-in movie comedies, and staged unbelievably unhip variety shows for which he booked acts ranging from Barbara Feldon to the U.S. Marine Corps Glee Club. A baby boomer’s vaudevillian would of course be an act more like the Marx. Bros – anarchistic, irreverent, anti-everything. Hope, however, is the epitome of the slavish flag-waver, the foremost heir to George M. Cohan of the post-war period. Hope was America’s premiere pro patria stand-up comedian, whose subject matter tended to be girls and sports. (“Say, how about that Dorothy Lamour?”, and “Hey, how about those Dodgers?”) He symbolizes so much about America. In him one can glean much that is characteristic of the successful vaudevillian: the breezy self-confidence, the brashness, the unapologetic affluence. How disorienting, in light of all that, to learn that Hope was born a foreigner! 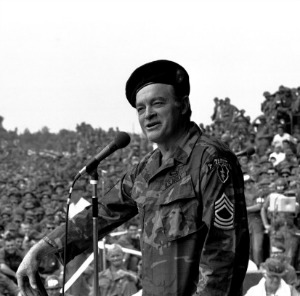 He was born Leslie Towne Hope on May 29, 1903 in Eltham, England. His father was a bricklayer, and the family was extremely poor. (Hope was one of seven children). Hope’s father moved the family to Cleveland, OH in search of better opportunities. For Hope senior, there weren’t any. His son would eventually be one of the richest men in the country.

As a teenager he saw Frank Fay perform at Keith’s 105th Street in Cleveland. (No doubt he told himself, “If there’s room for an arrogant jerk like that in show business, surely there’s a place for me!”)  In 1915, he got his first performing experience (in the same way Berle had gotten his) in one of the Charlie Chaplin contests that were so popular at that time. 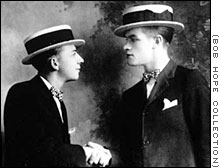 Hope quit school at age 16, took dancing lessons, and started singing with a  quartet. He was part of that song and dance team Durbin and Hope that performed in a revue starring filmdom’s disgraced expatriate Fatty Arbuckle in 1924. When Durbin died of TB, Hope teamed up with another hoofer named George Byrne. Among their memorable engagements in the three years they were together was a tour with Daisy and Violet Hilton, the Siamese Twins. In 1927, at a gig in New Castle, Pennsylvania, Hope was asked to announce upcoming shows – his first true assignment as a monologist. He threw in some jokes and Frank Fay’s walk and got big yuks. Hope decided that he would be more successful as a single at this point, and fired Byrne. He moved to Chicago that year and – after several weeks without work — began a successful run as m.c. at the Stratford theatre, where he went over big. As added joke fodder, he hired a girl named Grace Louis to play a Dumb Dora for part of the act.

Making the leap to New York, Hope got booked at Proctor’s 54th street. He consciously got this gig as a showcase to impress the Keith booker Lee Stewart. He soon learned that this was the toughest house in the city and that his turn would be a make or break moment. With typical resourcefulness, he devised a show stopping opening line while waiting in the wings to go on. Prior to his entrance, the stage was occupied by a woman named Leatrice Joy who was famously divorcing the actor John Gilbert. So as Joy walked off and Hope walked on (what a felicitous phrase!), Hope snapped to a woman in the audience, “No lady I am not John Gilbert”. The line slayed the audience and from there they were eating out of his hand. He got several curtain calls, and William Morris signed him to a three year contract with the Keith organization.

Hope’s strength was his comic manner, as opposed to his material. Something about his face, the arch eyebrows, the devilish glint in his eyes just before he delivered a punchline helped him sell it. His personality was brash and bold and he instinctively knew how to get a joke over, no matter how bad. Often the material was so weak in the early days (and frankly also the later ones) that in 1930 he hired the consummate vaudeville gag man Al Boasberg to write jokes for him. Boasberg wrote also for Burns and Allen, the Marx Bros. and others before being taken early by a corned beef induced heart attack. 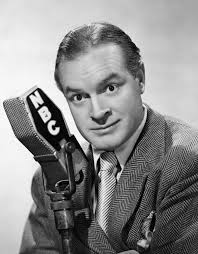 Hope was next booked for a revue called The Antics of 1931 at the Palace on a bill with Bea Lillie. He didn’t set the world on fire in the revue, but he got screams hosting something called “Celebrity Night at the Palace”, a Monday night all-star show that gave performers from other shows on Broadway an opportunity to see current performers on their night off. From there, it was The Ballyhoo of 1932, and a succession of other revues and book musicals through the mid-30s, radio throughout the 30s and 40s, film from The Big Broadcast of 1938 (in which he first sang his signature song “Thanks for the Memories”) through Cancel My Reservation (1972), live tours for the military in WWII, Korea, Vietnam and the Gulf, and periodic television variety shows in which he helped keep vaudeville alive for another 3 decades.

His best films were in the 40s, especially the so-called “Road” pictures with Bing Crosby, in which they formed a sort of loose comedy team. Hope was also at the top of his form during these years as the sole star as such comedies as Monseuir Beaucaire (1946) and My Favorite Brunette (1947). Woody Allen cited Hope’s film persona during this period as a major influence. However, with the 1963 film Call Me Bwana, it is generally agreed that the quality of Hope’s output for the silver screen took a steady and permanent nosedive. At this point, Hope was just phoning it in.

Hope started in show business at just the right time. He came to vaudeville late in its evolution; his ascent coincided with its demise, but he managed to get a foothold elsewhere before it winked out. While there was a vaudeville he was glad to work there but by the time it died he didn’t need it any more. He stepped from his dates at the Palace to book musicals and radio as one might step off a ship that is going under. Though he never particularly distinguished himself in vaudeville per se, it was his training ground. He spent the better part of a decade on its stage, learning timing, improvisation and developing stage presence. 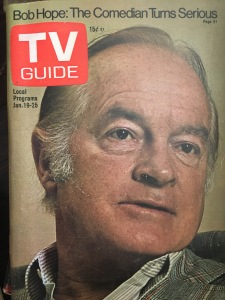 Traces of the vaudevillian remain throughout his 70 year career, notably his noticeably effeminate “swishy” style of walking on and off stage, which he consciously borrowed from monologist Frank Fay (as did Benny). Hope was still doing regular tv specials right up until the early 1990s, when his frail body simply couldn’t do it anymore.

We have an entire section of posts related to Bob Hope on Travalanche! Read the rest of them here.

To find out more about the history of vaudeville and stars like Bob Hope, consult No Applause, Just Throw Money: The Book That Made Vaudeville Famous, available at Amazon, Barnes and Noble, and wherever nutty books are sold.