You MUST See “Bound By Flesh” 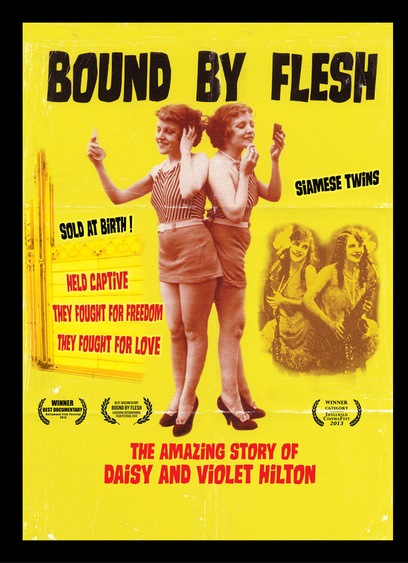 Everyone within the sound of my voice: you MUST see Leslie Zemeckis’s wonderful, definitive new film about the Hilton Sisters. As the Mad Marchioness said last night, Zemeckis is really carving out a special niche for herself as a trad show biz documentarian. First the terrific Beyond the Burly Q , which kind of has the last word on the post-burlesque of the mid-twentieth-century (by virtue of all the interviews she got with the old gals before they expired); and now Bound by Flesh, which is as eloquent about the entire world of sideshow as it is about the amazing and ultimately sad lives of the Hilton Sisters.

You can get a little background on these conjoined starlets at my previous post here. But Zemeckis’s film told me much that I didn’t know, or didn’t realize. To wit:

* I always think of the sisters as English, because they were born in Brighton England, but they spent the bulk of their formative years based out of San Antonio, Texas, which, come to think of it, explains their accents.

* Up until the mid twentieth century it was extremely rare for conjoined twins to survive beyond infancy. I mean, we all know they’re rare, but perhaps we don’t realize HOW rare. Basically, all of them who ever lived are well known.

* Their story is unexpectedly moving and thought-provoking, and Zemeckis treats it with heart, humanity and balance. As in her burlesque movie, she gets into the nitty-gritty of the question of exploitation, and we hear expressions of both sides of this issue. On the one hand, a series of guardians mistreated and abused them. On the other hand, they were cared for and didn’t have to worry about food and a roof over their heads. UNTIL they fought for and achieved their emancipation; then they most assuredly DID have to worry about those basic facts of life. Just like the rest of us, you might say. Except…uh?

And their story has particular resonance because it is so extreme. All “born freaks” were the royalty of carnivals and sideshows and thus made lots of money. But the Hilton Sisters were an extreme case. They were perhaps the only human anomalies to ever make a hit in VAUDEVILLE because they were beautiful, could sing in harmony and play musical instruments. And not only that, for a time, they were commanding TOP vaudeville salaries, at one point $2,500 a week, the sort of money that only the Eva Tanguays and Sophie Tuckers were making. In today’s money that’s probably the equivalent of ten times that. And they were of course in Tod Browning’s Freaks. So when they fell, the fall was so much greater. They went from vaudeville, to burlesque (a bit seedier), back to carnivals, to their depressing exploitation film Chained for Life, to operating their own hot dog stand (at which they literally cooked food and served customers), to being virtually homeless and finally finding work at a local supermarket. How those brave, brave ladies could have faced the day sometimes…it’s inspirational even as it’s sad. Sometimes it’s an act of heroism just to be alive.

And Zemeckis gets the very best talking heads in this film, not just people who knew the Hilton Sisters, and folks from San Antonio’s local Witte Museum, but King of the Sideshow Ward Hall, and the great James Taylor of Shocked and Amazed and the American Dime Museum.

Chillun, this movie is REQUIRED VIEWING. If you can’t make it to the theatres where it’s playing, see it streaming on Amazon like we did last night. Here’s all the dope: http://www.boundbyflesh.com/