The Duncan Sisters: Topsy and Eva 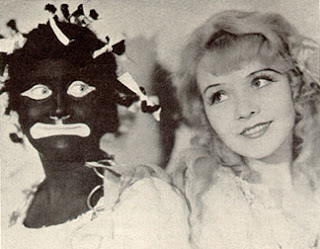 Obligatory Disclaimer: It is the official position of this blog that Caucasians-in-Blackface is NEVER okay. It was bad then, and it’s bad now. We occasionally show images depicting the practice, or refer to it in our writing, because it is necessary to tell the story of American show business, which like the history of humanity, is a mix of good and bad.

Vaudeville encyclopediast Anthony Slide calls them “one of the greatest sister acts on the vaudeville stage”. Though they were known and loved for their wholesomeness, reportedly Rosetta (1896-1959) was an alcoholic lesbian and Vivian (1899-1986) was married to a closeted gay man who wanted to involve her in threesomes. They are best known for their Topsy and Eva act, from Harriet Beecher Stowe’s 1852 anti-slavery novel Uncle Tom’s Cabin, which they milked for years past the point it was considered polite to appear in blackface.

The symmetry of their act in theme and presentation was no doubt part of its appeal. Eva, often referred to as Little (or sometimes “Li’l”) Eva, is an unnaturally good, angelic character along the lines of Dickens’ Little Nell. Among other good works, she teaches Uncle Tom to read—before being carried up to heaven herself as a literal angel. Eva was abetted in her portrayal of the character by her fair complexion and naturally flaxen curls. Though Rosetta was similarly endowed, as Topsy, she was corked from head to toe with a black wig done up in pickaninny pigtails. Topsy, by contrast, was, well, to use her words: “I’se mean an’ ornery, I is, mean an’ ornery”. Topsy is a wicked little thing who likes to steal molasses. Just get a load of this dialogue, (actually an intertitle) from their 1927 silent film Topsy and Eva. In the scene, Topsy is praying: “You got plenty of white angels in heaven—hab a black one! stop twangin’ on them harps an’ lissen to me! Ef yo’ let L’il Missy lib Ah won’ lie no mo’ er. Ah won’ steal no mo’ er. Ah won’ do nuthin’ no mo’! Ef yo’ don’ want th’ debbil tuh git me away from yo’—yo’ bettah act quick! An’ Ah won’ ask yo’ to make me white lak snow, but jes’ a nice light tan!”

This act, consisting of a virtuous white girl and a vicious, ungovernable back urchin must have gone like gangbusters in the south. Undergirding it all was a treacly cutsey-ness unfathomable to most modern audiences. Picture (in later years) the 50-ish Duncans tricked up in petticoats, gamboling, skipping and cooing like 6 year olds, one of them in blackface. One of their songs goes “I Gotta Code in My Dose.” Never mind the kleenex, is there a barf bag handy?

At first they were a more or less conventional sister act. (One of their hits was the classic “Side by Side”, perhaps the ultimate sister act song). Starting out in 1916 they did a yodeling act and were discovered by Gus Edwards. In 1917 they played the Fifth Avenue Theatre. From the start, Rosetta was the comedian, Vivian, the soubrette. In 1922, they played the Palace with an act called “’s that alright”.

1923 was the crucial year. That was the year they mounted their full production of Topsy and Eva at the Alcatraz Theatre in San Francisco. For the remainder of their careers they toured some version of this show throughout the U.S. and internationally. They retired in 1942, but started performing again in nightclubs a decade later. When Rosetta killed herself in a car crash in 1959, Vivian went solo for a time. Eva followed Topsy up to heaven in 1986.

To my surprise, I found some film of them playing their famous characters. I feel it is of historical value and thus share it, even if the modern sensibility finds blackface characterizations offensive. Better to look the thing in the face than pretend it never existed.

To find out more about vaudeville past and present, consult No Applause, Just Throw Money: The Book That Made Vaudeville Famous, available at Amazon, Barnes and Noble, and wherever nutty books are sold.