“THE GREATEST SINGLE WOMAN SINGING COMEDIAN IN THE WORLD”

Vaudeville’s greatest diva  (and that’s really saying something), Bayes was a complex mixture of training, talent and temperament. In vaudeville temperament was a sort of status symbol. It was something only the biggest stars could afford – or they’d be canned. A temperament was like a Rolls Royce, an entourage, a suite of rooms at the Ansonia and a gown by Erte. This was a great unspoken. Managers forgave “attitude” in general because these people were stars…box office…money.

Nora Bayes was all that. Her salary was among the very highest earned by a vaudevillian, but for good reason. She was considered second to none in dramatizing a song—audiences were wild about her. Above all, she was a class act, maintaining a level of dignity and style one associates with legit actresses and opera singers. At the height of her fame, she traveled with a private railroad car in which she carried a full entourage consisting of her two children, their governess, her maid, her piano player and his wife. Today, if you encounter her name at all, it is probably on the sheet music to the song “Shine On, Harvest Moon” which she co-wrote with her husband Jack Norworth. 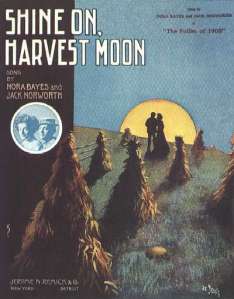 She was born with the unprepossessing name of Leonora Goldberg in 1880, in either Chicago, Milwaukee or Los Angeles depending on whose account you believe. Her parents were devoutly Orthodox Jews—she had to tell them her singing lessons were for religious purposes. As soon as she turned 18, she ran away and went into show business.

She took an Irish last name to suit her largely Irish repertoire. She took a roundabout road to perfection. After debuting in 1899 at the Chicago Opera House, she played in stock companies where she learned about acting, then moved to Paris, where she took singing lessons. these experience gave her a high degree of perfection and polish. Contemporaries praised her for her voice control, her diction, and her ability to dramatize a song. The latter quality is what inspired write Douglas Gilbert to call her “the American Guilbert”. The elegance and class Bayes naturally possessed were mere icing on the cake. She played the Palace in London before getting her big break in the U.S. – a hit turn singing Harry von Tilzers’ “Down Where the Wurzburger Flows” at the Orpheum theatre in Brooklyn in 1902. for years thereafter as “The Wurzburger Girl”, which sounds more like a curse than a blessing.

In 1907 she hit it big at Proctor’s 5th Avenue theatre and appeared in the very first Ziegfeld Follies. In 1908 she married singer/piano player/composer Jack Norworth,her second husband of five. Bayes, like most headlining women, attempted to make a eunuch out of all of her husbands. Norworth, whom at that time had the lesser profile and salary, was forced to accept the billing, “Nora Bayes, assisted and admired by Jack Norworth”. He also had to walk Nora’s dog, go outside to smoke, etc. So much for  “The Stage’s Happiest Couple,” as they were also billed. Well, 50% happy, at any rate.

In 1908 the pair played the Follies together where they introduced “Shine On, Harvest Moon.” (Bayes often got songwriting credit but generally had only tweaked a line or two of any song she was involved with. Norworth wrote and co-wrote many hits besides the aforementioned, including “Take Me Out to the Ball Game” and “Meet Me in Apple Blossom Time”. ) Apart from vaudeville, the couple also appeared in legit musicals together, such as The Jolly Bachelors (1910) and Little Miss Fix It (1911).

But, if you wrote a song as popular as “Take Me Out to the Ball Game” I don’t guess you’d be walking anybody’s dogs for too long. Norworth divorced her in 1913. He went on to hit it big in England soon thereafter. Bayes attempted a reconciliation but Norworth was fed up by that point.

Bayes’ health began to fail while she was playing the Empire Theatre in London in 1914. Doctors sent her to a German sanitarium to recover from “anemia” and “exhaustion”, but it was really malignant cancer. She was receiving radium treatments when the outbreak of World War I caused her to flee the country. Meanwhile, the press had accidentally reported that she had died. The twin whammy of the false death reports and the “dramatic escape” from Germany splashed her all over the front pages, and she was more popular than ever.

In 1915 she starred in the revue Maid in America and opened at New York’s Palace with a three man chorus as back-up.

There is a correlation (impossible to say whether it is a causation) between Bayes failing health and her increasing temperament. Pain has been known to make people cranky, and Bayes definitely was that. She blew a good thing in 1915 by demanding more money from the United Booking Office, canceling $33,000 worth of bookings. She broke a 1916 contract over her refusal to do a Thanksgiving performance. 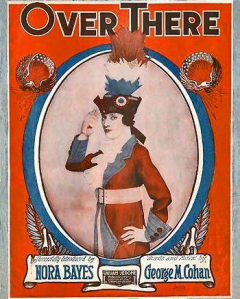 In 1917, probably because of her strong association with World War I, George M. Cohan got her to introduce his new song “Over There”. The following year she starred in The Cohan Revue of 1918 as well as a show called Ladies First. That year she also opened the Nora Bayes Theatre, which has been long since absorbed by other real estate.

In the 20s she became more erratic, replacing the tried-and-true formula of light comic and sentimental songs in her act with long rambling monologues about her adopted children. The audience didn’t respond to this much as entertainment and her bookings start to evaporate, her salary, contract. In 1924 she worked the Palace in London for 1/10th of her former salary, and was #3 in billing. In 1926, she worked her way back up by  insinuating herself into a routine of Cissie Loftus’s. Loftus did a well-received impression of Bayes, who would then join her on stage. The bit was so successful, that Bayes managed to use it to get back to Keith’s Palace (with Loftus of course) at something like her old salary. By 1927 she was doing well again, and had even developed a sketch with the young Jack Benny and the team of Burns and Lynn.

But the sands of time had run out. At a National Vaudeville Assocation benefit, she had a run-in with Sophie Tucker about a spot on the bill. She was so difficult that the Palace booker Eddie Darling physically pushed her into the street and closed the door on the street, stating “Miss Bayes, you will never play a Keith theatre again.”

She never did, although if she lived, she might have. Performers were frequently given such categorical ultimatums, only to have them rescinded when audience demand made a booking irresistible. Bayes was box office, and Darling did weaken at a moment fraught with poignant irony. Bayes invited Darling to her house for a midnight party in 1928. He arrived, but only she was there. She sang her old songs to him and  convinced him to put her publicity photos up in lobby, as though she had an upcoming Palace booking, just for old times sake. He did as she requested, and she had her chauffeur drive her to the theatre just so she could see them there once more. Two days later she was dead of cancer at age 50.

Postscript: thanks to loving fans, Nora Bayes’s previously unmarked grave finally got a headstone in 2018, 90 years after her death. Read about that here.

To find out more about Nora Bayes and the history of vaudeville, consult No Applause, Just Throw Money: The Book That Made Vaudeville Famous, available at Amazon, Barnes and Noble, and wherever nutty books are sold.