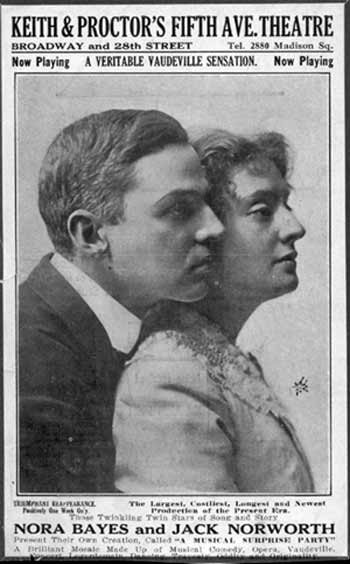 The vaudeville stage was that rarest of social organizations: a matriarchy. The singing comedienne stood at the top of the pecking order, and Jack Norworth was involved with three of them: Nora Bayes, Louise Dresser and Trixie Friganza (the first two were full-fledged marriages. My friend Dale Davidson, who may just be the foremost Norworth scholar, is not at all convinced that the affair with Friganza took place, though Dresser cited it in her divorce papers. Dresser and Norworth were married from 1899 to 1908). Norworth’s association with Bayes is the most famous of the three nowadays. They were a couple both on and off the stage from 1908 to 1913, and are credited with co-writing the song “Shine On, Harvest Moon”, which they first performed together in the Ziegfeld Follies of 1908. For more dope on their relationship, go here. ) Among the thousand or so other Tin Pan Alley songs Norworth is said to have co-written, the most famous by far is “Take Me Out to the Ball Game”, for which he provided the lyrics.

Born today in 1879, Norworth (John Knauff) got his start putting on theatricals in the U.S. Navy. Upon his discharge, he performed a short while in minstrelsy ** before bumping up to vaudeville. In his salad days of the late aughts and teens, he divided his time between big time vaud and Broadway revues. From the 20s through the 40s, he appears in a very few Broadway shows and Hollywood films. He continued to perform in vaudeville while it lasted, but it seems like his songs got a lot farther in the legit world than he did (his tunes are in dozens of shows and movies, down to the present day). Norworth passed away in 1959.