F.F. Proctor: From Acrobat to Emperor (of a Vaudeville Chain)

One of the most successful of all acrobats, F. F. Proctor made his mark by saving the money he made performing tricks in order to buy up the theatre where he performed. Then he bought a lot of other theatres, and became a millionaire. You should try it sometime.

Proctor’s story is instructive because he came into the business so early in its history. Born in Maine in 1851, he began his physical training almost from the cradle for the simple reason that his physician father had installed a gymnasium in the basement. The exercise couldn’t have helped his father that much—he died when Proctor was nine. His mother brought him back to live on the family farm in Lexington, Massachusetts where she had grown up, and when Proctor was old enough he moved to Boston. While working by day in a millinery, he joined the exclusive Tremont Gymnasium in his off hours. There he not only worked out to build his muscles, but also practiced juggling, trapeze, and similar arts.

A man whose name has been lost to history spotted his talent, and the two men formed The Levantine Brothers. At one of their first engagements, at the Theatre Comique, they did nine shows a day. A major theatre manager named M.B. Leavitt caught the act and liked it, but only liked Proctor, breaking up the act. Proctor hired as his new Levantine Brother George E. Mansfield. The team traveled with L.B. Lent’s circus for over 5 years. Proctor was one of the first stage performers to enhance his act by putting a mirror inlay on props (such as barrels and boxes) which created dazzling reflections. In 1872, Mansfield and Proctor to split to do their own separate European tours. Proctor performed there for three years. In 1876, he returned with a partner named Dan Bushnell. He saved all his money from these engagements, and in 1880, he purchased the Green Street Theatre in Albany, renaming it “Levantine’s” He then built the chain which brought him much greater and longer-lasting fame than his successful run as an acrobat.

He passed away in 1929, just as vaudeville was passing from the scene. I visited his palatial mausoleum at Woodlawn Cemetery in 2015: 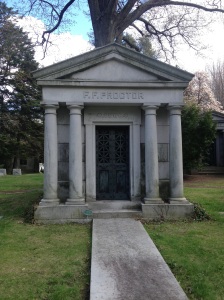 You can read much more about F.F. Proctor and his vaudeville circuit in No Applause, Just Throw Money: The Book That Made Vaudeville Famous, available at Amazon, Barnes and Noble, and wherever nutty books are sold.