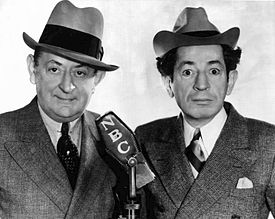 WILLY: We were born in Russia.

WILLY: All of us!

REPORTER: Were your parents Russian?

WILLY: No, they took their time.

REPORTER: Do you have any brothers and sisters?

WILLY: Yes, we have one brother, who’s deaf and dumb and he stutters.

REPORTER: Deaf and dumb, but he stutters?

Willie and Eugene Howard were among the first openly Jewish entertainers to tread the American stage. Not only were they Jewish but they played Jews, which was a peculiarly vaudevillian concept. Just as real Irishmen (like Eddie Foy, Harrigan and Hart, and Maggie Cline) played stage Irishmen, and real Blacks (like Williams and Walker, Mantan Moreland and Pigmeat Markham ) played stage Blacks, Willie and Eugene played caricatures of Jewish people. 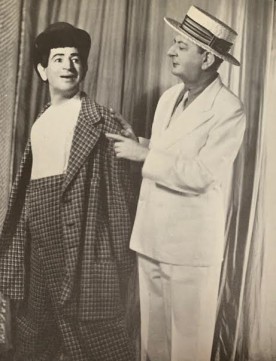 In their field, they were tops. George Jessel said “Willie Howard was the best of all the revue comics, bar none”. In 1929,  Variety called Eugene “a flawless straightman”.

EUGENE: Why, I’ve had my nose to the grindstone fifteen years.

WILLY: (regarding his nose) You should have seen it before he started.

Actually surnamed Levkowitz, the boys were born in Neustadt, Silesia, Eugene in 1880, Willie in 1883. The family immigrated to Harlem. The early part of their story parallels that of the Jolson brothers. The father was a cantor who taught his boys to sing in hopes that they would serve God. Instead, they ran off and joined the theatre.

Willie and Eugene both began their careers in 1897, but independently of one another. Eugene’s first job was in the chorus of a show called The Belle of New York at the Casino Theatre. Willie was hired to sing from the balcony at Proctor’s 125th Street, a common stage trick in those days.  It was also how Al Jolson got his start. Ziegfeld hired Willie to do this bit for his show The Little Duchess but his voice started to change, and so he was let go. 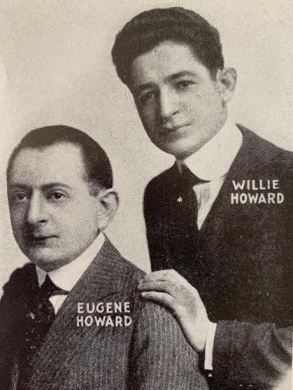 Willie and Eugene teamed up for the first time in 1902 with a sketch they called “The Messenger and the Thespian”.  The boys did dialect humor, opera parodies and comedy crosstalk. Willy was an an expert at foreign accents, and though he usually did Yiddish, there were times when he would also do Spanish or Scottish or any number of others. The situation usually featured Willie as some sort of troublesome servant (frequently a waiter or a bellhop), and Eugene as an authority figure (a customer or manager of some kind). Willy could also do killer impressions of top vocalists of the day such as George Jessel, Al Jolson, Gallagher & Shean, and Eddie Cantor. the visual effect was enhanced by the fact that Willie stood less than five feet tall, weighed 95 lbs., and had caved in shoulders, wild eyes and “professor” hair. Signature bits included “French Taught in a Hurry” in which did rapid doubletalk; “Quartets from Rigoletto”, which he would perform with large, buxom ladies (stealing glances at at their breasts the whole time); and “Comes the Revolution”, in which he would play a radical agitator. 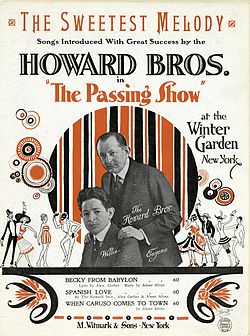 Willie and Eugene worked strictly in vaudeville for the next ten years, and then in 1912, began to intersperse their vaudeville bookings with numerous turns in major Broadway revues like the Shuberts‘ Passing Show series and George White’s Scandals. The last of these was Ballyhoo of 1932.

Eugene retired in 1940 to manage Willy, who performed in several more Broadway shows and in night clubs before passing away in 1949. Eugene joined him on the other side in 1965.

To find out more about the history of vaudeville and vaudeville comedians like Willie and Eugene Howard, consult No Applause, Just Throw Money: The Book That Made Vaudeville Famous, available at Amazon, Barnes and Noble, and wherever nutty books are sold.