On the Early Solo Stage and Screen Career of Stan Laurel

Stan Laurel is many ways the anti-Chaplin. There is much speculation as to why, given their common background in the Fred Karno troup, there wasn’t more contact between the two former colleagues during their Hollywood years.  There was almost none. During a period of some forty years in the States after the Karno troop had disbanded, Chaplin and Laurel are known to have been together exactly twice.

Author Fred Laurence Guiles speculates that Chaplin was insecure; that his fragile ego couldn’t stand the competition. However, this author’s humble theory is rather the opposite. Laurel was in no sense Chaplin’s equal. He’d been his understudy with the  Karno troupe. When the tour disintegrated, he made his living for awhile as a Chaplin imitator (one of countless, but adding a legitimate grievance to the disdain Chaplin may have felt.)  While Chaplin “found himself” almost instantly at Keystone, floundering only for a few weeks, it took Laurel 11 or 12 years to discover his character — and then only with a partner as a catalyst. While recent effort has been made to elevate Laurel to the status of the great comic directors, in reality he was never any more than a comic journeyman. To his dying day, he had nothing but defensive scorn for those who tried to “say something”, insisting that he just wanted to make people laugh. Of course he did — some of the shorts he did with Oliver Hardy are the funniest movies ever made. But there is nothing in the team’s canon to equal the ambitions of Chaplin, Keaton, Lloyd, Langdon, the Marx Bros, or W.C. Fields as films. Laurel and Hardy gave us pratfalls without pretension.

Chaplin’s scorn may also have had to do with another form of snobbery. Coming from the gutter himself, and now one of the richest men in the world, he associated with the likes of William Randolph Hearst, George Bernard Shaw, Igor Stravinsky, etc. etc. Laurel, as successful as he was, lacked not only intellectual precociousness but money smarts. At a time when the other great comics’ earnings were in the millions, his were in the thousands — and the bulk of that going to ex-wives. To be so much richer than Laurel might have been embarrassing to Chaplin. Laurel was not in his “class,” in that way.

And as we say, in contrast with nearly every other major comic figure to come out of vaudeville (Chaplin, Fields, the Marxes, Fred Allen, Bert Williams), Laurel exhibited next to no intellectual pretensions, inclinations or abilities. He lived breathed, ate, and slept gags. Hearing him speak in interviews is a bit shocking. The fact of the matter is, he was like many ballet dancers, opera singers and classical actors – a practitioner of a complex “high” art who shocks you by being a surprisingly earthbound person. In reality, a philosophical nature and book smarts can be a hindrance to a performing artist. While Fred Allen and Groucho Marx were without peer in the delivery of lines, neither could act his way out of a paper bag. Chaplin’s intellectuality eventually alienated him completely from his audience. Stan never tried to do more than connect with an audience and audiences were grateful. 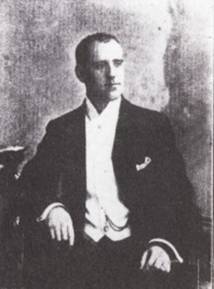 Born in Lancashire in 1890 (the year after Chaplin), Stan was the son of Arthur Jefferson, (a.k.a “Jeff” or A.J.”) a successful actor/manager and playwright. A.J. claimed to be from the same family that had produced Joseph Jefferson (America’s perennial stage Rip Van Winkle in the 19th century) and possibly even a certain American Jefferson who co-wrote the Declaration of Independence.

His parents were struggling during Stan’s early years, but success came to Jeff in 1896, touring the provinces with the melodramas that were so popular in that era. When Stan was 12, the family moved to Glasgow where his father managed the Metropole Theatre. 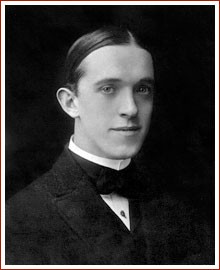 Stanley had always wanted to follow in his footsteps. A.J. built him his own miniature theatre in the attic when he was nine. When Stan was at boarding school, one of his teachers would wake him up after all the kids were asleep and have him entertain the faculty. Stanley Jefferson was a terrible student but that was overlooked on account of his talent. One day, when he was in his teens, he snuck off to a music hall run by a friend of A.J.’s and quietly, anxiously made his theatrical debut. A.J. approved. He got Stan a job with Levy and Cardwell’s Juvenile Pantomimes, with whom the boy performed for two years.

In 1910, Stan was discovered by Karno. By this time, Chaplin was already the company’s principle comedian. Laurel was made second comedian and Chaplin’s understudy. The two were room mates during the company’s first U.S. tour in 1910. Were they friends? Did they talk? What did they talk about? The world will never know. 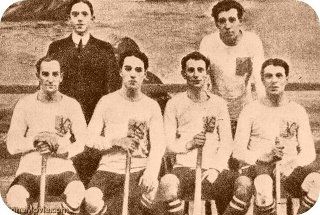 Upon the troupe’s return to England, Stan left to tour music hall with his own sketches. He was  on the brink of starvation when Karno manager Alf Reeves offered him a slot in the 1912 U.S tour. The troop was an even bigger hit this time around, word of mouth and memory serving to amplify audience expectations.  When Chaplin left the company to make films, Karno lost all of the upcoming bookings. The act disbanded in 1913.

Some went back home to England, but Stanley Jefferson elected to stay in the land of opportunity. He teamed up with two other Karno alum, Edgar and Wren Hurley as “the Three Comiques”. Stanley wrote a sketch for them called  “the Nutty Burglars” that played Chicago and environs for several months. On the advice of booking agent Gordon Bostock, the troupe then began to call themselves the Keystone Trio. Stan started to do his character as Charlie Chaplin, and the Hurleys began to do their parts as silent comedians Chester Conklin and Mabel Normand. I guess this was in the days before lawsuits. Anyway, the deception made the act highly bookable, and the team worked the Poli Circuit for many months, finally breaking up over “creative differences”. (“I want to throw the pie!”, “No! I want to throw the pie!”)

In 1915, he teamed with Alice and Baldwin “Baldie” Cooke to form the “the Stan Jefferson Trio”. This knockabout team followed very much the same formula as the Keystones (without the silent film star rip-off) with a sketch called “the Crazy Cracksman” they worked the Proctor, Fox, and Pantages circuits for two years.

In 1917, Stan met (and fell for) a woman named Mae Dahlberg, an Australian woman who was part of a dancing sister act. Stan dumped the Cookes and teamed up with Mae, making her both his comedy partner and common-law wife. The fact that she had an actual husband down under stopped her from becoming the legal Mrs. Jefferson). It was Mae who gave Stan the surname the public came to know him by. With the high degree of superstition so common to stage folk, Stanley realized one day that “Jefferson” has 13 letters. Of course, that numerological handicap never hindered Joseph or Thomas J., but we’ll let that pass. As the two were casting about for names one day, Mae cracked open a history book and saw a picture of Scipio Africanus wearing the traditional laurel wreath of a victorious Roman general. And, so, that’s why we call him Stan Africanus. No, no, just kidding.

Stan and Mae struggled together in vaudeville and films for ten years. George Burns spoke highly of their two-act in later years. He recalled that Stan played Mae’s mother, cried a lot, and got pushed around a lot by Mae, who was a sort of matronly Margaret Dumont type.

Unfortunately their relationship was very like that in real life, too. Stan and Mae fought backstage constantly. Not only was Stan hen-pecked (shades of the characters he was to play) but there is evidence that he was abused.  He would emerge from many an overheard, overheated dressing room conversation with black and blue marks and scratches. “Do you know that cat I have-?” he began to explain to one friend. “You mean Mae?” was the too obvious rejoinder.

In 1917, the team was booked at the Hippodrome in Los Angeles. A producer caught the act and, impressed by what he saw, made a sort of demo film with Stan called Nuts in May. The film previewed at the Hippodrome, where it was seen by both Carl Laemmle (the head of Universal Pictures) and Chaplin, who had been a star for three years by that point. Both expressed an interest in signing Stan, but only Laemmle acted on it. In 1917, Stan launched the “Hickory Hiram” series of silent comedies around the eponymous rural character. The films tanked,  proving the adage most succinctly expressed in Abel Green’s most famous variety headline: “Hix Nix Stix Pix”. Will Rogers also learned this the hard way. Jazz age movie audiences did not go in for bumpkin characters.  (tastes changed dramatically during the depression, however when Rogers, Chic Sale, and “Ma and Pa Kettle” would click big time with hick shtick. By that time, though, Laurel had long since moved on, to the character we all know him as).

It took years for Stan to catch fire in pictures. All throughout this period, he continued to play in vaudeville with Mae well into 1920s. Unlike Chaplin, who was always well focused on the next move, Laurel seemed directionless, ambitionless, helpless. He never got to the next step without being prodded by others. From 1918-25, he was in and out of silent pictures, making films at various times for Hal Roach, Broncho Billy Anderson and Vitagraph. For most of 1920 and 21 the bulk of his work was in vaudeville with Mae. 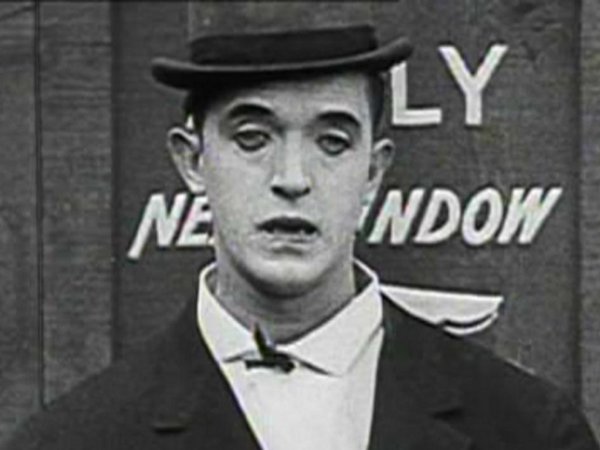 But Mae was holding him back. He insisted (no doubt with pressure from her) that she be in his every picture, and audiences didn’t like her. This situation came to a head in 1925, when Joe Rock of the team of Rock and Montgomery was ready to back Laurel for a series of silent shorts, only without Mae.  When she balked, Rock held firm, finally offering her a most unusual and humiliating deal. He would give her several thousand dollars, along with some jewels she later pawned, if she would go back to Australia. When Stan showed no inclination to demur, she accepted the offer, which was ironclad. The ship’s purser had strict instructions: Mae would not receive her payment until the ship was a day out at sea. Stan was finally free. 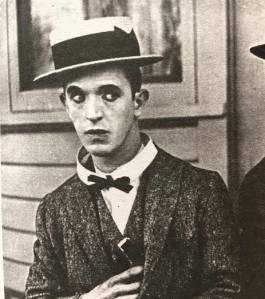 In 1926, he accepted an offer from Roach (producer of Harold Lloyd, “Our Gang”, Charley Chase, and many others) to direct and write shorts. He seemed quite content to be behind the camera, but one day an accident got him acting again. One of the Roach players named Oliver Hardy had scalded himself with gravy and Stan had to substitute for him.

It was director Leo McCarey who teamed Laurel and Hardy in the 1927 vehicle Putting Pants on Philip. And this magical teaming is the subject of this post.

To find out more about Stan Laurel and the history of vaudeville, consult No Applause, Just Throw Money: The Book That Made Vaudeville Famous, available at Amazon, Barnes and Noble, and wherever nutty books are sold. To learn more about Stan Laurel and silent and slapstick comedy please out my new book: Chain of Fools: Silent Comedy and Its Legacies from Nickelodeons to Youtube, just released by Bear Manor Media, also available from amazon.com etc etc etc