Harold Lloyd (1893-1971) is often called “the Third Genius of Silent Comedy”, famous for his bespectacled, upbeat “Boy in Glasses” character and for his “Thrill Comedies”, wherein he would work the nerves of his audiences to a frazzle while he cavorted on the outside of skyscrapers. Lloyd was often Hollywood’s top comedian during the 1920s, and managed to keep his comedy career coasting well into the talking era.

Lloyd did not initially start out to become a comedian, but an actor. After a few years doing theatre with amateur and stock companies, he broke into pictures as an extra before teaming up with Hal Roach in 1915 to make original comedies of their own (with a brief period of defection during which he worked for Mack Sennett). Lloyd eventually became one of the funniest men in silents (indeed, the movies of his maturity make me laugh more frequently and harder than the more cerebral Chaplin or Keaton. The latter two of course have pathos, beauty and awe to their additional credit, however, and those are their own rewards). Chaplin and Keaton were pathbreaking, but in a very real sense, Lloyd was much more influential. It’s easy to tie him to just about any contemporary comedy star; much harder to do that with the other two and most of their contemporaries, the majority of whom were vaudeville clowns.

Lloyd took two years of research and development to arrive at  his famous go-getting “glasses”persona (discarding two previous characters, Willie Work and  Lonesome Luke, along the way), and then employing a company of gag-writers and other cinema professionals to make his machine hum, anticipating the Hollywood studio system in ways that both Chaplin and Keaton took great pains to avoid. Most of his early shorts feature him in a sort of team with Snub Pollard and leading lady Bebe Daniels, later a star of talkies. Like most silent comedians, Harold Lloyd did his own stunts. In 1919, he sacrificed more then most for his art, when a prop bomb blew up, taking off a portion of his hand.

After scores and scores of popular comedy shorts , Lloyd moved up to feature length films in 1922 with Grandma’s Boy and proceeded to star in another 14 terrific features (with only a couple of clinkers) over the next 16 years (I include his talkies among the tally, because for the most part I consider them as good, or nearly so, as his silents).

Lloyd’s best known pictures are Safety Last (1923) with its iconic shot of Harold hanging precariously from a giant clock; and The Freshman (1925) in which Harold wins the big college football game. 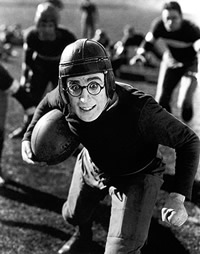 His biggest grossing film ever was his first talkie Welcome Danger (1929) — audiences were eager to hear Lloyd speak. During the 30s he made films with less frequency (one every two years as compared to two films per year during the silent period). He began to age out of his character, and his sensibility clashed with those of the Depression Era audience. Each succeeding picture did less well than its’ predecessor. After The Milky Way (1936), he shut the doors of his independent production company for good. He starred in one more picture for Paramount as a contract player (Professor Beware, 1938), and then retired from acting in films at the young age of 45.

But he continued to work. He produced two films for RKO: A Girl, A Guy and a Gob (1941), and My Favorite Spy (1943). He suffered a major set-back when his personal film archives, containing copies of most of films over the entirety of his career, were destroyed in a fire in 1943. In 1944 he tried his hand at radio, as the director and host of The Old Gold Comedy Theatre on NBC. The show lasted a year. In 1945 Preston Sturges coaxed Lloyd back to the big screen to star in his sequel to The Freshman, the under-rated and too-little-known The Sin of Harold Diddlebock, which was released in 1947, (and renamed Mad Wednesday for its re-release in 1950).

During the 1950s and 60s, Lloyd engaged in a project that was seemingly out of character but nonetheless true: he experimented with 3-D color photography, taking hundreds of pictures of nude, topless and swimsuited female models, many of whom would later become well known, such as Marilyn Monroe, Bettie Page, Tura Satana and Dixie Evans. Some of these were published in men’s magazines; some were later compiled in a book Harold Lloyd’s Hollywood Nudes in 3D. I received it once for a Christmas gift, and I must say it filled me with me uneasiness. There is something about the clash between Lloyd’s clean-cut image, not just before the cameras but off camera, as this upstanding, square Shriner…and this later work as a cheesecake photographer that flips me out. It’s like, I don’t want to know about grandpa’s sex thoughts, ya know? Somehow I could have taken it from Chaplin, who was widely known to be oversexed since the second Wilson administration. To have the Nebraska-bred Lloyd throw off his straw boater and emerge as this leering old codger taking snapshots of ambitious, nubile young starlets cavorting around the swimming pool…well that’s so L.A, it’s practically carcinogenic. 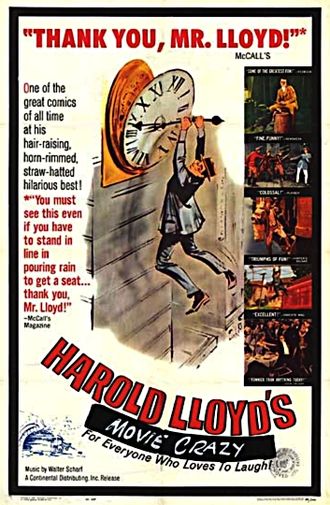 In the early 1960s he supervised and produced the compilation films Harold Lloyd’s World of Comedy (1962) and Funny Side of Life (1963) which were the sole avenues many of us had to Lloyd’s early work for many years. While he was alive, Lloyd didn’t allow his films to be shown on television and rarely allowed them to be screened in theatres. Lloyd passed away in 1971. Thus though by many measures he was the most popular American screen comedian of the 1920s, his public profile still lags behind that of Chaplin, whose films never went out of circulation, and Keaton, whose revival began in the 1960s.

I personally didn’t see most of Harold Lloyd’s silent features in their entirety until New York’s Film Forum had a huge restrospective in 1993.  I practically lived there for several days! Today of course most of his films are widely available and I’ve seen all of them many times over, and have blogged about them in the Harold Lloyd section of Travalanche. And there’s much MUCH more in my book: Chain of Fools: Silent Comedy and Its Legacies from Nickelodeons to Youtube, released by Bear Manor Media, also available from amazon.com etc etc etc. The sections about Lloyd in Chain of Fools are much more detailed and insightful than any thing I’ve written about him on this blog, so please buy it! I’d be crazy to give it away for free!