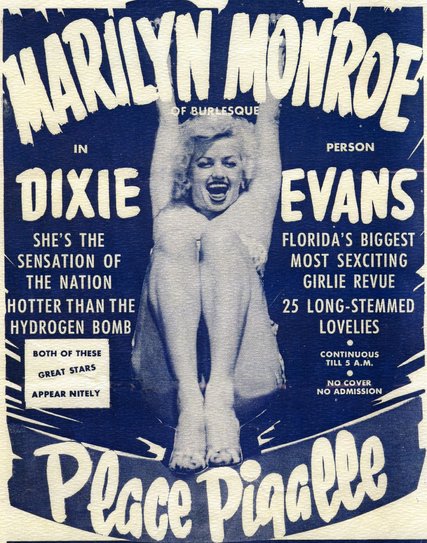 August 28 was the birthday of the late Dixie Evans (Mary Lee Evans, 1926-2013). Originally from Long Beach California, Evans was already successful as a model, chorus girl, and burlesque star in the early 1950s when Harold Minsky saw her “Hollywood Casting Couch” number and suggested she adopt a Marilyn Monroe persona. She worked this gimmick for about a decade until Monroe passed away. At this point her act became a tribute to the departed actress for a time, and then she developed a fresh act based on the film Irma La Douce. In 1963 she married boxer Harry Braelow, a marriage that lasted two years. 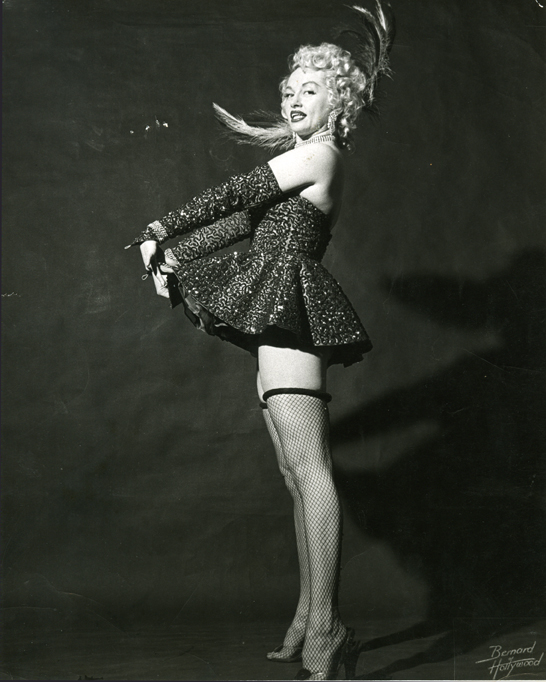 Evans retired from burlesque dancing in the early 1970s, but continued to work booking and organizing resort entertainment on the island of Bimini. In the late 1980s she began modeling again, and in the early ’90s became heavily involved with the organization now known as the Burlesque Hall of Fame, taking over its leadership when her friend, founder Jennie Lee died in 1990. The following year, Evans founded the Miss Exotic World Pageant.  She became a mentor to many of those working in the Neo-Burlesque movement.

I had the honor of speaking with her on the phone a couple of times before she died, in the context of a podcast we both did together (The Halli Casser-Jayne Show — play it here. It’s worth playing, you’ll get many more details about her fascinating life than I was able to include here. Plus you can hear me and Angie Pontani!).

Dixie Evans was truly the Godmother of a thousand burlesque dancers. Raise a glass of champagne to her today. If that’s not convenient, just mime it, timed to a recording of “The Stripper”!