On the Amazonian Glory of Tura Satana

It may seem impossible that such a perfect creature was born on planet earth, but it’s true: Tura Satana (Tura Luna Pascual Yamaguchi) came into the world on July 10, 1938. She was born in Japan, to a Filipino-Japanese father who’d been a silent movie actor, and a Cherokee-Scots-Irish mother who’d been a circus performer. The family moved to the U.S. only to be interned in a prison camp at the start of World War Two.

Her teenage years were predictably wild. She led an all-girl gang, went to reform school, worked as a stripper and burlesque dancer, and married at age 17, a liaison that only lasted a few months but gave her an excellent new last name: Satana. Satana happens to be a real surname, but the fact that it so closely resembles “Satan”, and goes so well with “Tura” makes the whole thing seem orchestrated by a cosmic puppet-master. She had moved to L.A. during her teenage years; this was the period when she posed for Harold Lloyd’s 3-D photo sessions with Hollywood nudes.

She became in demand as an exotic dancer for a number of years at nightclubs around the country, and is said to have become romantically involved with Elvis, undoubtedly one of the few men who could handle her.

In 1963, she was cast as the prostitute Suzette Wong in the movies Irma la Douce. Often she was cast as dancers or stippers in cabaret scenes in movies and television. Her turn in Who’s Been Sleeping in My Bed? (1963) made the movie poster:

In 1965, she got the role of a lifetime, when Russ Meyer cast her as Varla in his great camp exploitation masterwork Faster, Pussycat! Kill! Kill! 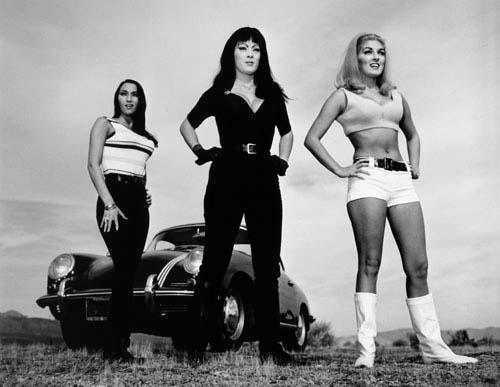 Inevitably, I think that Satana WAS Varla, we picture her in full Varla costume whenever we think of her. The film made full use of her martial arts abilities, statuesque yet buxom form, and wisecracking ad libs. She also got to race a cool hot rod in the desert and kick a lot of people’s asses, including, most satisfyingly, those of men.

Unfortunately this cult tour de force didn’t lead to big budget Hollywood stardom. She went back to playing a stripper in Our Man Flint (1966). In 1968, she returned to what seemed to work best for her — a bigger part in a smaller movies. In Ted V. Mikels The Astro Zombies (1968), she plays a Dragon Lady character she named after herself and got to share the screen with John Carradine and Wendell Corey, in a movie that was co-written and co-produced by Wayne Rogers! 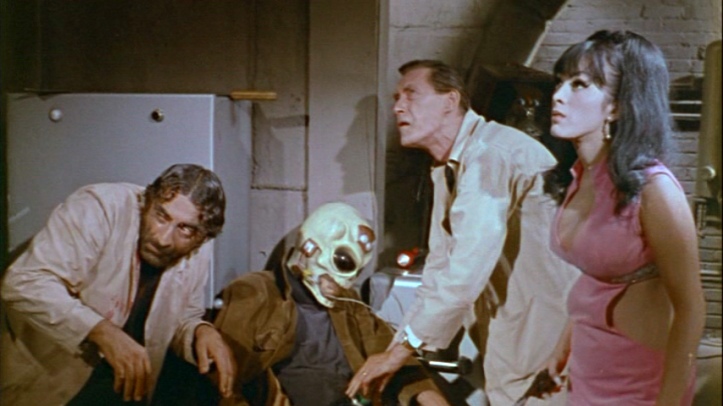 Mikels hired her again for The Doll Squad (1973), about a quintet of agents set to foil a madman who wants to take over the world. It was the last film of the first phase of her career.

After this, she suffered a number of setbacks. She was actually shot by a former lover. She broke her back in a car accident. She gained weight and took a succession of jobs outside of show business. In the intervening time of course the fame of her early work grew and her movies became cult favorites. In 1985 a glam metal band emerged calling themselves Faster Pussycat. She became in demand at live fan events. Starting around 2002, she began to make appearances in films again, and acted in a few low budget movies (two of them were “sequels” to Astro Zombies). By now, her appeal had altered. An older, heavier woman, but one who simultaneously carried a legend with her, her appeal was more John Waters than Russ Meyer, but she enjoyed the renewed attention. Tura Santana passed away in 2011.

There is a campaign under way to make a documentary about Tura Satana; read about it here.