Trav S.D.’s Guide to the “Ma and Pa Kettle” Films

This being the birthday of the great Marjorie Main, we thought we’d take the opportunity to publish a little guide to the comedy film series she starred in with Percy Kilbride, Ma and Pa Kettle. This is that interesting period in Hollywood (mostly the 1940s) when television had yet to conquer the American living room and yet (thanks to radio) the tv sit-com was desperately striving to be born. I’ll be blogging more about this period in future — there were many such B movie comedy series at the time.

The premise is that the Kettles are a poor but hilarious hillbilly couple with too many children to count (it’s essentially an elaboration on “The Little Old Woman Who Lives in a Shoe.” Both Kilbride and Main were essentially playing types they often played in other films. Kilbride’s “Pa” was lazy, slow moving, and droll. Ma was hard-working, and always fussing and yelling. Like the later Beverly Hillbillies a lot of humor is derived from culture clash: the Kettles will luck into some money or some other good fortune and suddenly be thrust up against the modern world.

A strange quirk of the series is that it is off-type in one way. Instead of being set in the traditional hillbilly country of the Smokies or the Ozarks, it takes place in Washington State. This was the setting of the original novel on which the series was based The Egg and I (1945) by Betty MacDonald.

The Kettles are not the stars of The Egg and I, but they stole the show and that’s how they got their own spin-off series. The Egg and I is one of those tedious “darnedest house ever” comedies, where a couple of city folk (Fred MacMurray and Claudette Colbert) decide to try their hand at chicken farming. How do you think it works out? The hilarious Kettles are their neighbors.

As he had in The Egg and I, Richard Long plays the Kettle’s fancy son who went off to college. He also meets and falls in love with a lady reporter – she becomes his wife in the series. Much class-based conflict, an important anchor for both the comedy and the drama. Pa Kettle wins a contest by devising an advertising slogan for a brand of tobacco. The prize is a fancy new house . Culture clash! Tv interviews! Meddlesome town women conspire to unseat Pa by saying he stole the idea for the slogan. It all comes crashing down. Then Pa wins another house in another contest.

For some reason, though it is set in contemporary America, the series features “How, Ugh” Indians, which is not just politically incorrect but factually incorrect. And there is a funny running gag where Pa makes the radio work by tapping the floor with his rocking chair.

The Kettles are still ensconced in a fancy, modern new house.  They win a trip to New York.   A gangster gets a flat tire and stays at their place and volunteers to babysit so he can hide out (then the kids make life hell for the gangster). Meanwhile Ma and Pa Kettle take their trip to the Big Apple unwittingly carrying the gangster’s loot. Jim Backus is in it as a crook. The suitcase with the loot is accidentally taken by a millionaire, so the Kettles keep buying replacements, which in turn keep getting stolen. Later they attend a fancy party at the millionaire’s home. Pa leads a square dance. The son (Long) and his wife live in New York and are part of the plot. A subplot concerns Long’ss efforts to raise money for a chick incubator he has invented.

In this one , the son (Long) and his wife come back to stay with the Kettles because she is going to have a baby. (There is a funny bit where, through a misunderstanding Pa thinks Ma is the one who has had the baby). The rich in-laws show up. The wife puts on airs, and chases the family out – they go back to the farm and leave their modern house to the in-laws.  The father in law (Ray Collins) is down to earth however. A former mining engineer, he discovers that there is uranium on the Kettle property. Some schemers briefly swindle them out of the property but then it turns out there’s no uranium ore…it’s just radioactive dust on the son’s old army uniform from atomic tests! Meanwhile the couple breaks up. First their friend Billy Reed the peddler tries to steal the baby, but he steals the wrong one Then the daughter and her mother head back east—but the kettles head them off in a big chase sequence and they reconcile. 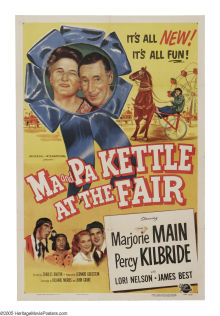 Ma and Pa Kettle go to the county fair, where they try to win contests to put their daughter through college. That’s it! 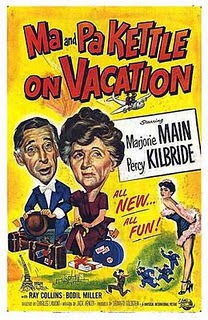 This one mixes elements of Ma and Pa Kettle Go to Town and Ma and Pa Kettle Back on the Farm. Their millionaire in-laws take them on a trip to Gay Paree. Meanwhile they are carrying a secret envelope that some spies want!

The Kettle’s young son wins an essay contest describing life on the farm. Unfortunately the picture it paints is dishonest. So they must go back to their farm and pretend it is as idyllic and efficient as his description, as the contest judge, a publisher (Alan Mowbray) is coming west to see for himself. Very sit commy. Lots of slapstick business with a stand-in for Main, and undercranking. The publisher is an irritable hypochondriac. Everything goes wrong. Pa has jerry-rigged the whole place. Everything falls apart. Their most mischievous kid (Richard Eyer—a child star, recognizable from many movies of the time) plays practical jokes. The inevitable Mary Wickes plays the local librarian.

This was Percy Kilbride’s last performance as Pa Kettle and perhaps you can see why. He hated being typecast as rural characters to begin with. And with this one, the franchise has perhaps jumped the shark, stretched even farther than they were originally stretching for the sake of novelty. The Kettles go to Hawaii to help relatives with their pineapple ranch. It’s funny, because, well, look at that poster. But think how great it would hgave been if Elvis Presley had joined them in the cast.

Kudoes to them for keeping the franchise going without Kilbride! I would have thought it unthinkable! At any rate, in this one the Kettles go to help Pa’s brother (Arthur Hunnicutt) with his Ozarks farm (haven’t they belonged in the Ozarks all along?) While there, they get mixed up with moonshiners! Una Merkel is in the cast.

The last in the franchise. Believe it or not it was one of the top grossing films of 1957! Here they return to the original set-up, with Parker Fennelly playing Pa. I’ve not yet seen this one, but the plot is one of the most depressing things I’ve ever heard: “Ma and Pa help out Brad Johnson to turn his girlfriend Sally into a good farm wife”. Why don’t you just take that double barreled shotgun and shoot me, Kettles?

The presence of Claude Akins in the cast is to me a kind of clue about why the series ended here. We are getting awfully close to modern times. As I said above, Elvis Presley was a movie star by now. This was a hoary brand of comedy to begin (though I happen to love it) but now they were repeating themselves. But that wouldn’t stop The Beverly Hillbillies from being a monster hit on television just a few years later.