On Vaudeville and English Music Hall 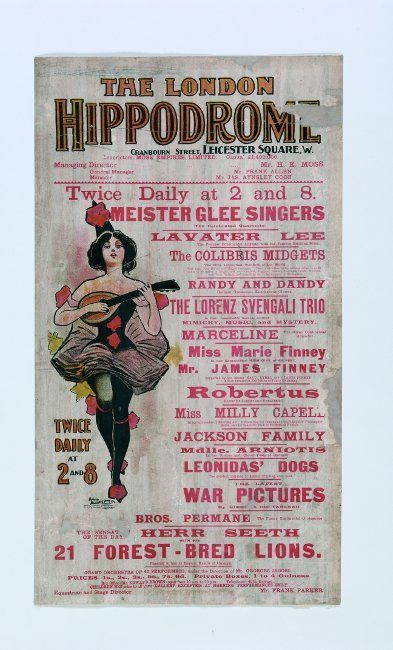 English music hall started out in British taverns at roughly the same time as the American concert saloon in the 1850s. Towards the end of the century large theatres were being built especially for the purposes of variety entertainments and at that point the music hall bore more of a resemblance to American vaudeville. Interestingly, music hall lasted a bit longer than its American cousin, until the early 1960s when, it is speculated, television and rock and roll is what put it out of business (as opposed to cinema and radio, which is is what had finished vaudeville off in the U.S. thirty years earlier).

As the name implies, the core and most distinctive part of English music hall is song. An instantly recognizable kind of tune evolved in music hall, often written in a cheeky, working class voice — sometimes broadly comical, sometimes sentimental and sad, and occasionally a little risque. Often booklets were passed out so that the audience could sing along. The proceedings were led by a so-called “Chairman”, the rough equivalent of our emcee. Music hall comedy, too, was of a certain type, stylistically allied with the song. Variety acts of the sort we associate with vaudeville rounded out the bill.  Because of the shared language and the convenience of new-fangled steamship travel, it was common for British and American acts to play in each other’s countries. Many American acts were big in Britain; and many Brits popular in the states. For profiles of the most important English music hall acts who played in American vaudeville go here.

To learn more about the variety arts past and present, including vaudeville and English music hall, consult No Applause, Just Throw Money: The Book That Made Vaudeville Famous, available at Amazon, Barnes and Noble, and wherever nutty books are sold.