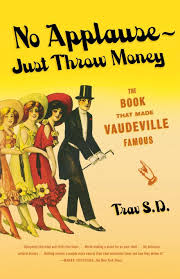 When Groucho Marx and Charlie Chaplin were born, variety entertainment had been going on for decades in America, and like Harry Houdini, Milton Berle, Mae West, and countless others, these performers got their start on the vaudeville stage. From 1881 to 1932, vaudeville, (a nationwide system of theatre circuits specializing in variety entertainment) was at the heart of show business in the United States. Its stars were America’s first stars in the modern sense, and it utterly dominated American popular culture. Writer and modern-day vaudevillian Trav S.D. chronicles vaudeville’s far-reaching impact in No Applause–Just Throw Money. He explores the many ways in which vaudeville’s story is the story of show business in America and documents the rich history and cultural legacy of our country’s only purely indigenous theatrical form, including its influence on everything from USO shows to Ed Sullivan to The Muppet Show and The Gong Show. More than a quaint historical curiosity, vaudeville is thriving today, and Trav S.D. pulls back the curtain on the vibrant subculture that exists across the United States–a vast grassroots network of fire-eaters, human blockheads, burlesque performers, and bad comics intent on taking vaudeville into its second century.

Go here for a handy timeline of key benchmarks in vaudeville history.

To learn more about the vaudeville and the variety arts past and present, consult No Applause, Just Throw Money: The Book That Made Vaudeville Famous, available at Amazon, Barnes and Noble, and wherever nutty books are sold.