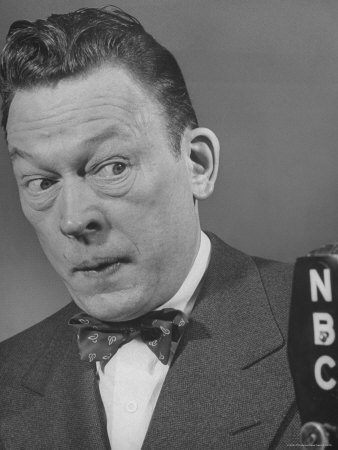 With his dour, doleful expression and his deadpan delivery it was perhaps inevitable that Fred Allen would make his greatest permanent mark in radio. On film, he strikes one as being aloof and uncommitted to the character he is playing. Before he went before either the camera or the microphone, however, he achieved what might have been thought impossible for an introverted, bookish, rather homely looking man – he conquered vaudeville. It is a testament to the audience, or to Allen – perhaps both – that this intelligent, subtle man became famous at all.

He was born John Florence Sullivan in Cambridge, Massachusetts on this day in 1894. His mother died when he was three years old. His father was an alcoholic bookbinder who normally left him in the care of an aunt. The elder Sullivan did teach the boy the trade of bookbinding, securing a position for him at the Boston Public Library at age 14. Unlike almost all other vaudevillians (and despite having to work hard at part-time jobs to earn his keep), young John Sullivan was an achiever at school. He attended the Boston High School of Commerce for Boys, where he got good grades, did athletics, and edited the school paper. This school gave him his first opportunity to perform, an assignment in salesmanship class to tell a humorous story. One can only imagine the chagrin of the teacher, who’d requested only a mild anecdote to put customers at ease, when he received the acid and flowery tour de force John Sullivan no doubt turned in. 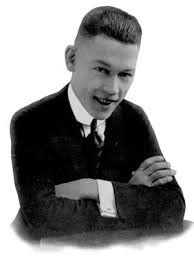 Strangely, juggling was Allen’s first love. He got a book on the subject, began practicing at odd hours and carefully studied the techniques of every juggler who came to town. After juggling in the library’s annual amateur talent show, he received so much encouragement that he resolved for once and for all to go into show business.

He started at the bottom rung, at an Boston Amateur Night run by a man named Sam Cohen. He was only 17 years old. He did so well that soon he was substituting for Cohen as Master of Ceremonies. Another opportunity arose when a a friend named Paul Huckle asked him to substitute for him at Keith’s National, in an evening supposedly presenting “professional talent new to Boston.” Performing as Fred St. James, he was a sensation, although the audience reportedly thought he was a parody of a vaudeville act. 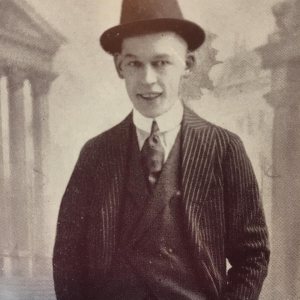 Realizing his is only a mediocre act in a field where superlatives are everything, he decided to bill himself as “The World’s Worst Juggler”, because he knew he would never be the best. A performer named Griff was influential. The man was a juggler, but comedy was the most important part of the act. Forthwith, Allen began to amass potential material for his comedy in notebooks, a procedure with which he worked until his dying day. He increased the amount of monologue in his act,and bookings immediately picked up. 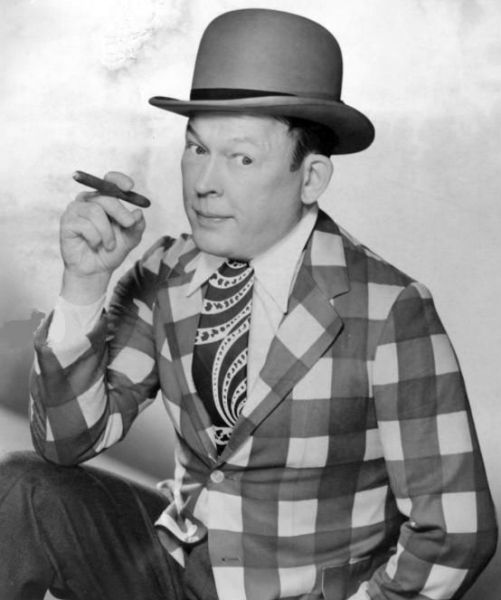 Moving to New York, he now billed himself as “Freddy James, the World’s Worst Juggler.” A three day booking at Keeney’s Brooklyn on his very first day was misleading. Weeks went by without subsequent employment. Just as he was making up his mind to go home, he got a three week booking on the Poli Circuit in New England.

Upon returning from the tour, “James” met a Loew’s booker named Mark Leddy who finally started him on his way. The act had evolved into a sort of parody of vaudeville. “James” would mock other acts, by doing bad ventriloquism, a bad song on banjo, and of course, bad juggling . It is readily apparent that such an act was light years ahead of its time. Such “ironic” entertainment doesn’t really become widespread in the U.S. until the late 1950s and even then it is considered subversive (Bob and Ray, Nichols and May, Lenny Bruce, even Mad Magazine). Not until the 1970s and 1980s would it become mainstream with Saturday Night Live, SCTV, and David Letterman’s various shows). There can be little doubt that for a long time, folks just didn’t “get” Fred Allen’s sense of humor, which accounts for his ten year crawl to the top. 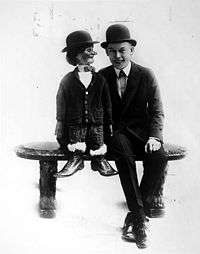 In 1914, he embarked on a tour of Australia. As W.C. Fields had done, he coped with the long months of loneliness by reading every book he could get his hands on. By 1917, his verbal faculties were so highly improved that they play an increasingly important part of his act. After breaking in a new act on the Pantages Circuit, he changed his name to Fred Allen so he could work the big time. (The catch 22 in those days was that the big time houses wouldn’t book any small time acts. You would have to invent yourself anew each time.)

The new act debuted at Proctor’s Fifth Avenue Theatre in 1918, but a single pan in Variety sent him tumbling back to small time. (Allen insisted it was because he refused to buy an ad). Over the next four years, Allen’s career would see-saw heartbreakingly between big time and small time.

By 1921, he was relying almost entirely on his skills as a monologist, however, and the act was getting stronger all the time. The juggling shtick was abandoned. A Keith booker caught this new act and installed him at the Colonial and the Alhambra – prestige dates. 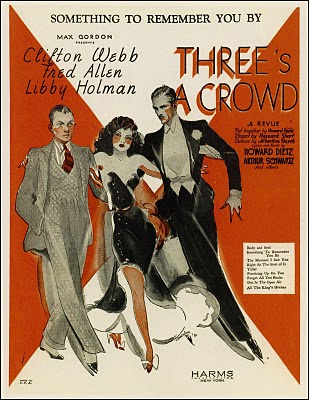 By the mid-twenties he had graduated to Broadway Revues: e.g., Snapshots of 1922, The  Passing Show of 1922, Frank Fay’s Fables, Vogues of 1924, Greenwich Village Follies (1924), The Little Show (1927) while continuing to headline in vaudeville. The Little Show, which co-starred Clifton Webb and Libby Holman, was a huge hit and helped make Allen a star. 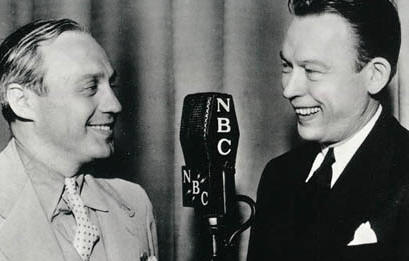 Early attempts at film in the 20s and early 30s revealed Allen’s limitations as a performer, but in radio, his verbal acuity found its perfect medium. Along with Jack Benny (with whom he created broadcasting’s first running “feud”) Allen became radio’s top comedian. His radio career spanned 17 years, with The Linit Bath Club Revue (1932), Town Hall Tonight (1934), and finally The Fred Allen Show (1939-50), as popular for its cast of regulars as it was for Allen himself. Among the most popular denizen’s of Allen’s Alley, were Titus Moody (a stereotyped Yankee) and Senator Claghorn (on whom Mel Blanc modeled  Foghorn Leghorn). The most astounding fact about Allen’s long-running series is that he wrote nearly every episode by himself – a feat surely unequaled in broadcasting history. Then, in 1949 the inevitable happened. The Fred Allen Show was famously clobbered in the ratings by a game show called Stop the Music. The disparity of the two shows, and the way Allen’s program was abruptly dropped is often used as a benchmark in the descent of American culture, a way station on the way to the sewer, as Gilligan’s Island, Jerry Springer and Jackass, each – for some – later marked low points. 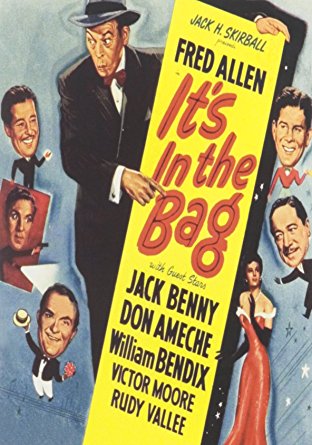 Though as we said Fred Allen’s appearances on the big screen are few they are especially prized by comedy buffs. He had starred in a couple of shorts when sound came in, and played some supporting parts in features, but the one proper, feature-length starring vehicle for Fred Allen was the 1945 comedy film It’s in the Bag. It’s too strange for ordinary humans but maintains a devoted cult among people like me.

Allen’s time on television was brief and undistinguished. It’s one thing to listen to a sour, gravelly-voiced, cynical pessimist say nasty but funny things week after week. It’s another to look at a puffy-eyed , pale-skinned, tobacco-chewing old man doing the same thing. Nevertheless, Allen did persevere for several years, first as a host of the Colgate Comedy Hour in 1950 (a chore he shared with Ed Wynn, Martin and Lewis, and Eddie Cantor on a rotating basis). He hosted Chesterfield Sound Off Time 1951-52, this time alternating with Bob Hope and Jerry Lester. His last gig was as a panelist on What’s My Line. He gave the world two great books Treadmill to Oblivion (1955, about his years in radio) and Much Ado About Me (1956, about his early years), before giving up the ghost of massive heart failure in 1956. 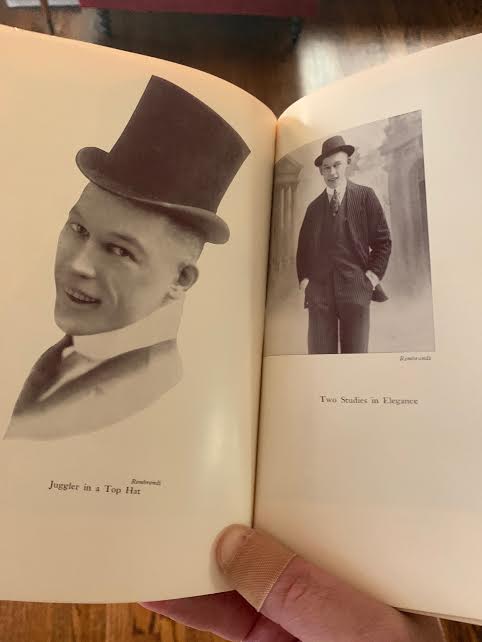 It’s sad and grim I know, but I still couldn’t resist laughing at this headline, because it sounds like one of Allen’s own lines: 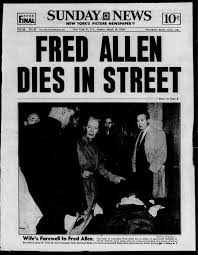 Now, there are plenty of tv clips of Fred Allen on youtube, but the whole point of Allen is radio, that’s the medium in which he was a genius. So we attach a clip of his radio show. As yesterday was Mel Blanc’s birthday, I thought it would be cool to listen to a clip of Allen with cast member Kenny Delmar in his character Senator Claghorn, which, as we said above, was the inspiration for Foghorn Leghorn:

To find out more about Fred Allen and the history of vaudeville, consult No Applause, Just Throw Money: The Book That Made Vaudeville Famous, available at Amazon, Barnes and Noble, and wherever nutty books are sold.