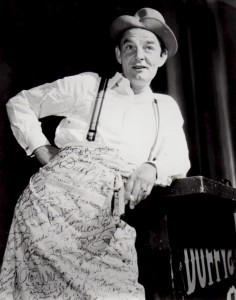 Your grandparents (or great-grandparents) might be dumbfounded to learn that a showbiz figure as major as Ed Gardner (Edward Poggenberg, 1901-1963) and a show as popular as Duffy’s Tavern (1941-1951) would have disappeared so thoroughly from the public’s consciousness a couple of generations hence. Gardner’s fate is not unlike that of Fred Allen, and for the same reason. The mass medium he conquered was radio. While TV sitcoms are rerun in syndication and old movies are dusted off and screened from time to time, old time radio is really tucked away in a sort of gated preserve. You really have to seek it out in order to be exposed to it, and as a consequence few people are. Radio was a writer’s a medium. Those with a verbal gift could succeed there. And there were certain ones (like Gardner and Allen) who would succeed only there, and did not do as well in front of cameras. Thus they are not as well remembered as Jack Benny or Burns and Allen for example, who also conquered film and television.

At any rate, Gardner was a working class guy from Astoria, Queens who dropped out of high school to play piano in saloons. He served in World War One, then worked at various odd jobs, then got into advertising and public relations, and produced some live theatre. First there was a show called College (or Collitch) which he produced off-Broadway at the Cherry Lane. On Broadway he produced a 1931 play called Coastwise starring his wife Shirley Booth whom he’d married in 1929. Also for Booth, he wrote and directed the 1934 Broadway play After Such Pleasures, adapted from a book by Dorothy Parker.

In the ’30s Gardner broke into radio, directing the likes of Burns and Allen, Al Jolson, Fanny Brice, Rudy Vallee, Lionel Barrymore, Bing Crosby and Ripley’s Believe It Or Not. He created his signature character, the malaprop-prone Archie for a show called This Is New York, and this evolved into its own series Duffy’s Tavern. Following the theme music (“When Irish Eyes Are Smiling”), each episode of Duffy’s Tavern opened with Archie answering the telephone with the same lines: “Duffy’s Tavern, where the elite meet to eat, Archie the manager speaking, Duffy ain’t here—oh, hello, Duffy.” Duffy himself was never on the show. Gardner did a great deal of the writing himself, but he also had a now-legendary writing staff that included Sol Saks, Abe Burrows, Larry Gelbart, and a young Dick Martin, later of the team of Rowan and Martin. For the first couple of years, his wife Shirley Booth was in the cast, and once it got rolling the show had top celebrity guest stars from Hollywood and popular music every week. In 1945, Paramount produced a star-studded Duffy’s Tavern movie. (Interestingly, Fred Allen’s It’s in the Bag came out that same year).

Towards the end of its run, Gardner started to produce the show out of Puerto Rico (there were tax incentives) and the show took a downward turn, as his celebrity guests were unable (or unwilling) to travel there. The show ended in 1951. Gardner tried a TV version in 1954, but was uncomfortable on camera, and it lasted only one season. (By this time, too, The Jackie Gleason Show was on the air, with its similar “Joe the Bartender” segments, and I can’t help wondering if that was a factor). But Gardner had plenty else going on to keep him busy. In 1951 he produced the thriller The Man With My Face, starring Barry Nelson. He wrote episodes of Annie Oakley and The Cisco Kid. He appeared on The Ed Sullivan Show and Alfred Hitchcock Presents. He died in 1963 of liver failure.