A tribute today to the immortal Lucille Ball (1911-1989). People older and younger than me know Lucy primarily for and initially from her groundbreaking tv series I Love Lucy (1951-1957). But those just my age (or a hair older) got there through a more circuitous route…seeing her first in her later tv programs The Lucy Show (1962-68) and Here’s Lucy (1968-1974) as we were growing up and then experiencing I Love Lucy later in reruns.

These colorful family shows were quite a bit different from I Love Lucy. The mature Lucy played a ditzy widow who worked for the hilariously irate Gale Gordon, her foil. In the show’s last incarnation her actual children played her screen children, giving the show a sort of contemporary flair. Desi, Jr. actually made his show biz debut on I Love Lucy, when he was still in his mother’s womb, provoking quite a bit of controversy:

Lucy was an institution at that point, the only female equivalent of say, Bob Hope,(with whom she co-starred in films in the 60s) and she seemed it. Later in the mid 70s, during the 50s nostalgia craze, they began showing reruns of I Love Lucy on our local tv station — a big event, and I watched every episode. But as I got older I lost my taste for her. As part of the process of working on Chain of Fools I began to rediscover my enthusiasm. Nearly every female colleague I know cites her as a major hero and influence.

Lucy’s comedy pedigree is rather amazing — she had countless opportunities to learn from the best, and she did. Starting out as a model and Broadway chorus girl in shows like Earl Carroll’s Vanities she moved to Hollywood in 1933 where her progress was slow, but also inexorable. She was one of the Goldwyn Girls in Eddie Cantor’s Roman Scandals (1933). but she got a speaking part in the Three Stooges short Pigskin Parade the next year.

She got bit parts in the Fred Astaire-Ginger Rogers movies Roberta, Top Hat (both 1935) and Follow the Fleet (1936). Then she began to get decent parts: she was a notable part of the ensemble in Stage Door (1937), played opposite the Marx Brothers in Room Service (1938), and co-starred with Red Skelton in DuBarry was a Lady (1943).

Along the way she was also becoming a radio star on The Phil Baker Show and Jack Haley’s The Wonder Show. In 1948, she got their own radio show My Favorite Husband, which (with the addition real-life husband Desi Arnaz) was later adapted into the tv show I Love Lucy. The premise of the show is similar to The Honeymooners, but with the genders reversed. Lucy and her best friend, Ethel (Vivian Vance), sneak around enacting hare-brained schemes behind their husbands’ backs (Arnaz and vaudeville veteran William Frawley). In the end they’re always caught and “put back in their places,” making the show feel something less than progressive to modern sensibilities. It’s kind of like A Doll’s House meets Waiting for Godot. Nora never gets to escape. I think of I Love Lucy as the first of the existentialist sit-coms. Gilligan’s Island (1964-67) and Hogan’s Heroes (1965-1971) both followed similar “Myth of Sisyphus” premises.

LUCY’S FIRST SHOW: “Lucy, what ha’ you been up to? When I’m done cavorting at the night club all night with beautiful chickens I expect to come home to find dinner cooked and the house clean! And don’t even think of sneaking out of the house to realize your dreams!”

LUCY’S SECOND SHOW: “Are you RETARDED, Mrs. Carmichael!? I merely asked you to sharpen these pencils, a simple enough request, and now you’ve ruined them all, and I’ll have nothing to take notes with during the big meeting! I ought to send you packing to the poorhouse, but I suppose that would make me the BAD guy, since you’re a widow!”

LUCY’S THIRD SHOW: “Wha- (sputtering) someone’s spilled all the coffee! An entire URN of coffee! Lucy, get in here NOW so I can wring your neck and throw your carcass out in the alley like I should have done years ago! Where are you hiding, Lucy? I’ll brain you with this cut glass book end, I swear to God!”

AT THE TIME, LUCILLE BALL WAS THE MOST POWERFUL WOMAN IN SHOW BUSINESS

Lucy the housewife’s situation would be unbearably bleak if not for the slapstick skills of Lucy the clown. First there’s her comic mask, with her enormous, blank doe-eyes, framed by the maximum acceptable amount of make-up: drawn-on eyebrows in a perpetual state of surprise, eye-lashes conveyed as big splashes of black, and a mouth so covered in red, pink or orange it looks like she’s wearing a pair of wax lips. And of course her bright red wig, not perceptible of course until the shows began shooting in color. She had a small repertoire of broad, ritualistic, emotional reactions. For example, she was the most famous comedy crier since Stan Laurel. But she could also do shock, indignation, “crossness,” and her own laughter was infectious.

Add to this her slapstick skills. In her day she was routinely compared to Chaplin, Keaton, Lloyd, Skelton, and Harpo Marx. She wasn’t subtle about encouraging the comparisons. She reprised the famous mirror scene from Duck Soup with Harpo on I Love Lucy in 1955; she dressed as the Little Tramp and did a Chaplin routine on The Lucy Show in 1963. The famous “Vitameatavegamin” (where Lucy gets progressively drunker while hawking a health tonic) is an obvious take on Red Skelton’s “Guzzler’s Gin” routine.

But her original slapstick was plenty impressive as well. Her most famous routine of all was the candy assembly line segment in the episode “Job Switching,” where she falls behind and winds up trying to hide all the chocolates that are backing up at her work station. Other favorites include “Lucy’s Italian Movie” (that’s the one where she gets into a big vat and stomps on grapes), and “L.A. at Last” where she dons a disguise so that she can meet William Holden and he, lighting her cigarette, accidentally sets her nose putty on fire.

And she kept it going through two decades and three sitcoms, the latter two of which were remarkably similar to one another.

Along the way there were many guest stars who were actual stars. People like Sammy Davis Jr:: 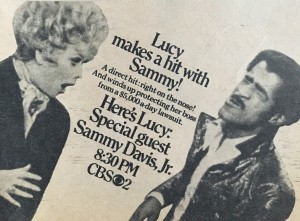 And Elizabeth Taylor and Richard Burton (an episode that incorporated a famously expensive ring Dick had given Liz that made all the tabloids):

Then — that earth shattering day:

After the mid 70s, Lucy slowed her output somewhat. There were a couple of tv movies and occasional appearances on shows like the Dean Martin Celebrity Roast. She briefly tried to emerge from retirement in 1986 with the disastrous Life with Lucy, which was canceled after only half a dozen episodes. (Clips are available on Youtube and it’s somewhat painful; the elderly Lucy was simply out of touch with the sensibilities of modern audiences).

The latest Lucy news is that as of August 2018, The National Comedy Center is now open in Jamestown, NY, Lucy’s hometown, just a half hour away from Chautauqua. Can’t wait to make a pilgrimage to both (and I’ll report back here when I do)! 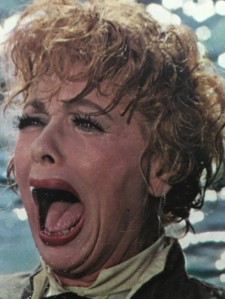 To learn more about slapstick comedy, including Lucille Ball, please check out my book: Chain of Fools: Silent Comedy and Its Legacies from Nickelodeons to Youtube, just released by Bear Manor Media, also available from amazon.com etc etc etc