The Rising and Setting of “My Three Sons”

Actor Fred MacMurray (whose birthday it is today) had at least three public incarnations during his long career. In the first, he was a jazz age musician and good-looking crooner, as we wrote about here; in the second, he was a Hollywood contract player in movies like Double Indemnity (1944) and The Apartment (1960). In the third he was a star of family comedies, such as the Disney Films The Shaggy Dog (1959), The Absent Minded Professor (1961) and Son of Flubber (1963), as well as his long running sit-com My Three Sons (1960-72). In the latter MacMurray played a widower with three sons to raise while working at his demanding job as an aeronautical engineer (the ultimate post-war job, eh?)

My Three Sons was on the air so long it changed SHIFTS. The first leg, from 1960 through 1965 was a black and white show on ABC, which featured William Frawley (formerly of I Love Lucy) helping out as the boys’ grandfather, Bub. The boys were Tim Considine (Mike), Robbie (Don Grady) and Chip (Stanley Livingston). Considine had worked with MacMurray on The Shaggy Dog; we wrote a separate post about him here, for he has an interesting vaudeville connection. Other than the odd clip in a TV special, I’ve never seen any of this first leg; I grew up watching up the second leg of the series in syndication. 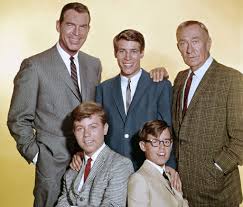 My Three Sons moved to CBS for the 1965-66 season. At this stage the show was in color. The setting was moved from the midwest to Los Angeles. Mike had moved out to marry his fiance (who’d been played by Meredith MacRae) and was essentially written out of the series as though he’d never existed. A third son, the bespectacled Ernie, played by Barry Livingston, Stanley’s brother) was adopted to justify the show’s name. And the ailing William Frawley was replaced by crusty old William Demarest as Uncle Charlie, who sort of became a high point of the show, amping up the male energy considerably.

This may be why there were even more changes as the series went on: it got all MUSHY! In 1967 the extremely attractive Tina Cole was brought in to play Robbie’s girlfriend (then wife) Katie and they proceeded to have triplets — three more sons (why has no one made THAT show? Actually they did. There was a pilot called Three of a Kind made in 1971 but it wasn’t picked up). In 1969 the lovely Beverly Garland was brought in to be Steve’s new wife Barbara, accompanied by her young daughter, the monstrous Dodie (Dawn Lyn). But that’s not all! In 1970, Ronne Troup (Bobby Troup’s daughter; Julie London’s stepdaughter) was brought in to play Polly, Chips’ girlfriend (then wife). Basically they married off everybody but the dog. At this stage the show ought to have been renamed My Three Sons, Their Wives, My Three Grandsons, My Second Wife, and My Stepdaughter!

By 1972, the ratings began to slip and the show was cancelled at around the same time as CBS instituted its Rural Purge, which we wrote about here. The show was always designed to be more heartwarming than hysterically funny. In fact during the first leg on ABC it hadn’t quite declared itself as a sitcom. As much as a show of its kind could, it reflected changing times. Towards the end of its run, the boys grew their hair longer, and there were conversations with the older sons with respect to their relationships with their girlfriends that hinted obliquely at teen sex. Still — it was sort of canned and controlled and there was no way it was going to compete in the Norman Lear era. Soon the single-parent shows would be One Day at a Time and Alice — still sitcoms but with a hair more realism (and an audience instead of a laugh track).