They really don’t make them remotely like Red Skelton any more. It’s not hard to analyze. As he would have been the first to admit, he was full of corny Indiana hokum. His humor was gentle and kind-hearted. The present age is cynical, hard-edged and unforgiving of anyone or anything that seems out of step. But if for no other reason but his comic versatility, he is an extremely interesting guy to study and to emulate. He may be the only person ever to nail just about ALL of the modern (and some of the ancient) forms of comedy: clowning, pantomime, stand-up, radio, movies, television — nailed them ALL. In some respects, he was like Chaplin, Lou Jacobs, Bob Hope, Fred Allen, and Milton Berle all rolled into one. Except…well, he was pretty corny.

He was born on this day in 1913. His father, an alcoholic circus clown, was dead before Red came into the world, so it fell to Ed Wynn, who gave a couple of free passes to newsboy Red during a local engagement, to introduce the boy to the theatre. At the age of ten he ran off to join a medicine show, and in rapid succession ended up working in nearly every kind of live show biz format then extant: riverboats, a Tom show (i.e., “Uncle Tom’s Cabin”), circus and burlesque. While working in burlesque he met the woman (16 year old girl, actually), who would be his comedy partner, wife, and later, business manager, Edna Marie Stillwell. Throughout the Depression, the pair worked dance marathons, nightclubs, what remained of vaudeville, and nightclubs. In the late 30s, Red started to make a hit and Edna quit performing in order to manage him. In ’37 he debuted on Rudy Vallee’s radio show. The following year he made his first films, including two Vitaphone shorts, one of which “Seeing Red” is a real eye opener on the vaudeville experience (Red hosts a mini vaud show).

His career really took off in the 1940s, when he became MGM’s top comedy star (see my post on his comedies here), and had a hugely successful radio program, on which he created a constellation of crazy comic characters to rival Fred Allen’s. In the 50s, he conquered television, where he had one of the top rated variety shows until 1971, when, desperately out of fashion, he was summarily (and disrespectfully) canned. Red continued to perform live for another couple of decades, and passed away in 1997. 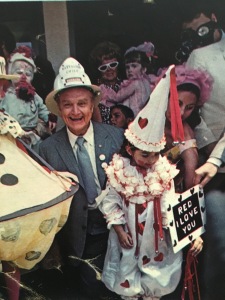 To learn more about Red Skelton and slapstick comedy, please check out my new book: Chain of Fools: Silent Comedy and Its Legacies from Nickelodeons to Youtube, just released by Bear Manor Media, also available from amazon.com etc etc etc, and to find out more about  the history of vaudeville, in which Red also participated, consult No Applause, Just Throw Money: The Book That Made Vaudeville Famous, available at Amazon, Barnes and Noble, and wherever nutty books are sold.