Of Eve Arden and “Our Miss Brooks” 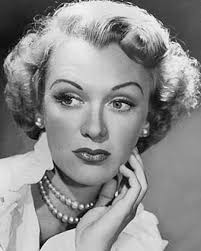 When I was a kid (it seems to me) a lot of the older women emulated Eve Arden (Eunice May Quedens, 1908-1990). Arden was beautiful and glamorous, but also imposing. She stood 5’7″, which is not quite “giant” status for a woman, but she was Germanic and big-boned, with a voice that was not precisely mannish but was definitely waxing contralto. It’s mostly her sense of style I’m thinking of, an almost aggressive effort to look attractive, all hairspray, severe make-up and costume jewelry. When I think of older teachers and certain aunts and family friends, I associate them with this kind of steam-roller, working class beauty. What’s wild is, this influential woman had become a star in the 1930s, and was STILL one in my day (the 1980s).

Originally from Mill Valley, California (outside San Francisco), she started out acting as a teenager with Henry “Terry” Duffy’s stock company. She was only 21 when she was cast in her first film, the musical Song of Love (1929) starring Belle Baker and Ralph Graves. She also had a small role in Dancing Lady (1933) starring Joan Crawford, whom she would support so memorably in Mildred Pierce a dozen years later. At this early stage she was still billed as Eunice Quedens. In the early ’30s she changed her name and went east to tackle Broadway. Her early Broadway shows included The Ziegfeld Follies of 1934 and 1936, and Parade (1935). In 1937 she returned to Hollywood. The films of this period included Oh, Doctor! (1937) with Edward Everett Horton, the all-star Stage Door (1937), and the musicals Cocoanut Grove and Having a Wonderful Time, both 1938. In the highly productive year of 1939 she did seven movies, including The Marx Brothers’ At the Circus, and then returned to Broadway to appear in Very Warm for May. This was followed by Two for the Show (1941) with Betty Hutton and Keenan Wynn. In 1941, she spent a lot of time with Red Skelton, appearing with in the film Whistling in the Dark, followed by the Broadway show Let’s Face It (1941-42). She was also in the movie version of Let’s Face It (1943), in which Skelton had been replaced by Bob Hope. Other films of the period include the 1940 screen version of No, No, Nanette; Ziegfeld Girl (1941), Cover Girl (1944), Earl Carroll Vanities (1945), the immortal classic Mildred Pierce (1945), and the Cole Porter bio-pic Night and Day (1946) starring Cary Grant. 1946 was a Danny Kaye period: she was a regular on his radio show and appeared in his film The Kid from Brooklyn.

The radio experience with Kaye led to her own starring vehicle, and it was to become what she was best known for, the sitcom Our Miss Brooks. There were three iterations of the franchise: the original radio show (1948 to 1957), the better remembered TV version (1952-56), and a movie (1956). It thus was part of American pop culture for eight years, followed by syndication ad infinitum. Arden played the title character, a tart-tongued schoolteacher. Technically the character was an old maid, and she did indeed moon over certain good-looking male colleagues, but it wasn’t the usual schoolteacher stereotype of a hideous old crow who would never land a man. The premise built on her already well-established character from the movies. She was the kind of woman who was intimidating to men: self-assured, funny, not given to flattery or submissiveness. The weekly repetition crystalized the Eve Arden persona. She possessed to-die-for comic timing, a Jack Benny-like instinct for letting a set-up land and linger before she delivered her retort. That is a perfect skill for radio. On the screen though, it was even better because you had the benefit of those gorgeous, pale, and merciless eyes, not unlike those of Marlene Dietrich or (later) Valerie Harper. She would stare off into the distance as though she were pulling her witticism out of the ether, like the Word of God being delivered to Joan of Arc. Her foil was the great Gale Gordon, who played a similar role on radio and television for Lucille Ball, who happened to be a pal of Arden’s at least since the days of Stage Door.

When Our Miss Brooks wrapped, she tried another sitcom, The Eve Arden Show (1957-58), but that one didn’t fly. She then returned to the big screen for two heavy dramas, Anatomy of a Murder (1959), and William Inge’s The Dark at the Top of the Stairs (1960). She kept a hand in television comedy with several guest appearances The Red Skelton Hour and other shows, and then co-starred in another sitcom The Mothers-in-Law (1967-69) with Kaye Ballard, which we wrote about here. She did movies like the AIP comedy Sergeant Deadhead (1965), Disney’s The Strongest Man in the World (1975) and Grease (1978) and Grease II (1982), where her role as the school principal had echoes of Our Miss Brooks, only now she was in the Gale Gordon role! Her other late movies included Under the Rainbow (1981), the Chevy Chase comedy about casting Little People for The Wizard of Oz, and Pandemonium (1982) a slasher movie parody in which she played a woman’s prison warden. She was brilliantly cast as Bea Arthur’s aunt in a 1977 episode of Maude. Of over 100 screen credits, her last was a 1987 episode of Falcon Crest.

As for her latter-day legacy, I direct you posthaste to the life and career of Mr. Charles Busch, who nails Eve Arden so completely in line readings sometimes that I double over in pain from laughing. He does it not in the spirit of ridicule, but from real, evident affection and admiration. If you are human you cannot hate Eve Arden. (With the possible exception of Robin Williams, who made fun of her on his album Reality: What a Concept, although if you consider that he is from Ork, we may preserve the dictum intact).