Judy Garland (and the Gumm Sisters) and Vaudeville

The Gumm Sisters: Little Frances is on the right

One of the two or three major factors that led your author to the subject of vaudeville was a childhood obsession with the film The Wizard of Oz. Almost all of the major cast members were vaudeville veterans: Bert Lahr, Ray Bolger, Jack Haley, Charley Grapewin (Uncle Henry) and Singer’s Midgets. Judy Garland, 16 at the time of her casting, had spent ten of her 13 years in show business on the vaudeville stage.

This was possible because she was born in a vaudeville family and grew up in a vaudeville house. At the time of her birth in 1922, her father Frank Gumm, a singer, and her mother Ethel, a piano player, were managing (and performing at) the New Grand Theatre in Grand Rapids, Minnesota. The couple had toured for years as “Jack and Virgina Lee, Sweet Southern Singers”, but settled down to raise their three daughters. It was natural for Mary Jane, Dorothy and Frances to join their parents onstage. Frances’ (Judy’s) debut came at age 3, when she sang 7 choruses of “Jingle Bells”, to wild acclaim. 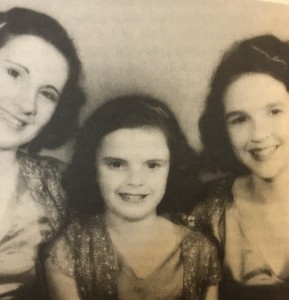 The family formed an act out of the Gumm Sisters, with Ethel as manager. They toured for a couple of years, then, in 1927, made the Los Angeles area their new home base, in the obvious hope that they’d get into pictures. Their first big break was a 1928 booking in the Meglin Kiddie’s Review at Loew’s State Theatre. “Baby” Gumm was by now the star of the act and was doing solo numbers and a Fanny Brice impression by this point. The act played all over the west, did shots on radio and Vitaphone shorts.

George Jessel is credited with giving them their new stage name. At a 1931 booking at Detroit’s Oriental Theatre where he was M.C., the girls were mistakenly billed as the “Glum Singers”. Jessel noted that “Gumm” wasn’t much better, and suggested they take the last named of NY drama critic Robert Garland.

In 1934, “Frances” decided to become Judy, which she took from a favorite Hoagy Carmichael song. At this time, the Garland Sisters had a weekly gig at the Wilshire-Ebell Theatre in Los Angeles, which is where scouts from MGM spotted her. That year Louis B. Mayer announced, “We have just signed a baby Nora Bayes.”

This was an apt characterization, for, just like Bayes, Garland combined an incredible voice with an uncanny gift to carry the emotional content of a song. She “acted” the song. Such intensity must be incredibly draining; it no doubt contributed to Garland’s emotional problems later in life.

In 1951 she headlined the revival of two-a-day vaudeville at the Palace. Originally booked for 4 weeks, Garland and the show were held over by popular demand for 19 weeks.

Garland’s last years were characterized by breakdowns, failed marriages, drug problems, collapses, and cancelled engagements, eventually ending in her unfortunate death by drug overdose in 1969. But the memory of how she was at her peak continues to endear her to millions of devoted fans.

To find out more about the history of vaudeville including acts like the Gumm Sisters and Judy Garland, consult No Applause, Just Throw Money: The Book That Made Vaudeville Famous, available at Amazon, Barnes and Noble, and wherever nutty books are sold.