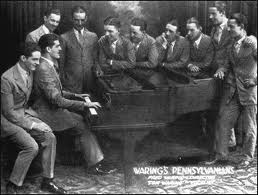 Talk about a distinctively American Renaissance man: Fred Waring not only had his own orchestra, but he also invented the blender!

Born in Tyrone, Pennsylvania in 1900, Waring had all the INGREDIENTS for future success in music, starting his career as leader of his local Boy Scout Drum Corps. As a teen, he, partner Poley McClintock, and two others BLENDED TOGETHER to form the Waring-McClintock Snap Orchestra. The group later became Waring’s Banjo Orchestra, which toured dances and fraternity events and the like, with their CHOPPY new jazz sound. Waring became so successful that he SHREDDED his plans to get an architectural engineering degree at Penn State. Changing the name of the group to Waring’s Pennsylvanians he toured the country through the 1920s, playing a palatable PUREE of musical offerings. Radio programs such as The Old Gold Show and the Ford Dealers Show came into the MIX. The Pennsylvanians played the Palace in the early 30s, but by that time, vaudeville work was DICEY and the presentation houses were their real bread and butter. The group’s heyday extended through the War years, and they began to do television work in the late 40s. Waring’s body and soul were definitively SEPARATED in 1984.

To find out more about these variety artists and the history of vaudeville, consult No Applause, Just Throw Money: The Book That Made Vaudeville Famous, available at Amazon, Barnes and Noble, and wherever nutty books are sold.