Today is the birthday of the great American songwriter Howard Hoagland “Hoagy” Carmichael (1899-1981), responsible for “Stardust”, “Skylark”, “Georgia On My Mind”, ‘The Nearness of You, “Heart and Soul” and countless others. He was named Hoagland after a circus that was passing through his town on the day he was born.

Indiana native Carmichael learned piano from his mother, who played professionally at local nickelodeons. later he was to pick up tips from Indianapolis jazz king Reg DuValle while he worked as a manual laborer and worked towards his law degree. (Carmichael later graduated and passed the bar but his musical career quickly swallowed up any prayer of a practice.) When still a student he met Bix Beiderbecke, and the two played together. It was Beiderbecke who recorded some of Carmichael’s first compositions in the mid 20s, and his star rapidly rose. Soon everyone was recording them. In the late 1930s, he moved out to Hollywood and became an occasional movie actor on top of supplying songs to films.

Here, with something to offend at least two ethnic groups, from To Have and Have Not (1944), the haunting “Hong Kong Blues”:

I just love the sound of voice…wooden-sounding, American. And, because I can’t wait until next year to post this other amazing clip, you get a double dose today. Here, from a 1961 episode of The Flintstones is Carmichael (with Wilma and Betty) singing “The Yabba-Dabba-Doo Song”:

As this TV Guide article attests, he was still going strong into the 1970s, even if he wasn’t REALLY bridging the Generation Gap: 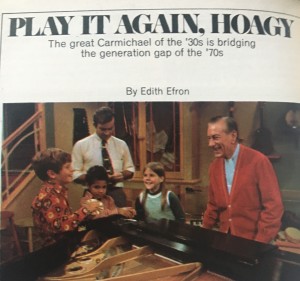