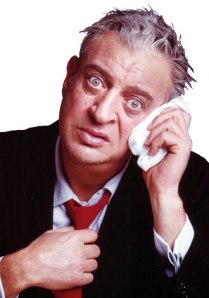 Today is the birthday of Jacob Cohen, a.k.a. Rodney Dangerfield (1921-2004). The son of vaudeville comedian Phil Roy (Philip Cohen), he began writing jokes for other comedians as a teenager, and began going onstage himself at age 20. For a decade he struggled under the name Jack Roy, working as a comic, singing waiter and even a high dive daredevil act before briefly retiring for a few years to work as an aluminum siding salesman. Circa 1960 he returned with a new gimmick: a stage name copped from an old Jack Benny character, and a highly defined comic persona — a loud-mouthed shlemiel. The new character turned out to be a perfect engine for jokes, and the new Jacob Cohen — Rodney Dangerfield — was a hit with audiences. A 1967 spot on the Ed Sullivan show made him nationally. Following that, he was a constant fixture in popular culture for the rest of his life, through tv appearances, record albums and gigs at prominent nightclubs. In the 1980s his fame achieved new heights with a series of hit movies, Caddyshack, Easy Money and Back to School, and a hit single (and MTV video), Rappin’ Rodney. He was also instrumental in bringing a lot of younger comics up through his nightclub Dangerfield’s, which he opened in 1969.

In his time of greatest fame (1967-2004), Dangerfield was something of a throwback to the days of vaudeville, burlesque and Borscht belt comics, a kind of successor to Milton Berle and Henny Youngman. He was a “joke” comedian in an era when almost every other stand-up comic was moving away from that modus operandi. Set-up, punchline. Set-up, punchline. In some ways, he became a sort of lightning rod for that energy, to be the lone representative of that tradition, and thus to symbolically embody it. He became the comic’s comic. The baton he dropped when he passed away at age 83 has yet to be picked up. The other aspect I cherish about him that’s increasingly rare (though it used to be thoroughly common in show business) is that his character is bluntly, unapologetically working class, just as the man himself is.

Now here he is an a cool, earlier clip from 1970, before the “No respect” schtick was fully formulated: