A Star is Born — And Reborn

The recent remake of the perennial classic A Star is Born prompts this post. As this is the fourth or fifth explication of this latter day fairy tale however (depending on what you’re counting) I figure a little primer might be in order for A Star is Born virgins. It’s roots are close to 90 years old. Much like King Kong, it’s a story apparently so strong that it’s impossible for me to choose a favorite version. Each iteration is a reflection of its own age. Yet each version to my mind contains the same story problem, which doesn’t appear to trouble other ticket buyers: it’s not a real romance. Baked into the set-up is a cynical adulteration. The situation is inherently transactional, so we can’t know if the love story at the center of it was ever pure. And no version of the story has ever properly dealt with this, let alone solved it.

Many believe that its story of a doomed romance between a rising female star and a dissipated male one is loosely based on the real life example of Barbara Stanwyck and Frank Fay. But What Price Hollywood? (1932), the very similar film on which A Star is Born seems partly based, is supposed to be inspired by the case of Coleen Moore and her husband, producer John McCormick, as well as the tale of another producer Tom Forman, who committed suicide.  But really there is no shortage of similar examples from the sordid annals of show business.

At any rate, without further ado, here are the existing versions: 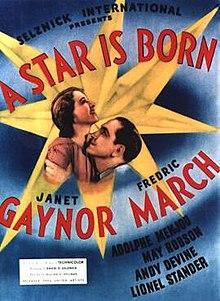 Familiarity with the original A Star is Born would be a good indication of whether someone is a hardcore classic film fan. The 1954 and 1976 remakes have plenty of devotees; people who’ve actually seen the first version are necessarily fewer in number, I think. (I’d never seen it until a TCM screening a few years ago). Today the role of Esther Blodgett/Vicki Lester is what star Janet Gaynor is best remembered for (as a side note, her birthday is in just a couple of days). Fredric March is the alcoholic Hollywood star Norman Maine who discovers her, and his is perhaps the most jovial and likable take on the role. He’s a hail-fellow-well-met/ “rosy glow” sort of drunk, and you can easily imagine his drinking problem growing out of the show business life, of being an entertaining guy at parties. This version is a feast of old time character actors: silent star May Robson as Esther’s grandmother; Clara Blandick as her aunt (foreshadowing Wizard of Oz co-star Judy Garland’s appearance in the remake), Adolphe Menjou as a producer, Lionel Stander as a publicity agent, as well as Andy Devine, Owen Moore, Edgar Kennedy, George Chandler, and J.C. Nugent. Directed by William Wellman, the film was shot in Technicolor, making it a special event in those days of near-universal black and white. And all the backstage scenes and gossip and namedropping and scuttlebutt give the film a feeling of a peek behind the curtain; aspects of it almost seem documentary, like you are really getting some kind of privileged private tour of the show business world. It’s as though you’ve been given the opportunity to step into a tabloid story, equal parts glamour and gutter.

One interesting innovation: While What Price Hollywood? had climaxed with a suicide by gunshot, A Star is Born switches to an intentional drowning in the ocean, which somehow seems much more original and “Hollywood”. It is thought the drowning scene may have been inspired by the death of former silent star John Bowers the previous year.

There are many people, I have no doubt, for whom this movie is not just their favorite version of this tale, but their favorite movie of all time. It’s directed by George Cukor, who’d been offered the 1937 version but turned it down at that time, feeling it was too similar to What Price Hollywood? By 1954 however there’d been a lot of water under the bridge, and Judy Garland’s casting in the lead turns it into a musical, which catapults it into a very different world. In fact, when I think of this film, that is the element that comes into my head first: Judy’s moving rendition of “The Man That Got Away”, and the insane, lengthy, bloated “Born in a Trunk” sequence. James Mason is easily the least appealing of all the Norman Maines: unlike any of the others who play the part you’re at a loss to know why she is even with him. He reminds me a lot of Ray Milland from Lost Weekend a decade earlier. He’s kind of an unpleasant, boorish drunk and nothing else. I’ve always taken a kind of sadistic glee in the scene where he spoils Vicki’s Oscar acceptance speech — both high melodrama and high camp, and I’ve quoted it in at least two of my plays. Jack Carson, usually comic relief, acquits himself well in a dramatic role as Vicki’s publicist.

Above all, there is a kind of tragic irony underlying this one. Garland, at this stage in her career, was already much more like Norman Maine than like Vicki Lester. Though only 32 at the time, she was drug-dependent, and an emotional wreck, and though this part won her lots of accolades and she came close to a Best Actress Oscar for it, her screen career was to be spotty after this. We watch this movie now with a kind of meta-awareness, taking in several levels. And with a playing time of over three hours, it is a real epic, one many movie fans gladly sign up for. 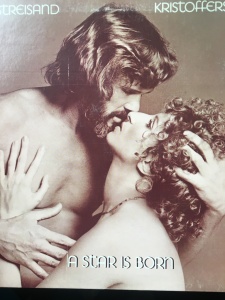 This one has grown on me — a lot — over time. I was a tween when it came out, uninterested in tales of romance or the music of Barbra Streisand. Today I watch it with equal parts nostalgia and camp-appreciation, and in both categories this movie is a gift that keeps on giving. This version of course transplants the old Hollywood story to the modern recording industry — the rock and pop music world. Kris Kristofferson is a Jim Morrison like rock star who spends most of the film shirtless, with a bottle of Jack Daniels in his hand. Streisand’s character reminds me somewhat of Laura Nyro…kind of in the rock world, but really a more legit kind of performer. (I’d say she’s playing herself, but ya know what? Streisand has NOTHING to do with the rock world. Whereas, Nyro, who wrote some songs that Streisand covered, played the Monterey Pop Festival!) Streisand had been a romantic lead before, in films like The Way We Were, and there are some echoes of that here. And Kristofferson, as always, is surprisingly effective. He’s always been a diamond in the rough. Even if he weren’t a good actor (he is one) his voice and face would be production values in themselves. The contrast here between this shit-kickin’ dude and the glamour-addict Streisand, who literally wears a different outfit in every shot, is pretty fascinating. Granted, this is not what you would objectively call a “good” film. All versions of this tale are sort of soap operas — though extremely enjoyable soap operas. This one feels a great deal like a TV movie, but it has become such a period piece the pleasures in watching it (for me) have gone through the roof. Plus, it has Gary Busey, Paul Mazursky, Tony Orlando and Rita Coolidge! And Kristofferson commits suicide by drunkenly cracking his jeep up in the desert, in a scene I can’t help finding unintentionally funny. I’m a terrible person.

I was primed to like this new version of the perennial classic; I’m a fan of both its stars (Bradley Cooper and Lady Gaga), and I like every existing version, which is why I bother with this at all. The buzz was very positive, btw: a 94% approval from Rotten Tomatoes, and Slate’s Dana Stevens, whom I trust implicitly, has written this glowing review here. It was majorly hyped on the talk show circuit, with smart people like Steven Colbert raving about how powerful it was. And I must say, as a statement, the present version hits at a particularly fortuitous time. Dickheaded male loses; strong, ambitious, talented woman wins. That sounds like a winning box office recipe for 2018. The dude even humiliates himself with peepee. (Yo, we’re still waiting on that tape, Tom Arnold!)

So I was shocked at how little I liked it. Not only does it not solve the inherent problem I described in the opening paragraph, but it has new ones. As writer/ director/ star/ and songwriter/musician, Bradley Cooper has made a slick and impressive vehicle, but one that unavoidably seems drunk on the auteur’s own wonderfulness. Every frame seems to drip with his self-regard: not the character’s but Cooper’s. In fact, the film seems not worlds away from the ones we wrote about here, in particular Kevin Costner’s The Postman. Cooper makes of himself both a sex symbol and a martyr. I must say, having the actor playing Norman (now “Jack”) Maine be the AUTHOR of such a pantomime, adds a whole new dimension to the proceedings, but not a fortunate one.

The fact that I’m not a huge fan of the kind of music his character plays was not really the movie’s fault. It did hinder me from enjoying it, but that’s not a factor in the film’s dramatic weaknesses. Like previous versions, this remake of A Star is Born is rife with implausibilities — fixable ones. Contemporary show business is for the most part broken up into countless mutually exclusive conceptual neighborhoods. It’s a rare star nowadays who breaks through that into GENERAL fame (Gaga is one of them.)  So a country rock shit-kicker like Cooper’s character, however strong his regional fanbase, would be unlikely to be well known to Gaga’s character, or the wider public, or ABOVE all, the drag queens at the nightclub where Gaga performs. Furthermore, his character is shit-faced from the moment she meets him. She falls in love with THAT? When? Why? I never saw an opportunity onscreen for her to even briefly see a positive side to him.

Naturally, all of Gaga’s musical numbers were great. As for her acting, it seems to me that she managed to get by without disgracing herself (she never peed her pants, to use a handy metaphor), but is in no way deserving of the crazy accolades she received, a fact which she is smart enough to know, and seems to articulate whenever sycophants rave about it. For such a huge star, she seems to have brought a becoming humility to the enterprise, and so she comes off far better than her costar, who didn’t.

There seems to be a patronizing quality to a lot of the hype. Sam Elliott for example. He’s a terrific actor (as we wrote here), who seldom gets a chance to expand his dramatic chops. People who saw this film are like “Sam Elliott can act!”. A) We already knew that; and B) He’s only in the movie for ten minutes. There are so many unearned Oscar nominations for this movie, I’m like, “What, no Oscar for Andrew Dice Clay?”

At any rate, I’m very much looking to the 2033 remake, starring Gleek and Glook from the movie colony on Triton Base 6!