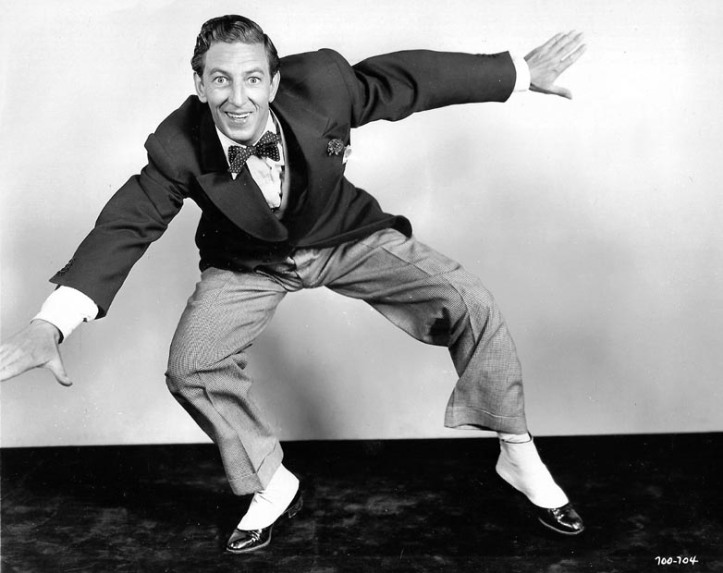 Best loved and remembered today for his role as the Scarecrow in The Wizard of Oz, Ray Bolger (1904-87) was well known in his time as an eccentric dancer or “legomaniac”.

“When I was a young bank teller, I was a wallflower,” Bolger once said, “ No girl would dance with me, because they never knew what the next step would be and neither did I.” So he turned those crazy long “rubberlegs” into a virtue, developing a style of dancing that seemed to defy both the laws of physics and of common sense.

He was born Raymond Bolger, in Dorchester, Mass. in 1904 – one of the few people in this book who actually performed using his given name. His father fell ill when he was a teenager, forcing him to began that stint as a bank teller, on top of his schoolwork. In 1920 he saw Fred Stone perform in Jack O’Lantern and was so inspired that he decided to become a dancer himself. Within two years, he was touring New England and the mid-Atlantic with the Bob Ott Music Comedy and Repertory Company. He briefly teamed up with a gentleman named Ralph Sanford for a vaudeville act called “A Pair of Nifties”, doing singing, dancing, and comedy. In the twenties and thirties he continued to work both vaudeville and the Broadway music stage. He debuted as a single at the Palace in 1927 and then worked in a Gus Edwards sketch with with Leota and Lola Lane called “Ritz Carlton Nights”.

Besides The Wizard of Oz, he can be seen in the films The Great Ziegfeld(1936), Rosalie (1937) Sweethearts (1938) April in Paris (1952) and one of many film versions of Where’s Charlie? (1952). The Ray Bolger Show was on radio in 1945 and there was a television version on ABC 1953-55. A more sophisticated variety show called Washington Square was attempted in 1957, but it was shortlived. In later years he worked the Vegas nightclubs. In 1976 at age 72 Bolger was still dancing an hour every day. He continued to perform until he passed away in 1987.

As talented as he was, Bolger’s career definitely banged its head against the glass ceiling of lookism. Ultimately he was a little too strange and ugly looking, with his large eyes, eagle nose, weak chin, and crooked teeth, for many starring roles. In short, he resembled a scarecrow.

To find out more about the history of vaudeville and great stars like Ray Bolger, consult No Applause, Just Throw Money: The Book That Made Vaudeville Famous