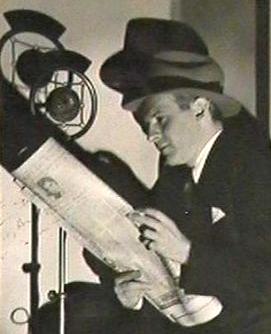 While best known today as the inspiration for Burt Lancaster’s cold-hearted, power-mad show biz columnist in Sweet Smell of Success, Walter Winchell actually got his start in Gus Edwards’ kiddie vaudeville troupe the “Newsboy Sextette.” He began filing regular pieces to the Vaudeville News in 1920, gradually graduating to the New York Evening Graphic and the New York Daily Mirror. Winchell essentially invented the modern gossip column, pre-dating Ed Sullivan, Louella Parsons and Hedda Hopper. His many years in show business gave him an inside track.

For roughly three decades (1930-1960) as a syndicated columnist and radio personality, Winchell was one of the most powerful men in the country, a super-patriot who gave no quarter to those he felt were a threat to the American way of life. His staccato, rapid fire voice is unmistakable (that’s him doing the narration on The Untouchables). Many of us know his style without knowing it was him who created it — the sound of a telegraph key, followed by “Good evening Mr. and Mrs. America from border to border and coast to coast and all the ships at sea…”

His fervent anti-communism put him at odds with the tenor of the country in the 1960s. Incidentally, he plays himself in one of my all-time favorite movies Wild in the Streets (1968). Winchell passed away in 1972 — the same year as his pal J. Edgar Hoover.

To find out more about these variety artists and the history of vaudeville, consultNo Applause, Just Throw Money: The Book That Made Vaudeville Famous, available at Amazon, Barnes and Noble, and wherever nutty books are sold.