Buddy (and Vilma) Ebsen: From Broadway to “Barnaby Jones” 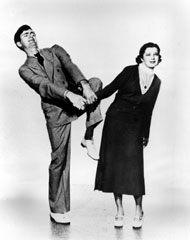 Though only in vaudeville for the briefest of times (and only in its dotage), Buddy Ebsen was a true trouper, who went on to distinguish himself many times over in television and film in later years. Notwithstanding his subsequent fifty year career in show business, Buddy owed all of it to the fame he first enjoyed in a dancing act with his sister Vilma.

The Ebsens were born in born in Belleville, IL, Buddy in 1908, Vilma in 1910. Their father, a former ballet master of Danish origin, ran the Ebsen Natatorium, a physical fitness camp and picnic ground. When his mother became very ill the family moved to Florida for the climate. Ebsen’s  father set up as a dance instructor, one of the many useful skills he took with him from his years at the Natatorium. Ebsen and his four sisters received large amounts of instruction – this where he and Vilma learned the building blocks of the routines that would later make them famous. The kids learned folk dances, story dances from a young age. In 1918, the Honey Bunch Company came through Orlando; company members kindly taught Buddy (who was then ten) some of their steps. Buddy and Vilma worked up a little act and got some bookings around Florida. He played a bumpkin and she played a dancing instructor. One summer, the famous dance instructor Arthur Murray hired them (ages 9 and 12) for his tea dancing program at Grove Park Inn in Asheville, South Carolina.

Ebsen briefly enrolled in college, but hadn’t sufficient funds to stay there. With the sort of pluck that is the exclusive property of the young, he boarded a train for New York armed with nothing more than $26.65 in borrowed money and one letter of introduction to his ex-college room-mate’s cousin.

Amazingly, Ebsen was hired his first day in New York, to be in the Lew Fields show Present Arms. The fairy tale beginning quickly evaporated though when he was fired at the end of the first week for being too tall (he was 6’ 3”). After a brief stint as a soda jerk, he was cast in Ziegfeld-produced Eddie Cantor vehicle Whoopie (1927). When the show closed, Ebsen brought Vilma to New York  to work with him. It was through Vilma that Ebsen finally got his big break. In 1930, she got a booking at a night club down in Atlantic City. During her act, she pulled Buddy up from his seat and improvised a duet with him. Walter Winchell happened to be in the audience and wrote up a rave in his next day’s column. That day, the pair received 32 booking offers. After that, Winchell continued writing about them every week, enraptured by among things, their wholesomeness.  As a result, the Ebsens’ very first booking as a team was at the Palace.

Vilma: “When dancing we were alter egos, you might say…we danced with that same wonderful relationship we shared as brother and sister.” Their vaudeville dance partnership lasted through the thirties. They were a hit with Benny Davis’ act Broadway Stars of the Future. Singing and dancing roles in a number of Broadway and Hollywood musicals followed. Unfortunately the screen parts followed only for Buddy. When the kids signed their MGM contract, they thought they were signing as a team. Unfortunately, the fine print allowed them to pick one and throw the other away. They chose Buddy.

Today you can still see him in films like Broadway Melody of 1938, Banjo on My Knee, and Captain January, but what Vilma was like as a dancer will always be a big question mark. 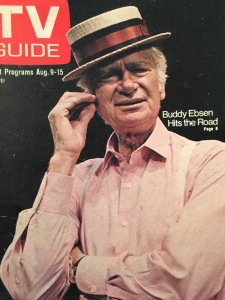 Buddy’s big shot at a large screen role was the 1939 MGM film The Wizard of Oz. He was originally slated to play the scarecrow, which would have been typecasting, with Ebsen’s tall, thin body, wild mop of hair, and folksy speaking voice. He was thrown over by legomaniac Ray Bolger, who aggressively engineered a takeover through his agent by already having worked out the appropriate eccentric dances and showing them to the producer.

Ebsen was then relegated to playing the Tin Woodman, and shot several scenes (including vocal tracks that you can still hear in the final picture) but suffered near-fatal poisoning when he inhaled aluminum dust used in his make-up. Ebsen spent several weeks recovering in the hospital, and missed the sort of opportunity that only comes once in a lifetime for most people. 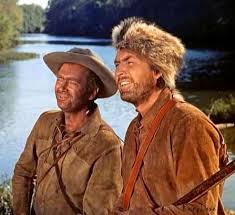 Luckily, for Ebsen there were other opportunities, but he would have to wait several years. His comeback began in the 1950s when he played Davy Crockett’s sidekick for Walt Disney in films and television. TV junkies know him best as Jed Clampett on The Beverly Hillbillies (a role he played 1962-71), and the title character in Barnaby Jones (1973-80).

Buddy Ebsen was still doing small roles in film and television well into the 1990s. He finally passed away in 2003. 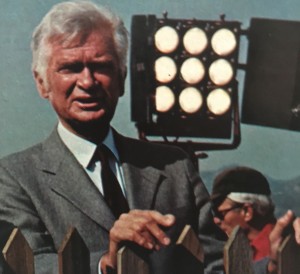 To find out more about Buddy and Vilma Ebsen and the history of vaudeville, consult No Applause, Just Throw Money: The Book That Made Vaudeville Famous, available at Amazon, Barnes and Noble, and wherever nutty books are sold.