I would have been thrilled as a child to have known that I am distantly related to this film and tv actor through my grandmother Flora Parker. He is best known for playing frontiersmen such as Davy Crockett (1955-56), Daniel Boone (1964-1970) and the dad in Old Yeller (1957). Though these were all before my time, they were still shown frequently on tv when I was a kid, and I was encouraged to embrace them (and did). Our family has strong historical connections to Crockett (whom I’ll be blogging about some more tomorrow) and Boone, and like the hero of Old Yeller I am named “Travis”.

Given his rustic and rough-hewn persona, one is surprised to learn that at the time Parker began finding employment as a movie extra in 1951 he was working on a master’s degree in theatre history. His undergrad major at the University of Texas had been in history, a background that would stand him in good stead when he began to be cast in westerns and frontier stories. His Texas accent and imposing height (6′ 6″) were even bigger assets. For some perspective, here he is, flanked by Arnold Stang and Peter Lorre, not tall men themselves, but still:

Parker’s progress was rapid. Based on his appearance in several minor roles in westerns and guest appearances on television, Walt Disney himself cast Parker as Davy Crockett in the titular mini-series in 1956, which was so popular it set off a national craze for coonskin caps among American schoolchildren. The kid in Wes Anderson’s Moonrise Kingdom sports one in homage to that fad. 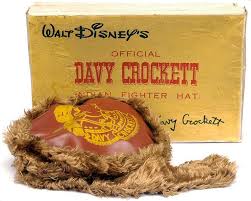 It was during his time as a contract player for Disney that he appeared in Old Yeller, but he grew dissatisfied with being typecast and with repeatedly being asked to take small, non-starring roles, so he left Disney in 1958.

One of his notable roles during this period was the title part in a 1962 series based on Mr. Smith Goes to Washington. This is wonderfully fortuitous casting. If Parker’s acting chops aren’t up to Jimmy Stewart’s, he is without a doubt the right type to a T. (Interestingly, Davy Crockett had been a Congressman. The concept of playing a simple, honest country man who must confront the cynical sophisticates in Washington was not a new one to Parker).

Ironically, his next iconic role was to be so similar to his first one that he may just as well have remained working for Disney. In 1964 he was cast as the title character in the series Daniel Boone, attired in nearly the same costume, and put in the same setting, log cabins in the Tennessee/Kentucky frontier. I was in the first grade when the series went off the air in 1970; I still remember the theme song after all that time. It was a very popular show, as its six year run testifies.

But by 1970, tastes were rapidly changing. In the late Vietnam era, westerns were dying faster than the buffalo. Parker would have to reinvent himself if he wanted to remain in the game. Astoundingly, he turned down a perfect chance to do just that. In 1970 he was the first choice to play the title character in McCloud, the NBC police drama about the culture clash that arises when a New Mexico marshal is loaned to the New York City police department. Along with Columbo and McMillan and Wife it was one of the shows presented in rotation on the NBC Sunday Mystery series, which would prove a blockbuster success, and the role of McCloud would have been perfect for Parker, casting him as a rustic type thrust into the modern world. But Parker passed, and the role went to Dennis Weaver, who had earlier achieved stardom on Gunsmoke.

In 1974, he made a pilot for The Fess Parker Show, in which he played the harried dad of “three feisty daughters.” It was not picked up. He retired from show business after that. He went on to found the Fess Parker Winery (and Coonskin Cap Store), which was used as a location in the movie Sideways. And he invented that new soft drink: “Fess Up” (kiddin’!)