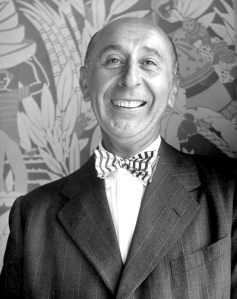 Thanks to the still thriving chain of dance schools, the name Arthur Murray remains nearly as famous as it ever was. Certainly more famous than Moses Teichman, his given name. Murray (1895-1991) is a somewhat anomalous figure because he wasn’t a performer per se, purely an instructor — and an instructor of social dance at that, as opposed to show dancing. I’ve had little motivation to include him in these annals until a few months ago, when I was re-reading The Groucho Letters, and realized that Murray and Groucho had been friends. Murray had a TV show at the same time as Groucho and the two compared notes. Murray was a genuine pop cultural phenomenon, if an odd one, more along the lines of guys like Lawrence Welk and Marlon Perkins and Carl Sagan than an actual song-and-dance man himself.

As a young man, Murray had studied ballroom dancing with Vernon and Irene Castle. But he also took business classes, worked as draftsman, and as a journalist. His bent was more entrepreneurial than expressive. He competed in dance contests and began to teach classes rather than attempting to break into show business. His skills as a draftsman came in handy when he hit on the idea of using footprint shapes to diagram dance steps. Initially these were used in combination with gramophone record albums to teach classes via mail order business. In the ’20s the empire expanded to radio. And then he began to sell franchises, a business model unlike that used by many fast-food chains today.

The dance charts were a craze for a long while, and Murray became a pop culture figure. He even dabbled in films. In 1926, he produced, wrote and directed an instruction film about how to do The Charleston (a particularly interesting venture since it was a silent film). And he appeared as himself in three films: The Big Apple (1937), Swinguette (1939), and Jiggs and Maggie in Society (1947). 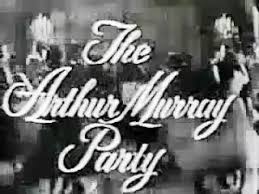 In 1950 he and his wife, dance partner, and business partner Kathy, launched The Arthur Murray Party. This highly original TV show was formatted like an actual party, co-hosted by the Murrays, featuring dance instruction and demonstrations, along with celebrity guests. Repeat visitors to the show included Bert Lahr, Arnold Stang, Merv Griffin, June Havoc, Ricardo Montalban, Joey Bishop, Paul Winchell, Billy deWolfe, Jack Norton, Eva Gabor and Pearl Bailey. The show was one of a very few that had a turn on all four networks of the day: CBS, NBC, ABC and Dumont.

The Arthur Murray Party ended in 1960, and not because of rock and roll. The Murrays had actually had rock acts like Buddy Holly on the program. His show was clearly a precursor to everything from American Bandstand to Soul Train to Dance Fever. It’s just that by 1960, Murray was 65 years old. Time to retire! And don’t forget, he himself danced on every show. Little did he know he was going to live another three decades!