My readers undoubtedly know this particular biography better than I do. I post it solely in honor of Gypsy’s birthday.

At first Rose Hovick placed her hopes and dreams on her younger daughter June, who had a kid act called “Daisy Jane and her Newsboy Songsters”. At age 13, June eloped and left the act (going solo and renaming herself June Havoc even though punk rock wouldn’t start for another 45 years). So the older daughter Rose Louise, who had always been a supporting player, was drafted to be the center of the act, now called “Rose Louise and her Newsboy Songsters”.

From here the act got more grown up. As vaudeville died and bookings became impossible, and as Rose Louise, blossomed into womanhood, the act sank into burlesque, becoming Rose Louise and her Hollywood Blonds. By age 17 was a headliner with Minsky’s. Smarter and classier than a lot of the woman around her in burlesque she managed to distinguish herself by hanging on to her integrity. She never did actually strip – merely worked her audience into a frenzy with the subtle art of her movement, which was not vulgar, but more suggestive, in the fashion of a Hollywood movie star. Because she had the last laugh, outsmarting both puritans and pornographers she remains a hero to a lot of people to this day. She also managed to land a lot of “legitimate” work, unavailable to some of her more compliant coworkers. For example, she performed in the 1936 edition of the Ziegfeld Follies, as well as the Broadway shows Ali Baba Goes to Town (1937), and My Lucky Star (1938). In 1939, she headlined at the New York World’s Fair. In later years, she wrote novels and plays, acted in films and on television. she passed away in 1970. Her sister June was in the 1997 PBS documentary Vaudeville — impossibly youthful and charming for a woman in her 80th year. 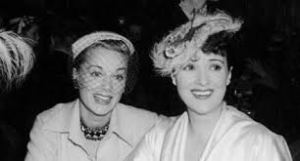 Here’s a clip of Gypsy in action in the 1943 wartime film Stage Door Canteen, performing a sort of parody of her normal burlesque routine:

To find out more about vaudeville including Gypsy Rose Lee and June Havoc, consult No Applause, Just Throw Money: The Book That Made Vaudeville Famous, available at Amazon, Barnes and Noble, and wherever nutty books are sold.