One of the questions I get asked most from readers and folks who attend my talks is “What’s the difference between Vaudeville and Burlesque?”

The short answer is that Burlesque is Vaudeville’s “Evil Twin”. The two forms were hatched in the same place at the same time (19th century America) by largely the same people, but whereas Vaudeville presented many more diverse types of acts, which were for the most part “clean”, Burlesque focused on beautiful females who sang, danced, and clowned (and in later years stripped), along with a company of musicians, and low-brow comedians. Sometimes the girls would incorporate vaudeville skills (magic, juggling, a musical instrument) into their routines as gimmicks. Sometimes the occasional act of another type would creep in (e.g., strong men, female impersonators, et al). But where Vaudeville was designed specifically to appeal to women and children as well as men, and was thus deemed wholesome; burlesque simply doubled down on the entertainment needs of rowdy men.

“Burlesque” is one of those fuzzy words, as fuzzy as a feather boa. It’s really only the theatre historian or buff who cares about its many diverse definitions. But I assume you’re one of those, so I’ll share them with you. 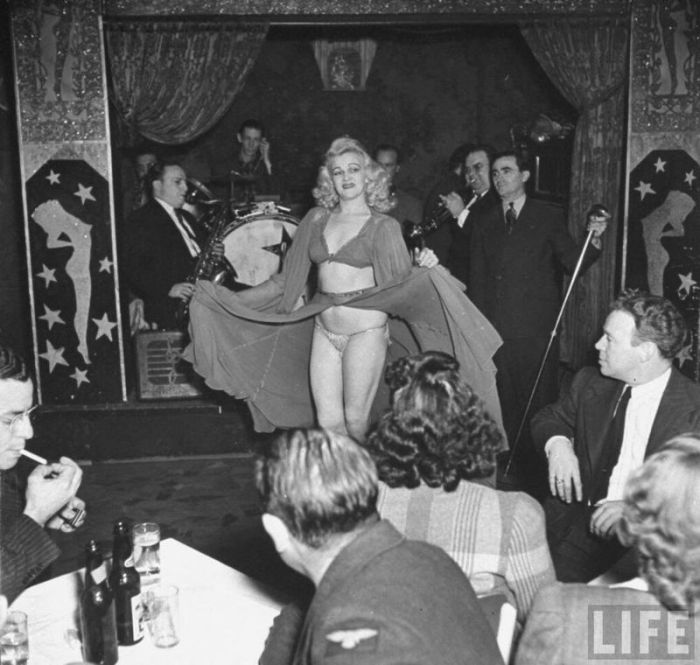 First, let’s talk about what I assume most people mean and think of when they say “Burlesque”. The vision in my head: a cocktail bar or very small night club. A corny, slightly off-color comic is the host. There is a very small jazz band containing perhaps a piano or organ, a saxophone and a drum kit, playing something like the 1962 hit record “The Stripper”. The drummer works the tom-tom like crazy as a succession of girls in classy evening clothes “take it off”.  I think this is the classic Burlesque image, and it’s mostly I think what most contemporary neo-Burlesquers are trying to evoke in their work.

This snapshot is of the scene roughly as it existed from the World War II era through the 1960s. It’s the era represented by the remaining old timers in Leslie Zemeckis’s excellent film Behind the Burley Q. (“Burley Q” is of course what “Burlesque” sounds like when you pronounce it in its original language, French). This era died out in the late 1970s when more lenient laws (and enforcement thereof) allowed the smut industry and topless bars to overtake it. (By the 1970s, no one bothered stripping anymore. Men went into bars to find already topless women go-go dancing to records. This is the crack cocaine of the art form; the form in its decadence and well past its prime).

Interestingly, this  faux “classic period” we speak of is actually the chapter that happens AFTER the period considered classic by serious showbiz historians and buffs. The actual classic burlesque era is the period that ended abruptly in 1938 when Mayor Fiorello Laguardia cracked down on New York’s Burlesque scene. In those days Burlesque was frequently getting raided, but had also achieved a high level of respectability. By that point that two Broadway theatres were devoted to Burlesque, and the shows were so lavish they featured large companies of chorus girls and entire pit orchestras. It’s the era of Gypsy Rose Lee, glimpsed accurately in the film Lady of Burlesque. (Interestingly, the musical Gypsy which is set during the time period of the 1920s, to me is more evocative of its OWN era, which was the late 1950s). It’s also the era of the Burlesque comedy sketches and its comedians like Abbott and Costello, Bert Lahr, Phil Silvers, Pinky Lee, Joey Faye and Rags Ragland.

While it’s easy to say when this period ends, it’s impossible to say where it begins. It came into being in stages.

One of its ancestors (in a lineage that has largely been disowned) is, believe it or not Aristophanes. This is why we have the odd phenomenon of this art form of half-naked dancing girls possessing a name that also means “parody, satire, travesty, spoof”. Aristophanes is the father of plays that poke fun at other plays (and also society). Long about the 18th century, the form became popular again (Fielding wrote some “burlesques” that I know of). In 1868, a play of this type called Ixion, which tweaked  Greek myths, came to the U.S., starring Lydia Thompson and her British Blondes. In this production apparently lay the germs of what we consider modern Burlesque. There is naturally no film record, so we must rely on the critics of the time who wrote disapprovingly of “free and suggestive manners”, “leering at the audience” and the like. The go-to guy on all things Lydia Thompson and Ixion is Albert Garzon. See his blog here. 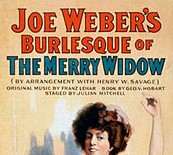 But I must take a moment and say I’m rather partial to this Burlesque stepchild, which surfaces on stage and screen periodically. Notable purveyors included Weber and Fields (who devoted an entire Broadway theatre to it). More modern masters of the form have included Charles Ludlam and his Ridiculous Theatrical Company, and Mel Brooks. (I think of Blazing Saddles especially as an example of how both sides of Burlesque, the parodistic and the va-va-voom, can mesh). At any rate, my enthusiasm for this form is one of the reasons I call myself Trav S.D. (“travesty”) and I’ve done many such plays over the years myself.

But for the most part, this side of Burlesque dropped out in the very early 20th century. As we have seen, comedy remained very much a part of Burlesque, but it is more of the short blackout sketch variety with lots of eye-winking and double entendre. Burlesque is about sex. Hence other immediate antecedents to Burlesque per se in the mid 19th century included, believe it or not, ballet (which shocked Victorians by presenting very simply clad, freely moving females), and the concert saloon, with its hordes of so-called waiter girls and can-can dancers, familiar to anyone who has ever watched a Western.

Around 1870, a man named M.B. Leavitt pioneered large scale organization and the creation of a burlesque industry, putting together lucrative tours of Burlesque shows. At the same time, the form was stealing its format from the then popular minstrel show, becoming now a variety show, instead of a musical play.

The last link in the chain: the introduction of the strip. This came about gradually, starting with the popularity of the hoochy cooch in the wake of Little Egypt’s demonstration at the 1893 Chicago World’s Fair. It was natural for this beguiling dance style to wend its way into burlesque, although stripping all the way did not really happen until the 1920s — which is what prompted LaGuardia’s crackdown.

Thus, for most of its existence, the performance specialty we associate MOST with burlesque was NOT part of burlesque per se. This makes it very hard to convey to people what burlesque WAS. After all, if not stripping, what was it? Well, you have to remember that these were Victorian and Edwardian times, when women’s fashions meant dresses that nearly went all the way down to the ankle. So what scandalized people back then was far less than what would ever shock people today. The shows were much more like what we think of as musical comedies. “Revealing” women’s skirts  came down to just below the knee, allowing glimpses of stockinged legs and bloomers (no bare legs). Prior to the age of the striptease, THIS was the raciest kind of thing you’d be likely to see at a burlesque show, and it was considered very dirty: 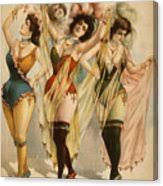 Basically, women in what amounted to underwear was considered naked. Songs, scripts and comedy routines might have eye-winking double entendres, but nothing graphically crude by our standards. “Suggestiveness” was considered vulgar enough. And there were just lots of painted ladies — chorus lines fill of them, and then ones doing specialty acts. Men got to look at MANY women, and getting to stare at women — clothed women — was ENOUGH.

Until it wasn’t. Movies and the Depressions cut into burlesque audiences. The shows got hotter, and began including stripping. Then the circuits died, and all that remained were “strip joints” hither and yon in most major cities.

At any rate, Burlesque, like Vaudeville, and Old Time Radio, was dead by the second half of the twentieth century. Then, as a new century approached, it came back.

I first presented Burlesque acts in my American Vaudeville Theatre in 1997. For a movement that is putatively considered to have started in the mid 90s, this was very early indeed if I do say so myself, and certainly scads earlier than almost everybody operating on the scene today. The true pioneers were Velvet Hammer Burlesque in LA, which really started the classical burlesque movement, founded in 1995. Uta Hanna’s Blue Angel in NYC had started in 1993, but was really more allied with the contemporary pole dancing thing. I only went there once, saw that it was very much about getting lap dances in booths, and ran out with the speed of 10,000 Gilligans. And Dick Zigun of Coney Island USA says he has been presenting burlesque there since the 1980s, and who am I to argue? Now, I know the Bindlestiffs got the idea before me, because I stole the idea — and the dancer — from them. It was Miss Bonnie Dunn, who now runs Le Scandal. Here’s a snatch of a 1998 performance she did for me at Surf Reality:

Bonnie, Dirty Martini (whom I first presented in 2001), World Famous BOB (ditto), and Kate Valentine (ditto) and Murray Hill, Angie Pontani, Jo “Boobs” Weldon,  and another couple dozen or so are among the few who have any true street cred in this field, all having there since the 90s (and some even before that).  All those who came later are essentially party crashers. I grant that I’m one of those party crashers, but I think I can boast that I am one of the first of the party crashers. At this writing I have been presenting the odd burlesque act, and producing the odd burlesque show, for over 20 years.

To learn more about vaudeville and burlesque, consult No Applause, Just Throw Money: The Book That Made Vaudeville Famous, available at Amazon, Barnes and Noble, and wherever smutty books are sold.