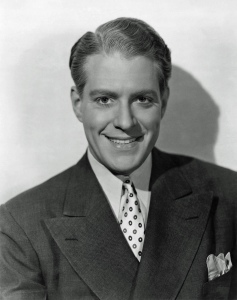 I regret to report that Nelson Eddy (1901-1967) is not what you get when you cross Duane Eddy with Nelson, ‘cuz that would be a mighty cool music act. I have been remiss in not posting about my fellow Rhode Islander to date. I wrote about his frequent screen partner Jeanette MacDonald several years ago, but she had some background in vaudeville, which was the original core bailiwick of Travalanche. Eddy came to Hollywood by way of a different ladder, but we’ve had several occasions to mention him here, so it seems like high time to give him some attention.

Both of Eddy’s parents and his maternal grandmother sang in church. The father was a machinist who sometimes worked as an opera stagehand in Providence, and performed in amateur productions of Gilbert and Sullivan. But he was an alcoholic. The family moved around among Southern New England cities (Providence, Pawtucket, New Bedford) as the dad was in and out of work. Finally, he walked out on the family when Nelson was a teen. Nelson was forced to drop out of school and move with his mother to an uncle’s house in Philadelphia. Nelson worked at a plumbing supply company, before securing work as a cub reporter at several Philly newspapers. Like the rest of his family, he began singing in church, amateur opera and social gatherings. By the mid ’20s he had graduated to professional opera and radio. By 1931 he was singing at Carnegie Hall.

As his viability as a movie star diminished Eddy worked increasingly in radio, making hundreds of appearances on shows like The Chase and Sanborn Hour, Kraft Music Hall and Lux Radio Theatre. Television work followed throughout the 1950s and ’60s, on programs like The Alan Young Show, The Colgate Comedy Hour, The Bob Hope Show, The Ed Sullivan Show, The Jack Paar Tonight Show, The Spike Jones Show, The Danny Thomas Show, The Merv Griffin Show, and The Mike Douglas Show. Guy Lombardo’s 1966 New Year’s Eve show was his last TV appearance.

Between TV appearances, Eddy’s meat and drink through his last years was the concert circuit. He died onstage in March 1967 while performing at the Sans Souci Hotel in Palm Beach. And, my friends, I can’t think of a better way to go.

If scandal is your thing, the rumor of a serious, long-term serious (extra-marital) relationship between Eddy and MacDonald has been reliably investigated…and was apparently quite true. What are you waiting for? Go, go! The internet awaits!

To learn more on show business history, please see No Applause, Just Throw Money: The Book That Made Vaudeville Famous.