Though I Didn’t Come From Vaudeville, I Did Come from This

One of the questions I have been frequently asked in the context of having written No Applause is “Did you have relatives in vaudeville?” and my usual answer is along the lines of , “No, other than myself, I have no connection to show business.” But that’s not quite true. My brother Larr Anderson is a musician and I’m certain a good portion of my love of show business rubbed off on me from him. He’s best described as a raconteur — always full of hilarious stories of his experiences (old ones and new ones), and jokes he heard from other performers while working in clubs and bars. It was glamorous and exciting to me as a kid, and his stubborn pursuit of his own dreams was an undoubted model for my pursuit of mine.

I’m from Rhode Island; our local cultural center was Providence, and with the fullness of time I can see how its local show biz culture influenced me as a teenager. In the ’70s, Providence, like most small New England cities, was trapped in the past, if only for economic reasons. The industries that had made these towns hum early in the 20th century had fled. New things were not being built; sometimes at night the streets looked deserted. In some ways, it could be depressing, but it also gave a town like Providence a kind of funky retro chic. It looked trapped in the 1940s or ’50s. Its largest landmark (now called 111 Westminster) was an art deco skyscraper built in 1928, colloquially known as “the Superman Building” because it resembled the one George Reeves flew over in the ’50s television show. It was a gritty noir town, full of diners and lunch counters and dive bars and mafia hoodlums.

Some of its aesthetic crept into New Wave music, I think. Local artists throve on vintage culture; old threads from consignment shops, and self-consciously kitschy home decor. The best known exponent of this culture is The Talking Heads, three of whose members met at the Rhode Island School of Design (RISD) and played locally as “The Artistics” in 1973 before moving to NYC.

Also from the RISD scene in the ’70s was Charles Rocket, best known today for being fired from Saturday Night Live in 1981 for uttering the word “fuck” on national television. (This despite his being the most popular cast member of the first season following the departure of the original cast; he was touted as the “new Chevy Chase“.) Rocket later had prominent roles in films like Dances with Wolves and Dumb and Dumber. He originally fronted and played accordion in a Providence band called The Fabulous Motels. Rocket’s frequent partner in crime was a painter and performer named Dan Gosch. (The two were known for staging protest publicity stunts at the State House dressed as super heroes.) Gosch painted a locally famous mural of weird faces at a bar/restaurant called Leo’s, where I later worked my way through theatre school as a dishwasher.

Another hugely influential local phenomenon was a band called The Young Adults. My best friend’s cousin Ed “Bumpsy” Vallee was its guitarist, and another of their line-up Thom Enright was a close friend and frequent band-mate of my brother’s, so I got to hear The Young Adults’ satirical set a lot, and their funny songs like “A Power Tool is Not a Toy”, “Fallen Arches” (about an explosion at McDonald’s) and their best known song “Complex World” (which later became the title of their 1992 movie),  definitely influenced me as a songwriter. Their best known member David Hansen (a.k.a. “Sport Fisher” — for whom a sandwich at Leo’s was named) left shortly after the band started to gain some momentum and formed Cool it Reba (named after a remark frequently uttered by Soupy Sales) in New York. The other key member was a character named Rudy Cheeks, probably the biggest local star, a hustler who not only fronted The Young Adults but wrote a funny column in the New Paper (later known as The Providence Phoenix) called “Phillipe and Jorge’s Cool, Cool World” and screened B movies while making wisecracks into a microphone, decades before Mystery Science Theatre. Rudy writes about his memories of how all these players (Talking Heads, Fabulous Motels, Young Adults and others) overlapped and interacted here.

Martin Mull is also a comedy/musician who came out of the RISD scene (he studied to be a painter), and whose path crossed many of those on this page, although he quickly moved to Boston, and then the world, after graduating. There’s a great article about his early years here.

Another key artist to emerge from this scene (possibly even better known in some quarters than David Byrne and Talking Heads) is Brenda Bennett, of Vanity 6 a.k.a. Apollonia 6, one of Prince’s many side projects, whose day in the sun was the mid 80s. The attached article mentions two of my brother’s pals and bandmates Phil Green and the aforementioned Thom Enright as key people she met and played with early in her career. Enright had also played with Beaver Brown, which achieved mainstream success in the mid 80s with the song “On the Dark Side” and the Eddie and the Cruisers soundtrack. To my amazement, the article also mentions that her brother, along with the above mentioned Ed Vallee of The Young Adults were in the band Universal Rhundle together. My brother had mentioned this band to me when I was a kid. It became the inspiration for this play of mine.

My brother is a drummer who has been playing professionally since he was 11 years old. We wrote a little about here about how he knew folksinger Patrick Sky in his younger years (Sky started a coffeehouse in our hometown). Another early cohort (who designed psychedelic light shows) was Dennis Nagle, who passed away in 2020 of Covid-19, as chronicled in this New York Times article. I was in a band called the Happy Machines (mentioned here) with Dennis’s son Alex in high school. I was definitely inspired my brother. My brother played in all kinds of bands over the years, but the strongest thread was his participation in the blues revival of the 1980s. Roomful of Blues is one of the best known local bands in that movement; they were formed in Westerly, Rhode Island, where I was born. My brother has sat in with them and played in many bands with their guitarist Chris Vachon, including his current one Li’l Shaky and the Tremors (see bottom of this post for an important update!) Roomful’s bassist Preston Hubbard also played with the better known Texas band Fabulous Thunderbirds, which was part of the same national movement. My brother also played in a trio with Duke Robillard, best known as a member of the original Blues Brothers line-up before quitting in disgust (or being fired for mouthing off, depending upon who tells it). 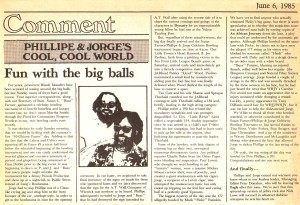 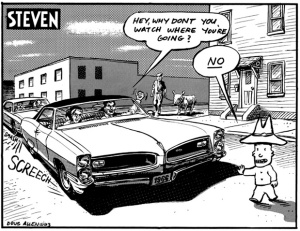 As a kid, I was often taken to bars and clubs to see my brother play (things were more relaxed then) and once I even got to hang out in a recording studio and watch him and his friends record a single. But for the most part, in my little seaside hometown, I was far from the action. The above-mentioned New Paper was one of my lifelines. It was the equivalent of our local Village Voice. In addition to Rudy’s column, it carried Doug Allen’s deadpan comic strip Steven,  and, unless I misremember, also Feiffer, Bill Griffith’s Zippy the Pinhead, David Lynch’s Angriest Dog in the World and Ben Katchor’s Julius Knipl, Real Estate Photographer — although some of this may be bleeding into my memories of my first days in New York and the Voice itself. The New Paper featured left wing writing on local politics and reviews and ads for local bands like (in addition to those named and others I will name) Throwing Muses and Steve Smith and the Nakeds.

Another of my lifelines was Brown University’s fm radio station WBRU. They played mostly dinosaur rock, but I especially lived for the weekly show of one “Dr. Oldie, the Dean of the University of Musical Perversity”, who spun mostly singles from the 1950s, often very obscure and strange ones, not the usual hits. I learned to my shock just now that he is the same guy as John Peck…aka, The Mad Peck, the co-author/illustrator (with the fascinating Les Daniels) of the seminal, groundbreaking book Comix: A History of Comic Books in America, as well as the famous Providence poster:

A terrific article in the Providence Journal here about Peck and his interactions with many of the above-named players.

The local band (outside of my brother’s influence) I followed most closely was the neo-psychedelic outfit Plan 9, whom I got to know from my friend Colin Cheer, who took guitar lessons from their leader, a scary-looking dude, with a wild, frizzy mane of hair named Eric Stumpo (yeah I know that’s bad grammar — fuck you). Through Plan 9’s influence, I discovered ’60s garage rock of the proto-punk variety…not to mention the film for which the band was named, Ed Wood’s Plan 9 from Outer Space. Colin introduced me to all the punk music going up until that time 1982-3-4. But I liked 60s’ garage rock more, which is why I remain well versed in punk only up until the early 80s…I know very little of what came after. Colin, me, and our friend Alex Nagle briefly had a band called the Happy Machines. I played drums on a make-shift kit made up of my brother’s castoffs. We only played a couple of gigs — we chased most of the audience away. But Alex later joined Plan 9, which was quite a step up. We weren’t close but Colin was a big influence on me when I was about 17. One cold winter night we spent the entire evening running around the streets of Providence. He took photos; I wrote a play based on some characters I witnessed. Dysfunctional Theatre presented it a few years ago, I call it The Big Donut. Later I slept on Colin’s sofa in Boston on one of my first attempts to leave the nest when I was about 19. (I have one very cool anecdote of that experience, but I may have to fictionalize that one).

One other Providence name I want to drop. Janeane Garofolo did her first stand up dates at Periwinkles Comedy Club in the Providence Arcade when she was a student at Providence College in the mid ’80s. I’m almost exactly the same age and performed there at around the same time. When I saw this mentioned in the book We Killed a light dawned: “Ah!” I think we may have performed on at least one bill together.

At any rate, working on this piece has been a revelation for me…comedy and music are the most important parts of show business to me (even better when they’re mixed), and I am also pretty obsessed with vintage pop culture. It’s pretty clear that I am a product of Providence, that the roots of No Applause are in the culture of Providence, and my gateway to that was my brother Larr. 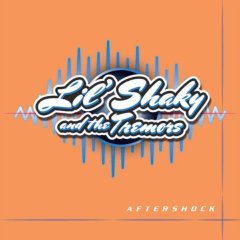 And, now after all that lead up, an old fashioned plug. My brother’s band Li’l Shaky and the Tremors, led by Chris Vachon of Roomful, has a new album called Aftershock, released by Alligator Records. Guest artists on the record include Brenda Bennett of Vanity 6 and Ed Vallee of the Young Adults! It features ten vintage rhythm and blues covers and is a great illustration of what these guys have been doing all their lives. You can get it here and I hope you do!