On the Peculiar Genius of Ed Wood 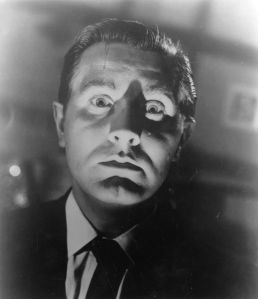 A number of years ago I was fortunate enough to take part in the Ed Wood Festival produced by Ian Hill and Frank Cwiklik and their respective theatre companies (GeminiCollisonworks and DMTheatrics). I was overjoyed to be able to do so, having been a member of the Cult of Wood since the very early 90s, when I was introduced to Wood’s work by my psychopharmacologist and pedicurist Robert Pinnock. (Prior to Pinnock, I’d only really known about Plan 9, because it was the name of a garage band in Rhode Island.) To those only familiar with the 1994 Tim Burton bio-pic, Wood’s oeuvre includes not only the notorious Glen or Glenda (1953), Bride of the Monster (1955), and Plan 9 (1959), but also the unreleased sequel to Bride of the Monster, Night of the Ghouls (1959) which features a character named Dr. Acula (more about Wood’s horror films here); as well as scripts for Jail Bait (1954), a hoodlum plastic surgery yarn; The Violent Years (1956), a juvenile delinquent picture about an all-girl gang; The Sinister Urge (1960), a fairly disingenuous expose of a pornography ring (given that porn was to be Wood’s bread and butter in later years); and Orgy of the Dead (1965), a nudie cutie and horror hybrid, which I helped adapt for the stage about ten years ago.  And much much more for those depraved enough to dig deeper. For my more in-depth post on the horror films of Ed Wood, go here.

My colleagues and I have had many a discussion on the silly topic of Ed Wood, and there’s an attitude about him and his work I believe we all share. All of us, at some relatively early stage, moved BEYOND a mere scoffing at Ed Wood’s ineptitude as a film-maker (which, don’t get me wrong, is near total in every conceivable way) to an APPRECIATION for the virtues he possesses. Anyone can laugh at something “bad.” And I assure you, I continue to howl all through Wood’s films, and to quote his terrible lines, and to impersonate his terrible actors. I must, or I wouldn’t have watched these films dozens of times.

And this is the crux of it. Something about these films compelled me to watch them dozens of times. And not just me, but many strangers from around the country – as though we all had the Close Encounters tune planted in our heads. I’ll be damned if I know what it is. I do think Wood is very good at conjuring up an atmosphere. I also think that since HE was such a huge film fan, he was able to transcend his ineptitude by conjuring countless visions planted in the collective unconscious by the Hollywood dreamsmiths: Bela Lugosi, Vampira, Tor Johnson, flying saucers, mad scientists, noir era hoodlums and gangsters. They don’t have to be in any plausible story, what they say doesn’t have to make sense – they just have to be there, as though someone had thrown some comic books, Universal horror posters and 45 rpm records into a blender and made movie slaw. And that’s kind of how dreams are, isn’t it? And, probably most important of all, Wood went at it with heart, with an absolute, vulnerable assurance – a vision – that every choice he was making was the right one. He believed in it. Belief – in this cynical world – is a rare and beautiful thing. And that virtue – that simplicity – in Wood’s films is to me a superior quality to the impulse to ridicule somebody else for some obvious but harmless fault.