Joan Crawford: From Sexpot to Psychotronica

To be born in the modern age is to discover many of the great figures of past ages backwards. We encounter them by reputation or in classrooms and we usually are introduced to them at their peak or in their maturity. As opposed to our ancestors who grew up with these figures and watched their lives and careers unfold in real, forward moving, chronological time.

Joan Crawford (ca. 1904-1977) was in the midst of retiring from picture-making just as I was becoming fully engrossed in Captain Kangaroo. Furthermore, she is best known for what used to be called “Women’s Pictures” — delaying any real interest on my part for decades. Some males go to their graves successfully avoiding submitting themselves to such melodramas their entire lives, and quite happily. It’s no accident that the first Joan Crawford movie I ever saw was a western, the all-butch-lady showdown picture with Mercedes McCambridge known as Johnny Guitar (1954). I had to have been in my late twenties by then. I’d seen scores of movies starring other classic Hollywood stars by then. But not Crawford.

But I did know about her. You could say that my first “encounter” with Crawford, as it was for many people my age, was at second and third and fourth hand in the form of the world’s first psycho-biddy bio-pic Mommie Dearest (1981). This naturally led to awareness of “middle period” Crawford, the iconic Mildred Pierce era persona. When you think “Joan Crawford”, I imagine that’s the incarnation most people think of. 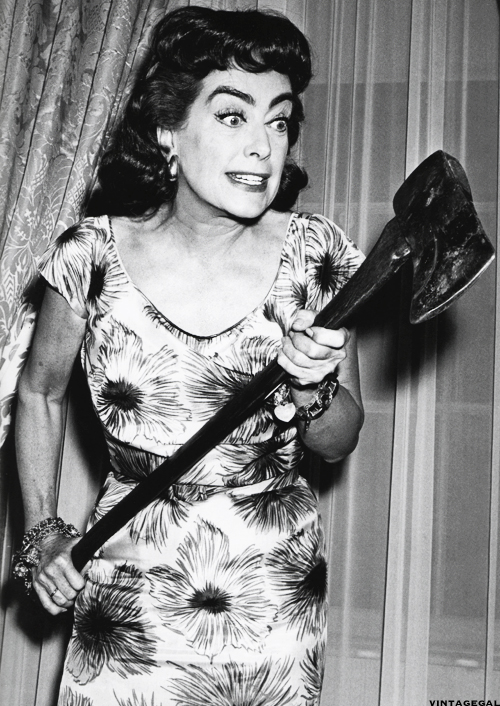 But the monstrous campy child-beating monster Crawford we meet in Mommie Dearest leads inexorably to an exploration of LATE career Crawford, her horror phase, (mostly in the mini-genre uncharitably referred to by some as “psycho-biddy”) starting with the best known of these Whatever Happened to Baby Jane? (1962), and including The Caretakers, in which she played a sadistic madhouse nurse (1963), Straight-Jacket (1964), the Hitchcock-esque Della (1964), I Saw What You Did (1965), Berserk (1967), Eyes (her 1969 Night Gallery episode directed by Steven Spielberg) and the hallucination inducing caveman-exhumation flick Trog (1970). Thus the Joan Crawford I came to know best first was a kind of grotesque freak show version, a warped parody of whatever star she had originally been. We wrote about several of these pictures here.

Over the years I also managed to fill in the middle period, the ’40s and ’50s, the battle ax years, when we often catch remnants and intimations of the great beauty she had been, but there is also a sort of steam-roller quality and a mannishness not unlike that of some of her contemporaries, like Rosalind Russell — all furry eye brows, handshakes, and padded shoulders. This period starts with a couple of (uncharacteristic) comedies, The Women (1939) and Susan and God (1940). I’ve also seen Strange Cargo (1940), Mildred Pierce, Possessed, which paves the way for the craziness of the late period (1946), Flamingo Road (1949), Harriet Craig (1950), Sudden Fear (1952), Johnny Guitar, Autumn Leaves (1956), and The Story of Esther Costello (1957). These movies, too, are all a sort of confirmation of what we gather about her movie career from Mommie Dearest; an aging beauty, usually pretty intense and crazy, sometimes dishing out the terror and antagonism, sometimes being on the receiving end. You don’t tend to see her playing Madame Curie.

Still, something major was missing: a good third of her career. You hear it alluded to in Mommie Dearest and in other whisperings of the Crawford legend. And what you hear, based on what you know from the latter two-thirds, you don’t quite believe. And that’s this hard-to-credit, EARLY phase when she was one of the very top stars in Hollywood and a legendary beauty and vamp. Somehow one never SAW those movies, so talk about them was just so many words. But in the last few years I’ve managed to catch many of them on TCM. I’m not sure I ever would have got around to them, but the Mad Marchioness made a special point and I am grateful, for they were most illuminating. They are mostly films from the silent and pre-code eras at MGM.

I had seen one her earliest films Tramp Tramp Tramp (1926) with Harry Langdon many years ago, but this isn’t too educational. She is the leading lady (barely into her twenties) but she scarcely seems herself at all. She hasn’t yet acquired much personality or sex appeal. And she also stars in Tod Browning’s The Unknown (1927) with Lon Chaney, and that too I had seen.

But that’s not what everyone is talking about. Young Lucille Leseuer (her real name) had been a dancer and chorus girl, and it’s roles that showed her off in THAT context that made her a star as one of the key Jazz Age movie flappers in pictures like Sally, Irene and Mary (1925), Paris (1926), The Taxi Dancer (1927), Our Dancing Daughters (1928) and Our Modern Maidens (1929).

Then come talkies. In Untamed (1929) she plays a wild girl from South America. In Montana Moon (1930) a party girl socialite who must be “broken in” by her cowboy husband. Our Blushing Brides (1930), and Dance, Fools, Dance (1931) revisit themes of her most popular silents.

Quite naturally she’s in the ensemble picture Grand Hotel (1932), that was one of the first of these I’d seen, as was her unfairly maligned performance in Somerset Maugham’s Rain (1932).

There’s a bunch more like this. I’ve seen about a half dozen others, usually with Clark Gable or Robert Montgomery as her co-stars and she’s usually either a dancer or a secretary and the stories are racy and involve infidelity, or money schemes, because it’s before the implementation of the Production Code.

These early movies fill in a vital piece of the puzzle. Crawford started out her career as a straight-up cinematic object of desire. Familiarity with the Siren she once was sheds light on the numerous husbands, the countless romances with co-stars and others, and her legendary negotiating prowess on the casting couch. (Some of have suggested an arrest record for prostitution, as well). Later, when year by year that part of her appeal drains away, she seems to be compensating, like you do when you limp. Her intensity becomes such that she seems almost to be trying to draw people to her with her STRENGTH, with her MENTAL POWER, with her WILL, with something. It’s kind of Norma Desmond-y, and any way you slice it the resemblance is not an irrelevant coincidence.

We watched Jessica Lange’s portrayal of her on the FX show Feud: Bette and Joan now with great interest. An unusual beauty herself (she still is!) Lange seems to grasp this aspect of Crawford’s motive power, and many other subtle things, including the very careful self-taught diction. Young Lucille had grown up in Texas, Oklahoma and Missouri, you see, and originally had a regional accent, which she lost through application and hard work…like everything she did.

And so you see we have worked our way backwards to her origins. Today is her birthday. Wherever she is, I bet she’s limiting herself to two bites of cake.

(P.S. Another midwife for my appreciation of Crawford has been friend Lance Werth, who actually MAJORED in Crawford at college, and writes the terrific blog Lance’s Werthwhile Classic Movie Diary. He wrote this appreciation of the star there as well).