The Marx Brothers: The Chico Years 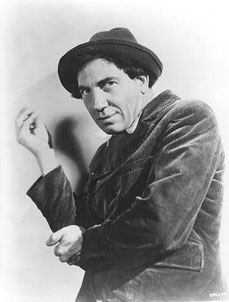 Time once again to celebrate the birthday of Leonard “Chico” Marx (1887-1961). Today seems to me an appropriate time to float a notion I came up with the other day, a way of looking at the Marx Brothers films of the much-maligned MGM period (1935-1941.)

I hasten to point out that in no sense do I claim the ideas I am submitting are a real thing. They constitute a theory, not a thesis. It may be a useful lens for trying to understand these somewhat unfathomable years, when the team seemed to jettison the essence of what had defined their characters and comedy for most of their careers (around a quarter of a century) and to change into altered personas in new kinds of vehicles that didn’t suit them as well.

We begin with the observation that a shift in cultural taste was occurring in the late 1930s. Whether the shift was initiated by audiences or producers, or both in tandem, is unknown and maybe unknowable, but what we observe across the popular arts (movies, theatre, pop songwriting), is a movement away from the aesthetics of vaudeville (formal, stylized, artificial, surreal) and closer towards realism (literal, logical, comprehensible). I see several possible factors at play: a) the death of the big time vaudeville circuits in the early 1930s; b) the popularization of talking pictures — the most accurate method of recording reality in history — starting in 1927; and c) the advent of radio, a medium that also exposed audiences to reality, in the form of extemporized performance.

Tastes seem to become more prosaic and less “smart”. Fantasia, clown make-up, verbal wordplay pass from the scene, to be replaced with plausibility and relatability. If Clark and McCullough and Wheeler and Woolsey represent the early ’30s, Bob Hope is the face of the end of the decade. He makes wisecracks but they are not TOO crazy. He’s a little goofy but not TOO strange-looking or acting. At the same time, there appears to be a trend away from the verbal, word-based joke (Burns and Allen) to those which de-emphasize The Word and replace it with, for lack of a better word, Funny Faces (the Three Stooges, the Ritz Brothers, Abbott and Costello). Settings for stories become less whimsical (Klopstokia) and more quotidian (a night club).

Amidst this time of transition, the Marx Brothers began the second phase of their movie career. The earlier, Paramount films (1929-1933) stuck to a formula consonant with their vaudeville and Broadway successes, highly surreal in character, and dominated by Groucho and Harpo. In 1935, through the influence of Chico, they signed with MGM, whose production head Irving Thalberg preferred to stress the importance of story. But it wasn’t until after his death in 1936 that the zeitgeist seemed to overwhelm the team’s natural voice. And this is what I am calling “the Chico Period”. By using that term, I don’t mean that Chico is now suddenly the star of these pictures (A Day at the Races, At the Circus, Room Service, Go West and The Big Store). Far from it. It’s that the new settings and style are most harmonious with, less catastrophic to, Chico’s character. In fact, in certain ways, at certain times, he comes out ahead, although the gains are brief and full advantage is never made of his being better suited to the changing milieu than his brothers.

Granted there were deleterious changes to Chico’s character as well. Gone now were the avalanche of puns and misunderstandings derived from his traditional vaudeville dialect humor, which had been funny precisely because they were an implausible stretch. The accent remained, but his joke material now consisted mostly of “stupidity” and simple-minded malapropisms. But unlike Groucho, for example, his status does not fall. Groucho had been the boss or the guest of honor in the first five movies. In the MGM ones he tumbles down to Chico’s plane (in A Night at the Opera, quite literally — he is thrown down some stairs). Groucho had always been screwy, illegitimate and manipulative, but never seedy or low-rent. Chico had ALWAYS been seedy and low-rent. Unless you’re talking about mathematical computation, Chico is not the high brow of the Marx Brothers. These dumbed down new Marx Brothers movies seem to fit him better than the other two. A racetrack, dodging a hotel bill, these are Chico places and predicaments. In A Night at the Opera and The Big Store he is made to have a relationship to the ACTUAL Italy, an unprecedented amount of realism for a Marx Bros. picture, no matter how cockamamie. This is CHICO’s world. So much so that in A Day at the Races, At the Circus and Go West Chico actually bests Groucho in several swindles and other encounters. In At the Circus, he’s actually the guy who hires Groucho — THAT is the new dynamic.  And though Harpo is by far the most entertaining, the least compromised, in these later films he also doesn’t quite BELONG there. For better or worse, Chico belongs there.

After the team broke up the first time (1941), Chico fronted his own big band, proving again that he was very in tune with the times. It was hip to be a musician in the ’40s. But his character was beginning to outlive its welcome, what with ACTUAL Italians like Lou Costello, Dean Martin, Tony Pastor (the singer), Vito Scotti, et al becoming popular on the radio and on movie screens. And at last we again reach a point where Groucho makes out better than Chico. After all, Groucho could grow a real mustache. Chico couldn’t become a real Italian.

At any rate, I offer this up merely as a way of looking at the team’s misguided last studio films. Nothing will make them less terrible, but they may possibly be made less inexplicable.