I groaned audibly upon hearing this news. Carl Reiner (b. 1922) has left us. And by “left us” I man just that. He was here with us (not in some mental fog in an old folk’s home) until mere days ago. I followed him on twitter — at the age of 98 no less, he was tweeting jokes and complaints about Trump all the time. It’s not a matter of obligatory rhetoric to say he will be missed.

Reiner was born the exact same day as Ray Goulding! What a great day for comedy. (And interesting to note…in routines with Sid Caesar and Mel Brooks, Reiner was usually a straight man very much analogous to the role Bob Elliott often played for Ray).

And now a bit of penance. I am afraid I was guilty of being more than a little dismissive of Reiner’s talents in the past. I’m not sure why. I think it was a combination of factors. I tended to rank him behind many of his Caesar cohorts in lifetime accomplishment (I did this most recently in my Larry Gelbart post). This added to the fact that he was frequently cast (or cast himself) as the straight man. Added to the fact that compared to Brooks and Woody Allen, he’s not a very intellectual director (and I thought a couple of his Steve Martin movies were terrible when they came out). But I did a little reassessment this morning, and realize what a blind spot this has all been. As you don’t need me to tell you, Reiner is a giant in American comedy, fully in a league with his old colleagues.

A French translator during World War Two, the Bronx born Reiner’s first professional experience was directing a U.S. Army French-language Moliere production. He then spent two years in Special Services entertaining troops. In 1946, he was in the army themed revue Call Me Mister, featuring Betty Garrett, Bob Fosse, and Jules Munshin, which transferred to Broadway. This led to parts in the Broadway revue Inside, U.S.A. (1948-49), with the unbelievable cast of Beatrice Lillie, Jack Haley, Jack Cassidy, Herb Shriner and Louis Nye. Then Alive and Kicking (1950) with Cassidy, Jack Gilford, Mickey Deems, Bobby Van and Gwen Verdon.

In 1960, he began performing his comedy two-act with Mel Brooks, the 2000 Year Old Man, in clubs, on tv variety shows, and on records (and later an animated film). This act has become the lightning rod for his deserved reputation as one of the best straight men in the history of American comedy, although there are plenty of other examples of this skill throughout his work.

From 1961 through 1966 he was the creator, producer, and occasional writer, director, and cast member of The Dick Van Dyke Show, one of the seminal situation comedies of all time, which was largely based on his experience writing on Your Show of Shows. His role as the slightly scary tv star Alan Brady was my first introduction to Reiner, I’m sure.

In the middle of this success he managed to co-write his first couple of movies, both romantic comedies directed by Norman Jewison: The Thrill of It All (1963), with Doris Day and James Garner, which he co-wrote with Larry Gelbart; and The Art of Love (1965) also with Garner, as well as Dick Van Dyke, Angie Dickinson and Elke Sommer. He also acted in the all star comedy It’s a Mad, Mad, Mad, Mad World (1963).

When The Dick Van Dyke Show went off the air, Reiner turned in a bigger way to films. First he acted in the Cold War comedy classic The Russians are Coming, The Russians are Coming (1966). Then he began writing and directing his own films. Almost every single one of his movies is interesting to talk about for one reason or another.

The first was the screen version of Enter Laughing (1967), about his early years of trying to break into show business, starring Reni Santoni, with Jose Ferrer, Shelley Winters, Elaine May, Jack Gilford, and Janet Margolin (who was also in Woody Allen’s Take the Money and Run and Annie Hall).

Then he wrote and directed the Broadway play Something Different (1967-68) with Gabe Dell of the Bowery Boys, Bob Dishy, and Linda Lavin.

In 1969 he was reunited with Dick Van Dyke for his 1969 silent comedy homage The Comic, which I wrote about in my book Chain of Fools.

In 1970, he directed the cinematic cult classic Where’s Poppa? with George Segal and Ruth Gordon, about a dude stuck in an apartment with his senile mother.

Then he returned to tv for awhile, writing for The New Dick Van Dyke Show (1971-74), and co-creating and writing for the Dom Deluise sit com Lotsa Luck (1973). 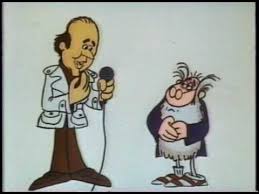 In 1976, a Broadway musical was made of Enter Laughing, called So Long, 174th Street starring Robert Morse. (It only played a couple of weeks).

Then he plunged into films in an even huger way, garnering some of his biggest box office successes. The first was Oh, God! (1977), penned by Gelbart and starring George Burns, a smash hit

Then, a forgotten one, which seemed plenty significant at the time, The One and Only (1978). This movie was heavily marketed because it starred Henry Winkler in our first opportunity to see him outside his Fonzie character  (way outside). At the time, I thought Winkler was great in this comedy about a little schlemiel who becomes a successful professional wrestler, but it tanked at the box office. People just wanted Fonzie. (That didn’t stop Winkler form playing Scrooge in An American Christmas Carol the following year).

Then came Steve Martin’s first feature, The Jerk (1979), which was naturally HUGE. Steve Martin was bigger than a rock star from his concerts and albums, and everyone went to see this movie. The pair teamed up again for Dead Men Don’t Wear Plaid (1982), The Man With Two Brains (1983) and All of Me (1984). Reiner also co-wrote the middle two films, both of which were stylistically innovative parodies (the first of film noir, the second of horror/ sci fi). At the time I thought they were pretty dumb, but given Martin’s overall movie career, they now rank among his better movies, I think. And All of Me contains some of Martin’s greatest moments of comic performance on film. So this period begins to measure up in my estimation.

Martin moved on to other collaborators at this stage, but Reiner continued directing. In 1985 there was Summer Rental with John Candy, a modest little comedy that I very much enjoyed at the time.

Then things took a downturn. He directed Summer School (1987) with Mark Harmon (?!). Can I get a WTF? Then, he wrote and directed the all English musical Bert Rigby, You’re a Fool (1989). Then Sibling Rivalry (1990) with Cheers star Kirstie Alley (who’d also been in Summer School) and Carrie Fisher, Sam Elliott, Bill Pullman, Ed O’Neill, and John Randolph.

Then things look up a little with Fatal Instinct (1993), a Zucker Brothers style mash-up of Basic Instinct and Fatal Attraction that reveals the same comic hand that had made Dead Men Don’t Wear Plaid and The Man With Two Brains. (Yes, Reiner had pioneered this sort of thing in sketches decades earlier, but the marketing and packaging of this film, its very existence at this stage owes something to the popularity of the Zucker-Abrahams-Zucker comedies). Reiner’s last film as director was the romantic comedy That Old Feeling (1997) with Bette Midler and Dennis Farina. (Yes, Bette Midler had to kiss Dennis Farina).

In his later years, Reiner mostly wrote books and performed cameos and other small roles, most notably in the Ocean’s Eleven films (2001-present). And he tweeted! Not bad as he approached 100! At any rate, we owe him every bit of honor we can muster. My apologies for past myopia.

To find out more about the variety arts past and present, consult No Applause, Just Throw Money: The Book That Made Vaudeville Famous and don’t miss Chain of Fools: Silent Comedy and Its Legacies from Nickelodeons to Youtube. You you will find them not irrelevant to the comic art of Carl Reiner.