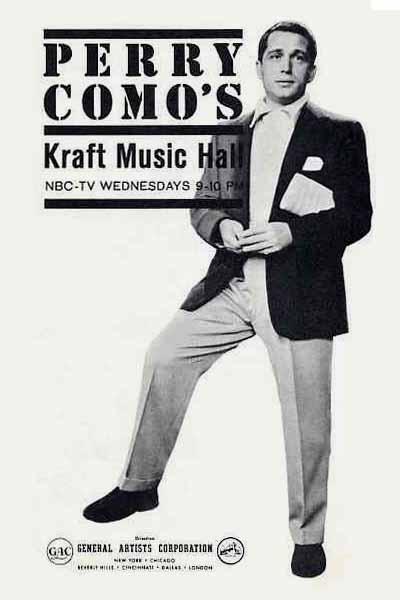 Buon compleanno, Perry Como (Pierino Como, 1912-2001). When I was a kid, Como was an occasional presence on television, in the form of annual Christmas specials and the like, not unlike Andy Williams. He had a reputation for being “casual” or “natural” and “relaxed” and for wearing cardigan sweaters. (Eugene Levy did a hilarious parody of him on SCTV, so relaxed that he was practically catatonic, singing his sets lying down on the stage.) At the time, to me, Como was just a boring old guy. I’m not sure that he excites me any more today, but I do find myself interested in the role he played in broadcasting (as opposed to pop music) history. TV variety shows being a kind of “vaudeville by other means”, his career would seem to fall under our purview.

Como was a singing barber from Western Pennsylvania (literally — his first experience singing in public came from crooning while he cut heads). In 1932, while he and his friends went to Cleveland to hear a dance band led by Freddy Carlone, the bandleader invited audience members to come onstage and sing. Como did, and made such a hit that Carlone hired him. Three years later, he was hired away from Carlone’s band by the much more high profile Ted Weems. With Weems’ orchestra, Como cut record albums, and made radio appearances on The Jack Benny Program, Fibber McGee and Molly, Beat the Band and Weems’ own weekly show.

Como quit the Weems band in 1942, intending to spend more time with his family and return to his barber shop, but was given a highly attractive offer to host his own radio program based out of New York City, where he could also play high profile engagements at clubs like the Copacabana and make records. On the heels of his original unsponsored program on CBS, he moved to a new show The Chesterfield Supper Club in 1944.

Meantime he was tried in movies, appearing in the pictures Something for the Boys (1944), March of Time (1945), Doll Face (1945), If I’m Lucky (1946) and Words and Music (1948). But Como was no actor. He was much happier singing and hosting variety programs. In 1948, The Chesterfield Supper Club began televising their programs as well, becoming one of the first tv variety shows. Como would be fronting such weekly tv variety shows for the next two decades. The Supper Club was succeeded by The Perry Como Chesterfield Show (1950-55), then The Perry Como Show (1955-59), and then Kraft Music Hall, which he hosted from 1959 through 1967.

It’s worth breaking out the Kraft Music Hall now, for it had its own separate history parallel to Como’s career. Sponsored by Kraft Foods, it initially debuted on NBC radio as The Kraft Program in 1933 with Paul Whiteman as the host. In 1936, Bing Crosby (formerly with Whiteman’s band) took over as M.C., a job he held for ten years. Then came several short term hosts: Edward Everett Horton, Eddie Foy Jr, Frank Morgan and Nelson Eddy. Al Jolson famously hosted from 1947 through 1949, going out in a burst of glory (he died in 1950).

Meanwhile Kraft had launched Kraft Television Theatre in 1948, this dramatic anthology series was to be the company’s main tv presence for the next decade. In 1958, they revived the Kraft Music Hall idea. Milton Berle was the initial host, but audiences were getting tired of Berle by that point, so Como came in, hosting the show through 1967. Hiring Como for the job was a perfect stroke. Not only had he been a popular tv m.c. since the very beginning, but he was also an exact contemporary of the music hall’s radio host Bing Crosby, with a very similar crooning style and personality.

After Como left, a wide variety of other entertainers(including Eddy Arnold,above) hosted the Kraft Music Hall through 1971 when it was cancelled as part of the industry wide “rural purge”, being considered a real throwback to earlier times.

Meanwhile Como gave live performances, continued to record, and came back to TV every few months to anchor specials, often broadcast from far flung locales (the most historic of which was undoubtedly the Vatican). His last Christmas special was in 1994. From 1989 until his death he hosted a weekly syndicated radio show Weekend With Perry.