An unabashed mash note today to stage and screen actor William Daniels (b. 1927).

Daniels is one of a handful of actors who gives me a delight that is almost uncontainable, every second he is on screen. (Who else? Jonathan Harris and Charles Laughton are the first two who spring to mind, pretty much at random). I like actors to be mannered and studied and elaborate self-created entities. Daniels’ characters are often brusque, irascible and unsentimental snobs, highly entertaining in their self-satisfied willingness to badger and insult. He is the embodiment of my beloved “rude” Northeast, and sadly a dying breed. His characters are conservative elitists — traditionalists. Reagan era populist conservatism has almost entirely killed that as a thing. (I’m digressing wildly here, but I remember being appalled when one of the Bush Presidents made a joke about “Taxachusetts.” The Bushes are in fact New England bluebloods who reinvented themselves as Texans. My sort of conservative President, were I to have such a thing, would NEVER forget that Boston was the cradle of the American Revolution. EVER.) But it’s not such a digression, as you will see. Daniels and his characters symbolize something. (I should also quickly add the Daniels himself is not a conservative. He supported Bernie Sanders in 2016).

Believe it or not, Daniels’ Bostonian manner was acquired. He was actually raised in a working class family in East New York, Brooklyn. I am very interested to note that Daniels is not a stage name. He appears to be of WASP stock. We have a tendency to think of native New Yorkers as all immigrants. As the centuries have rolled on, the first layer of Anglo stock that lives here has been forgotten in popular culture. (One reference that springs immediately to mind is the fictional Brewster family in Arsenic and Old Lace). Daniels’ father was a bricklayer, his mother a telephone operator. He and his sisters were child performers during the Depression, driven to sing and dance by their domineering stage mother. In 2017 he made a publicity junket in support of his memoir There I Go Again, in which he described his upbringing as exploitative and abusive. Yet it is hard to regret it — it gave us HIM. Daniels sang on the radio, and even a very early television broadcast in 1943. He went into the long-running Broadway hit Life with Father when still a teenager, then served in the army as a disk jockey during World War II. He got his drama degree at Northwestern on the G.I. Bill. And this is surely where and when Daniels carefully cultivated his Boston accent and persona, burying the Brooklyn, and birthing the Brahmin.

I was amused to read in an article just now the assertion that most people today know Daniels primarily from the tv show Boy Meets World (1993-2000), a show I had never even heard of. We all have our generational biases. Personally, I consider his role as Dr. Craig on St. Elsewhere (1982-88) to be his acme, but even from that point of view it should be pointed out that Daniels was ALREADY a widely known quantity at that stage (which is why he gets star billing on the show). He brought with him decades of associations to the part. We expected certain things from him, and we got ’em! Daniels had been a stage and screen star presence since the early 1950s. In 1960 he originated the role of Peter in the off-Broadway premiere of Edward Albee’s The Zoo Story. The Broadway and movie versions of A Thousand Clowns (1962; 1965) had been his breakthrough. In 1967, he played Dustin Hoffman’s supercilious suburban dad in the movie The Graduate, and starred in his own short-lived sitcom Captain Nice, created by Buck Henry. 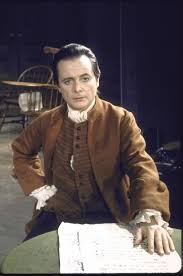 Daniels’ “Boston” association was truly cemented as of 1969, when he played John Adams in the Broadway musical 1776 (he was nominated for a Tony, but refused it on a technicality). This began a LONG history of portraying various Adamses. He reprised his role as John in the 1972 movie version of the musical. He played John Quincy in the miniseries The Adams Chronicles in 1976. (Apparently he had earlier also played him in a 1952 live television production about Abigail Adams, although that has now fallen into obscurity). He also played Sam Adams in the TV movie The Bastard (1978), and John again in The Rebel (1979). Cleverly, his character on Boy Meets World, Mr Feeny, teaches at John Adams High School. The marriage between Daniels’ personality and the historic Adamses is magical. John especially was known for being famously unlikable — a man who was uncompromising and honest to a fault.  In a word, he was no Captain Nice. In contrast with the Revolutionary leaders from the South, who were courtly and diplomatic, Adams did not mince words. I’ve never forgotten a discussion question posed by my Junior High U.S. history teacher: “Why do you think the Adamses were both one term Presidents?” They were men who did not sugarcoat things. It is a trait that is both a virtue and a fault. It is what we mean when we use the word “Independent”. Characters with traits like that are rewarding to both play and watch.

Thus, as I say, by the time St. Elsewhere launched, Daniels was a highly recognizable, even cherished figure. And the show played on this identity. As Mark Craig, Daniels chewed the scenery, berating protege Victor Ehrlich (Ed Begley Jr) and constantly making demands of his long-suffering superior Dr. Westphal (Ed Flanders). Furthermore, his wife on the show was played by his real-life spouse actress Bonnie Bartlett, to whom he had been hitched since 1951. As it happens I am deep into binge-watching the series at the moment, after a break of nearly 40 years, and finding the experience highly rewarding. Daniels’ genius lies in making us love Dr. Craig, no matter how horrible he is. Sometimes we love him for the very reason that he IS horrible. If you can pull a hat trick like that off, it’s the whole shooting match.

Daniels has never retired, he has scores of credits post-St. Elsewhere. In addition to Boy Meets World, he did the voice of the car on Knight Rider (1982-86), and most recently had recurring parts on Grey’s Anatomy (2012) and Girls Meets World (2014-17). He is, to say it in his accent, a troupah.