Dustin Hoffman and the Descent of Hollywood

As far as I’m concerned, the jury is out on Dustin Hoffman’s 2017 sexual misconduct allegations, and if they are true, I think we can safely talk about his work as an actor as an independent topic. He hasn’t realy worked since then I notice, though he was slated for some projects that would have happened this year, though the pandemic intervened. He’s 83 at this writing. It may be a propitious moment to Go into that Dark Night gracefully, whether he really wants to or not.

I don’t say that lightly. I grew up on his performances. His body of work matters to me. It’s just that we’re all riding a whirlwind of fire and chaos now. Why add to it when you could be sitting in the sun reading a nice novel? Just a thought.

But he is a contrarian soul, and was from the first. Consider this. He is FROM Hollywood. His father was a prop man, and he himself was named after western star Dustin Farnum! Yet in spite of this, instead of staying THERE and breaking into films surrounded by a support network, he went EAST to New York as a young man to study at the Neighborhood Playhouse and the Actors’ Studio and to earn his first stripes in off-Broadway plays! This deserves respect and he has had much of it.  Incredibly, his room-mates at this early juncture were Gene Hackman and Robert Duvall, two professional fellows who, like him, ought to have been character actors and would have been in earlier or later eras, but wound up as leading men through an accident of timing.

Hoffman’s breakthrough was of course The Graduate (1967), in which he played an upper middle class kid eight years his junior. It was THE film of 1967, directed by Mike Nichols, co-written by Buck Henry, music by Simon and Garfunkel, full of the angst of youth and satire about America’s aimless materialistic society. My older brother loved this movie so much he went to see it at the cinema several times. He was a little younger than Hoffman’s character Benjamin Braddock at the time and it hit him HARD. There is melancholy in the performance, but also classic humor — there are moments when it seems like a Nichols and May sketch elaborated to feature length. 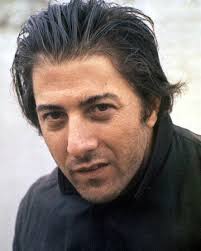 The world was Hoffman’s oyster at that time, yet he opted to return to the stage to star in Murray Schisgal’s 1968 Broadway musical Jimmy Shine. He should have done this a lot more. But few can resist Hollywood. In 1969 came John Schlesinger’s Midnight Cowboy, my favorite of all of Hoffman’s performances. I re-watched it recently (I think it was in circulation for its 50th anniversary) and it hit me as hard as when I first watched it as a young man. Just a work of poetry, the whole film, but also Hoffman’s meticulous, detailed, risky performance as Ratso Rizzo. If Shakespeare had written a character to embody Times Square in the XXX era, this would be it (the fact that the film itself got an X rating kind of solidifies the whole package in amber). I could rave about this film for 10,000 additional words — some other time.

For me, Hoffman’s magic period goes through the mid ’70s or so. Some of the films were a little more experimental in the spirit of the times and have fallen by the wayside. John and Mary (1969) probably sounded like a producer’s dream at the time, directed by Peter Yates fresh off of Bullitt, and co-starring Mia Farrow, direct from Rosemary’s Baby and Hoffman right after his two big hits. But it’s a quiet, impressionistic little romance in the New Wave tradition. It sank quietly. And then there’s Who Is Harry Kellerman and Why Is He Saying Those Terrible Things About Me? (1971) a dark comedy by Herb Gardner and Ulu Grosbard, costarring Barbara Harris, Dom Deluise, Jack Warden, and Gabe Dell. Better remembered are Arthur Penn’s Little Big Man (1970), Sam Peckinpah’s Straw Dogs (1971), Franklin Schaffner’s Papillon (1973), Bob Fosse’s Lenny (1974), and Alan J. Pakula’s All the President’s Men (1976). Man, what a streak!

Then…something happened to Hollywood. I think what happened was Jaws (1975) and Star Wars (1977). Do not get me wrong! I think those are two PERECT Hollywood movies, full deserving of their monster success. But after this, the bar seems to have moved. The financial stakes seemed to get higher. Risk and experiment were discouraged. Hoffman continued to work with great directors, and he always does great work himself, but to my mind, the product gradually grows cheesier. Schlesinger’s Marathon Man (1976) and Michael Apted’s Agatha (1979) are transitional. They are entertaining. If I had to give them a letter grade, I might give them a B? B minus? But a major question is: do they require someone with Dustin Hoffman’s acting chops? (Or Olivier’s?)

Some may fight me on this next batch, but I stand by it: Kramer vs. Kramer (1979, Robert Benton), Tootsie (1982, Sydney Pollack), and Rain Man (1988, Barry Levinson), Oscars or not, are typical self-congratulatory, Hollywood cheese. Hoffman put himself out there as always, but I am not hugely impressed with the screenplays to these things. They’re pretty simple-minded, by the numbers entertainments. One imagines that Hoffman himself was dissatisfied at least subconsciously, about the experiences, because this is the very time he went back to Broadway to star in Death of a Salesman (1984) and The Merchant of Venice (1989-1990). Both are really great performances — far more enjoyable to me than those middle-brow movies.

And over the decades you can see him struggling to balance out these stupid Hollywood projects with actual movies for grown ups. On one side of the ledger you have these dumb high concept embarrassments like Sidney Lumet‘s Family Business (1989), Warren Beatty’s Dick Tracy (1990), Steven Spielberg’s Hook (1991), Wolfgang Petersen’s Outbreak (1995), Levinson’s Sphere (1998, based on the Michael Crichton novel), and those egregious Fockers and Kung Fu Panda movies. In the credit column, you could put Michael Corrente’s adaptation of Mamet’s American Buffalo (1996), Levinson’s Wag the Dog (1997, also with a script by Mamet), David O. Russell’s I ♥ Huckabees (2004) and Noah Baumbach’s The Meyerwitz Stories (2017). In between you might put some middling things like Billy Bathgate (1991) in which he played Dutch Schultz, Stephen Frears’ Hero (1992), and his respectable turn as Charles Frohman in Finding Neverland (2004).

But the point is…but the point is….that early promise. Every performance in his career might have been like that, if we had had an industry that provided the opportunities. Watching this great actor take all these shit roles that any schmo can play is a drag.

Yes, I know Dustin Hoffman is famous for playing schmoes. But he’s not just ANY schmo!