Tempting though it be to do an entire post about one of the most awesome tv shows ever, The Rockford Files (1974-1980), it would be unfair to the late James Garner (James Bumgarner, 1928-2014), whose career had many high points over half a century +. These are the five phases:

Garner was a native Oklahoman who spent part of his teenage years attending Hollywood High in Los Angeles, where one of his friends was James Gregory (perhaps best remembered as Inspector Luger on Barney Miller). Good-looking, beefy and on the tall side (6’2″), Garner did a little modeling work when in high school but didn’t much like it. When still a teenager he served in the Merchant Marine at the very end of World War Two, and later served in the army during the Korean War, receiving two Purple Hearts. In 1954, at the instigation of Gregory he took a role as a supernumerary in the original Broadway production of The Caine Mutiny Courtmartial, where, legend has it, he learned to act by watching star Henry Fonda perform every night for a year. When the show closed, Garner moved back to L.A., where he broke into tv and films within just a short months. He was one of the few genuine naturals in the field, with an affable personality that somehow could skate between sincerity and a hilarious insincerity (sarcasm, smarmy charm) which became kind of his trademark. He was reportedly cast as the lead in the western series Cheyenne in 1955, but couldn’t be reached, so the part went to Clint Walker, though Garner acted in several episodes, including the pilot. His first film was Towards the Unknown (1956) with William Holden, where his military experience stood him in good stead.

In 1957 came the hit western series Maverick, which made a star of Garner (in alternating weeks with Jack Kelly). Recall, he had only been in the business a couple of years! His role as Bret Maverick, the charismatic professional gambler, cemented his screen persona — a guy who was always getting in trouble, frequently trying to charm and talk his way out of it (rather than fight), but often having to fight anyway when the charm didn’t work. It allowed him to be both serious and lightly comical and this had enormous appeal with the public. In 1960 he left the series over a contract dispute, although he would revisit it in The New Maverick (1978), Young Maverick (1979), Bret Maverick (1981-82), and he would later play a different character in the 1994 Mel Gibson Maverick reboot.

Garner’s flexible, strong but kindly persona made him a valuable movie star during the 1960s, alternating between roles as an action hero and a leading man in dramas and light comedies. His tv roles loom so large in Garner’s legend that we often forget the movie career, but he was in a lot of major films. These included: The Children’s Hour (1962), The Great Escape (1963), The Americanization of Emily (1964), Hour of the Gun (1967), Marlowe (1969, which in some ways feels like a dry run for The Rockford Files), Support Your Local Sheriff (1969) and Support Your Local Gunfighter (1971). The romantic comedies were so plentiful they constitute an entire subcategory: Boys Night Out (1962), The Thrill of it All (1963), Move Over Darling (1963), The Art of Love (1965), and How Sweet It Is (1968), with Doris Day and Debbie Reynolds as the typical leading ladies for these kinds of films.

Also during this period, Garner starred for one season in a highly original TV western series called Nichols (1971-72) in which he played an Arizona sheriff in the early 20th century who got around by motorcycle and automobile rather than horse, and preferred not to use guns. The series co-starred a pre-Superman Margot Kidder, and featured Stuart Margolin, shortly to play a key role in Garner’s next series. 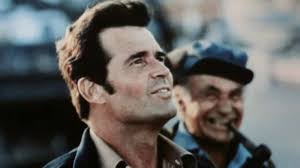 In 1974 Garner hit pay dirt in the role of private investigator Jim Rockford. Like his previous tv characters, Rockford was an-antihero, an ex-con who’d been unjustly incarcerated and now lived and worked in a trailer at the beach in L.A. Rockford charged high fees, but a combination of a big heart and bad luck (including constantly needing to bail himself out of jail) kept him broke. The world in which his character he lived was treacherous, and Rockford was constantly being betrayed by both his police contact Dennis (Joe Santos) and his ex-cellmate stoolie Angel (Margolin). Even his father Rocky (Noah Beery Jr) and lawyer/ sometime lover Beth (Gretchen Corbett) seem not to always be there for him. So he must navigate a hostile world with his wit and his wiles, usually getting the shit kicked out of him in the process (very much like a latter day Bogart). Shot against the colorful backdrop of 1970s L.A., the show has only gotten better with age.

Like Columbo, which was on at the same time, The Rockford Files is full of colorful Hollywood types, but unlike the former show, they were only sometimes socialites — just as often he moved among sleazy bottom feeders. Also The Rockford Files has one of the most exhilarating credit sequences in history, ranking with that of Hawaii Five-O: catchy, eloquent, exciting theme music, playing over a sequence of still photos of Rockford at work, shot as though he were being spied upon by another private eye. As with Maverick, Garner came back to the Rockford well many times. The original series ended in 1980, but he  reprised the role in a series of tv movies between 1994 and 1999.

Most stars coming off a series and role as indelible as Rockford can’t transcend it to take other parts in the future. But luckily producers and directors remembered that Garner had been a great star prior to The Rockford Files, and so he got numerous other terrific role throughout the balance of his career. He was great in Robert Altman’s Health (1980), although no one got to see it at the time; he starred opposite Lauren Bacall (who was also in Health), in The Fan (1981); he had a huge hit in Blake Edwards’ Victor Victoria (1982); another big hit (and Oscar nomination) in Murphy’s Romance (1985); a cool reprisal of his portrayal as Wyatt Earp in Edwards’ Sunset (1988); the lead in the HBO docudrama Barbarians at the Gate (1993); the part of Captain Call in the Lonesome Dove sequel series Streets of Laredo (1995), in which he played against type impressively well;  was part of the all he-man ensemble in Clint Eastwood’s Space Cowboys (2000); and much else through 2010.

In 2011 he published The Garner Files: A Memoir, in which he revealed what many might have intuited: he was a major pothead! No wonder he was so loose and easygoing in front of the cameras!