The Winning Formula of “McMillan & Wife”

“Everything goes in threes” is the rule. And so it was on the NBC Sunday Mystery Movie, despite having four rotating shows at any given time. Somehow whatever the fourth show was never caught fire with the public and it was always being replaced. But Columbo, McCloud and McMillan & Wife were all widely loved. Having already done tributes to the first two, we must now obey the law and do the third for Rock Hudson’s birthday.

McMillan & Wife ran from 1971 through 1977 (with drastic changes in the last season, which we’ll get to.) If nothing else, it was a work of high concept producing excellence. It was common at the time (late 1960s/ early 1970s) to try and devise vehicles that would appeal cross-generationally, in light of the fact that a famous “Gap” now separated the old and the young. 99 times out of 100, those efforts failed spectacularly, given the unavoidable fact that the differences between the generations was so great. That was the crux of the problem. How do you make a show or a movie or a song, hip enough for kids, but square enough for adults? But for whatever reason (casting, I think), McMillan & Wife actually got it right. 1950s Hollywood hearthrob Rock Hudson played 40-ish San Francisco police commissioner Stuart McMillan; Susan Saint James was his hippy-ish 20-something wife (this was San Francisco, after all). And, implausibly though delightfully, the two went around solving murders together.

If you think about it, it’s only partially implausible. Police commissioners are often political appointees; I would imagine in real life their skill sets are often the opposite of “the art of detection”. But when they are former cops, as this character was, you can justify it in terms of story logic. Justifying the titular wife’s involvement gets harder, but it’s all in the doing. In this case, the very artificiality of the set-up and the tone are what sells the stretchers we are asked to swallow in the plot. The show had a certain amount in common with The Thin Man. Mac and Sally are a sort of All-American Nick and Nora. There is a lot of breezy comical repartee. There is a lot of glamour; as an important political couple, they are always attending functions, hobnobbing with VIPs, and so forth. And there’s even a screwball style ensemble: their comical wisecracking maid Mildred (Nancy Walker), a lummox like police sergeant (John Schuck) who was Mac’s aide, and Mac’s passive aggressive mother Beatrice (Mildred Natwick). (Natwick was later rewarded with her own show on the NBC Mystery Movie series, The Snoop Sisters, in which she co-starred with Helen Hayes).

At all events, the calculation paid off in this particular case. Hudson appealed to older people; Saint James appealed to younger ones. 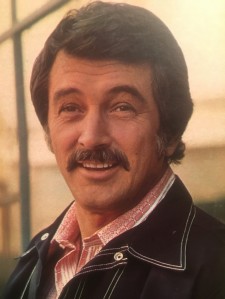 Rock Hudson was a particular idol of my mother’s; he was absolutely one of her favorite stars from back in the day (and the proof was in the pudding, my father was handsome and masculine in similar ways, and she often pointed it out.) Hudson appealed to both men and women of the older generation. He had been in tons of westerns, but he had also acted in many soapy melodramas, most notably Douglas Sirk pictures like Magnificent Obsession and Written on the Wind. And then of course there was Giant, which, through the savvy of Edna Ferber, was BOTH a western AND a soap opera. (George Stevens, who had also directed Shane, was one of my father’s favorite directors). On top of all that, Hudson had done all of those light comedies with Doris Day and others. He was associated with light, bantery repartee with female partners, and he could deliver it.

While much younger, Susan Saint James also brought a track record and past associations to the table. She was only 20 when she had appeared in the popular TV movie Fame is the Name of the Game (1966), which then became the series The Name of the Game (1968-71). On that show, Saint James had played a young research assistant at a magazine, constantly interacting with dudes like Tony Franciosa, Gene Barry, and Robert Stack, the last two of whom at least were from Hudson’s generation. She’d also done other movies and TV. She had this kind of effortless confidence that allowed her to interact as an equal with these older stars, a sort of cool, indifference to their facades of gravitas and inflated self-importance that pretty much communicated what the Generation Gap was supposedly about. She seemed real, natural, honest and open…in contrast with the artificial formality of these old dudes. All while still being billed as “& Wife”, which is not worlds away from being “…And the Rest” in the opening credits to Gilligan’s Island.

The final season of the show pretty much threw all the winning elements out the window, guaranteeing that it would in fact be the last season. Saint James left to pursue a movie career, the equally popular Walker left to star in her own sitcom, and even Schuck was now starring in his own sitcom (Holmes and Yo-Yo, which we wrote about here), reducing the Sgt. Enright role to a recurring part. This left Hudson rather pathetically clinging by his thumbs to a retooled show called simply McMillan. The premise was that Sally had died in a plane crash! And Mildred’s sister, played by Martha Raye, was his new maid! Well, audiences cried “lame!” and this innovation was disappeared very fast.

As it turns out, Saint James’ movie career was not very stellar, but she went on to do the sitcom Kate and Allie (1984-89) with Jane Curtin, which was. Hudson went on to do just the kind of things you think he would go on to do: the disaster movie Avalanche (1978), the sci-fi mini-series The Martian Chronicles (1980), the Agatha Christie mystery The Mirror Crack’d (1980), a failed series called The Devlin Connection (1982), and a regular role on Dynasty (1984-85). Then in 1985, he died of AIDS-related complications and his private life became known to the public. It was tragic, but his outing was a crucial moment in greater widespread acceptance of the LGBT community, I think — or at the very least, the G part of it. My mother? Was not about to stop loving Rock Hudson.